This is a lightweight, performance wing that is aimed at the mountain pilot who wants to save weight while keeping XC performance. Photo: Charlie King
EN-C, Reviews

Marcus King flies this lightweight EN C from Austria’s king of the mountain.

Previously known as the Akrominator and infamous for creating the 13.01 aspect ratio Deathblade, Austrian designer Markus Grundhammer metamorphosed into the Skyman nearly 10 years ago. From full-on acro star, Markus discovered the more tranquil charms of hike-and-fly in the mountains. This change in pace influenced his design and he started to make lightweight wings.

His first gliders were double-surface, but Skyman are now probably better known for their single-skin wings, including the Sir Edmund series. So when Skyman announced a successor to their original EN-C CrossAlps, released in 2015, I was keen to finally try one of their double-surface XC gliders. 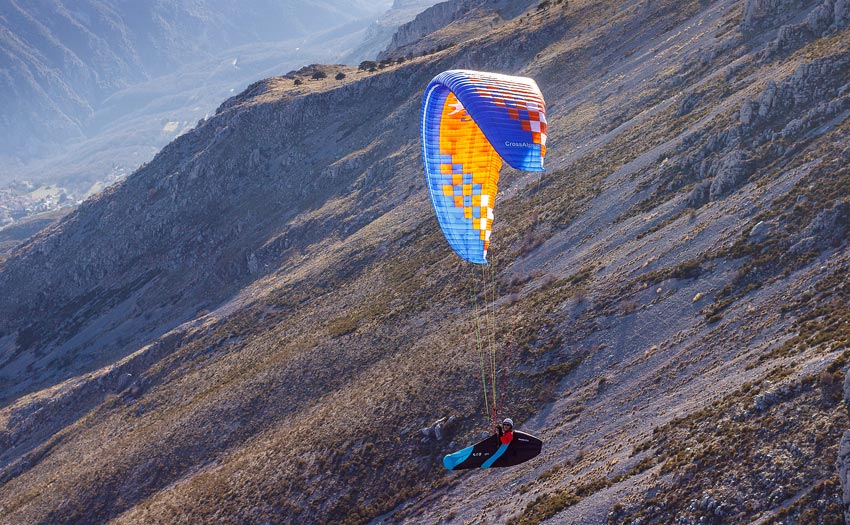 The CrossAlps 2 has a relatively high aspect ratio of 6.5. The tips are trimmed a little faster, so in the air this shows in the management of yaw. You need to get used to correcting them, and occasional minor tip tucks remind you to fly actively. This design is deliberate and is to allows the wing to lose energy without having to suffer a big collapse. Photo: Charlie King

When company manager Stefan Kurrle sent through details of the wing I was surprised to find the 26, my normal size, goes all the way up to 115kg. I clip in at just over 100kg so was a bit worried the wing would be too big, but Stefan assured me it was the right size. “We wanted a wide weight-range so depending where you fly you can choose the best wing loading. In Germany, for example, flatland pilots want a wing with a metre more surface area for a better sink rate and those in the Alps want a metre less.” In terms of wing weight the 26 I flew comes in at 4.35kg, the same as an Ozone Alpina 4 L which goes to 115kg (although I would normally fly the ML Alpina 4 which weighs 4.1kg). It’s a bit heavier than the Little Cloud Urubu which uses similar materials and is 4kg for the 26.

Flat aspect ratio is fairly high at 6.5, putting it higher than the likes of the BGD Cure 2 and indeed the original CrossAlps at 6.4. Interestingly, the wing appears to have more curve, as the projected aspect ratio quoted is lower than that of the Cure 2. The glider has 69 cells, a modest increase of two over the original. 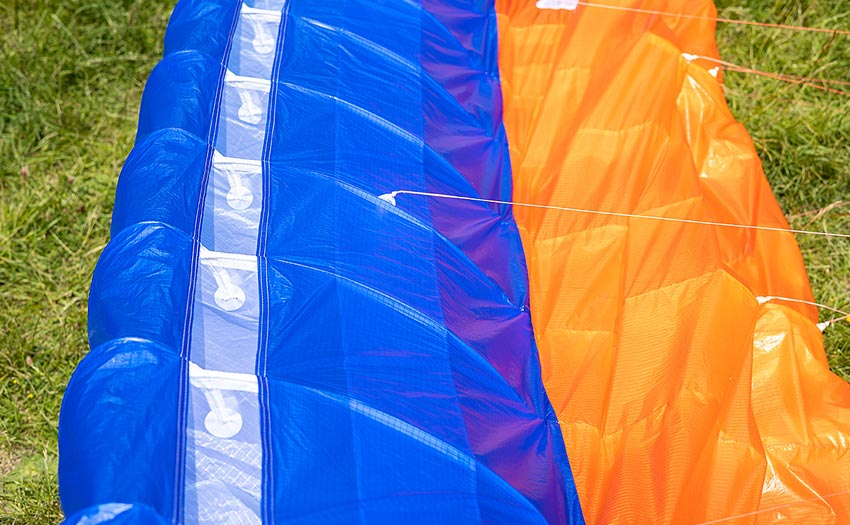 The wing is made of a mix of Dominco D10, currently the lightest material in full production, and double-coated D20 on the top of the leading edge to make it a bit more robust.

The top surface is kept smooth with the use of double 3D shaping seams. The sharknose is formed using relatively short twin nylon rods, making packing easier. There is also a short semi-circle of nylon wire over the C-attachment points to spread the load. Its mountaineering  pedigree is shown by the snow stakes sewn into the leading edge which are held in small pockets.

On the rear of the wing are mini-ribs, which smooth this important part of the aerofoil. Looking up, there are a number of spanwise tapes visible through the undersurface to tension the span. It has a distinctive colour scheme with a chequered design towards the tips, which drew some admiring comments on our take-off. 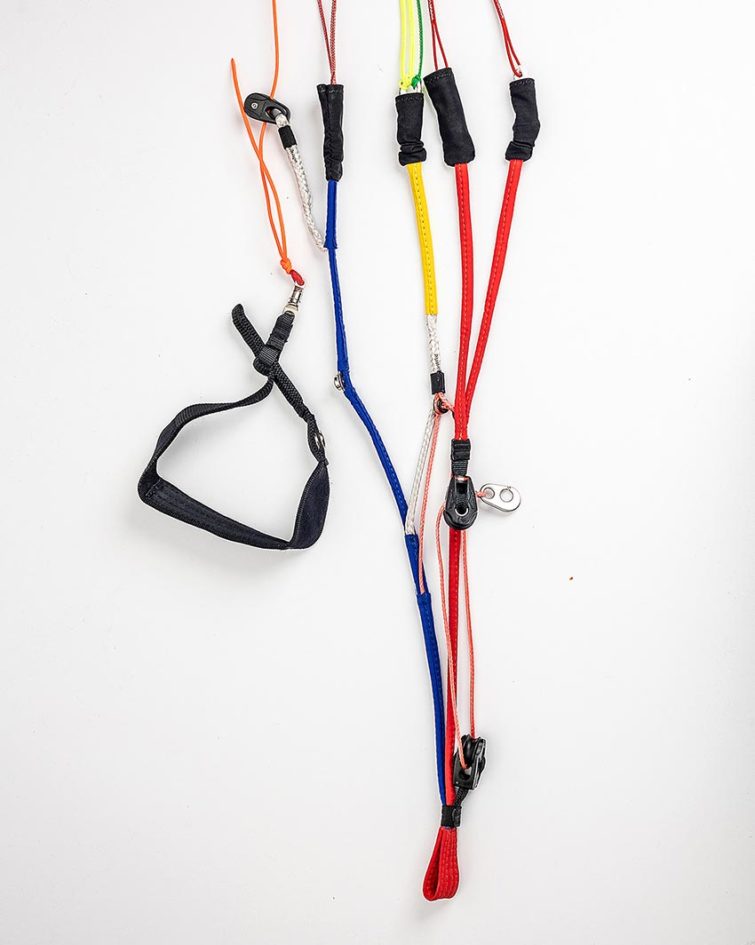 The line layout is a pure three-line layout with only two main lines on each riser. The lower lines are sheathed except for the C’s, which although unsheathed are still relatively thick: a choice probably made more for the shrinking behaviour than drag reduction. Stefan confirmed this: “We used Edelrid 8000 lines, as these shrink much less than Dyneema lines under the low loads present there. This line mix makes the glider more trim-resistant.” The upper lines are fully unsheathed.

The lines connect via softlinks enclosed in material tubes that are sewn to the top of the risers to keep everything neat. The risers are made from Dyneema rope but are wrapped in material to make them easier to handle. I have to say these are some of the nicest lightweight risers I have used: easy to handle and colour-coded. The covering also has the effect of making them a bit stiffer, which also helps the handling. 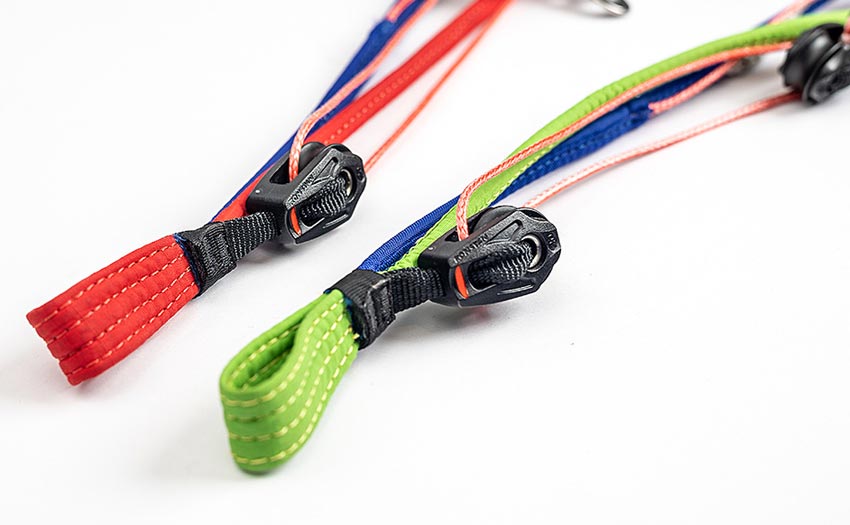 Colour-coding of the risers makes clipping in easier. Colour-coding continues to the A’s and lines making handling on the ground very easy. Unusually Skyman have used unsheathed line in the speed system setup.

The speed system uses large Ronstan pullies with small ceramic loops on the B/C trim adjustment. There is no handle on the rear riser for controlling the wing although you can of course pull on the risers, but there is no B/C connection; Skyman decided it wasn’t needed.

The brake handles are relatively large, unpadded webbing with stiffening inside. They attach to the risers with strong traditional poppers and are fitted with swivels. It’s clear a lot of thought has been put into the riser set.

The glider came with Skyman’s concertina packing bag, which is nice but a tad heavy.

Despite that high aspect ratio the wing is well behaved on launch and doesn’t seem to need a massive amount of management. It comes up smoothly and easily without any tendency to go off to one side or stick. What is nice is the ease with which you can control the rise with pressure on the A’s. It also doesn’t feel like it’s going to overshoot, just the lightest dab of brakes and it stays overhead.

The light weight of the canopy certainly helps it fill easily but I didn’t find it a handful in stronger wind, and it was easy to keep it on the ground with the rear risers.

The wing is a pure three-liner with no birfurcation of the C at the canopy. There is no mistaking who makes this wing

In the air I would say the brakes have a solid feeling, effective and precise. The first couple of centimetres feel a bit springy, then they harden up and you can flick the wing round quite easily. Going deeper, the pressure ramps up nicely and there is plenty of travel.

The effective brakes make catching surges easy although this isn’t a wing that pitches much. In terms of workload it feels no more demanding than most of the C’s I have recently flown. In terms of smoothness it sits between the Ozone Delta 4, which has a very planted feel, and the Flow Fusion, which moves around a bit more. I would say there is a little less feel through the brakes than the other two, although there is still enough to make the most of the lift.

Where the extra aspect ratio does show is the management of yaw. I found the wing can yaw more easily than some other gliders I have flown recently. One morning I took off early and was working lift on a 45-degree rocky slope. The day hadn’t really got going but small thermals were firing out of the rocks. This caused the wing to yaw as I flew in and out of them as they were too small to turn in.

If you don’t control the yaw you will be informed by small tip tucks as the angle of attack at the forward tip becomes too low. They are no big deal and flick out quickly; in fact they are a reminder that you need to be flying the wing that bit more, so not such a bad thing. It’s much better to have to manage these than being surprised when a big collapse seemingly hits you out of nowhere.

During my first couple of flights I did get a few tip tucks but as I settled down with the wing they generally went away. However, it does feel like the tips are trimmed with quite a low angle of attack or less pressure. Stefan confirmed this is the case: “Yes it is deliberate. We trimmed the tips a bit faster in order to optimise the glide against the wind, it also improves the handling and agility.

“As a side effect the stability of the outer cells is slightly lower. This has the advantage that disturbances are indicated more quickly and without the dynamics of larger collapses. Once you get used to the wing you intuitively correct them with small brake inputs.”

Certainly, I didn’t get any big side collapses while flying it, even in some quite rowdy air. 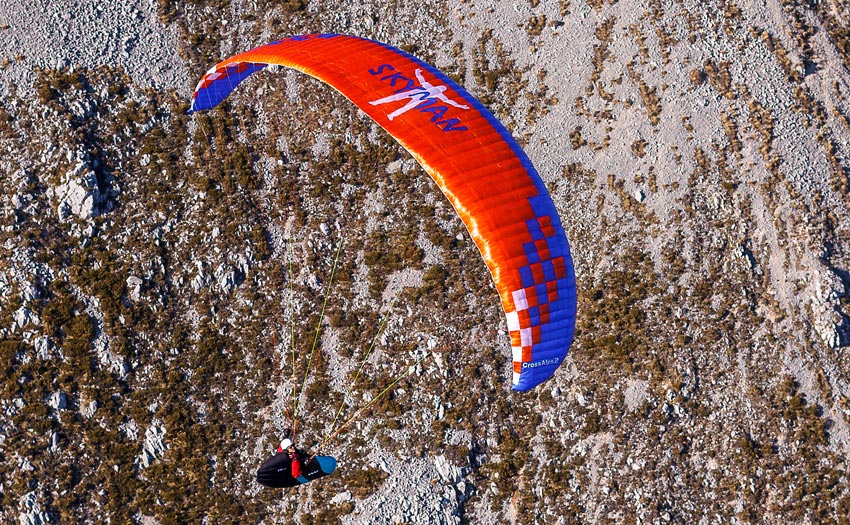 This is a lightweight, performance wing that is aimed at the mountain pilot who wants to save weight while keeping XC performance. Photo: Charlie King

On glide, bar pressure is reasonably light so it is easy to use. Full pulley-to-pulley gives an extra 13-14 km/h over trim with no obvious weakness in the nose. Having said that, I found myself habitually gliding at about three-quarter bar.

When on bar there is little tension on the C’s with most of your weight hanging from the A’s and B’s, so it can be a little to hard to feel exactly what the wing is doing, especially compared to the hybrid 2/3 liners. At three-quarter bar I was happy enough to stay on the bar through moving air as I flew along lines of convergence. The wing remained planted with no big pitch movements, and with the lighter bar pressure I could ease off if needed before smoothly reapplying pressure.

The glider doesn’t feel particularly driven forward but in reality it doesn’t get knocked back by turbulence and floats up lifty lines well. I flew alongside some other EN-Cs such as the Delta 4 and the wing kept up well. 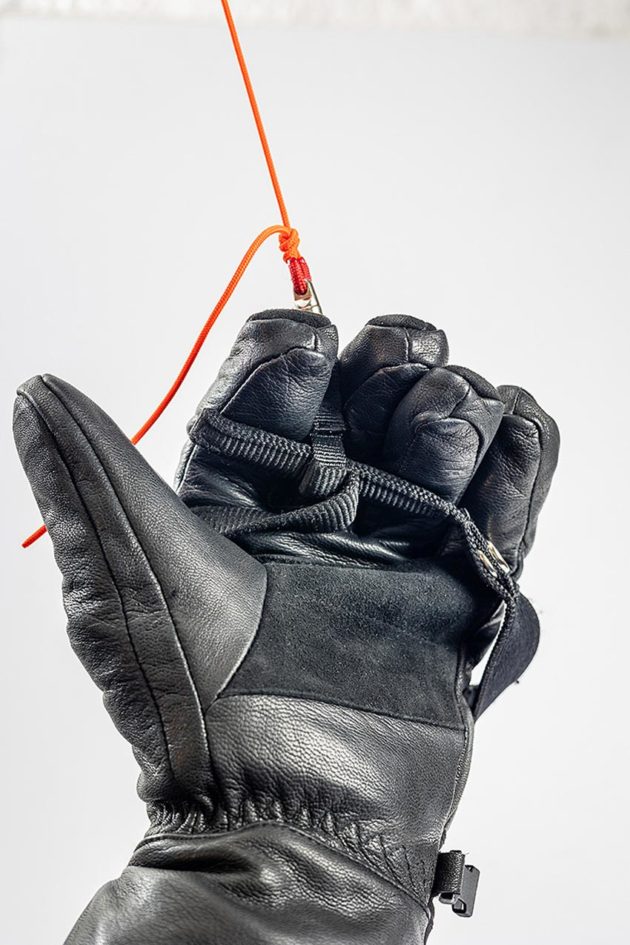 With only two main lines on each side big-ears are just that: big. I did find being so big they flapped around quite a lot. Once released they bang out quickly without fuss. I got into the habit of just pulling in on one side as this is a more stable configuration and still gives a reasonable sink rate. Stefan advised, “If you pull down the outer-A very slowly it is better, but generally with only two main lines it is difficult to pull different sized ears.”

I pulled a few 50% collapses over our valley and it was easy to maintain course, but the re-inflations could be a bit dynamic: it really wants to go back to normal flight. Spiral dives are easy to control and on rapid exit the pitch was easily controllable.

On landing the long brake range is useful – you can really slow this wing down. This is an important characteristic for a wing designed for vol-bivouac adventures. With the ramp-up in brake pressure, if you go deep it is easy to find the right position for a slow and steep approach without the risk of the wing dropping back unintentionally. For more conventional approaches you can bleed off the energy smoothly and have enough left for the flare.

Skyman are pitching the CrossAlps 2 as “one of the most powerful and honest gliders in the C class.” Only wingtip-to-wingtip testing would show exactly where it sits amongst its peers performance wise, but in day-to-day flying it certainly seems to be up there in terms of glide in moving air.

It’s a shame that Skyman didn’t fit any B/C control. Even though it is comfortable and solid on bar the missing tech will cause some pilots to pass over what is a very versatile wing. The massive weight range of the medium size gives room to fly with heavier kit for your vol-biv adventures, without compromising certification. Then, when you switch to your everyday kit the glider has a great climb-rate and maintains its good agility and stability in flight.