The first Rush appeared in 2004, and we now have the fifth incarnation of this popular high EN-B wing. The glider has always been synonymous with top performance in the class, while at the same time retaining a good level of safety with a relatively low aspect-ratio. The new model comes more than three years after the previous one. 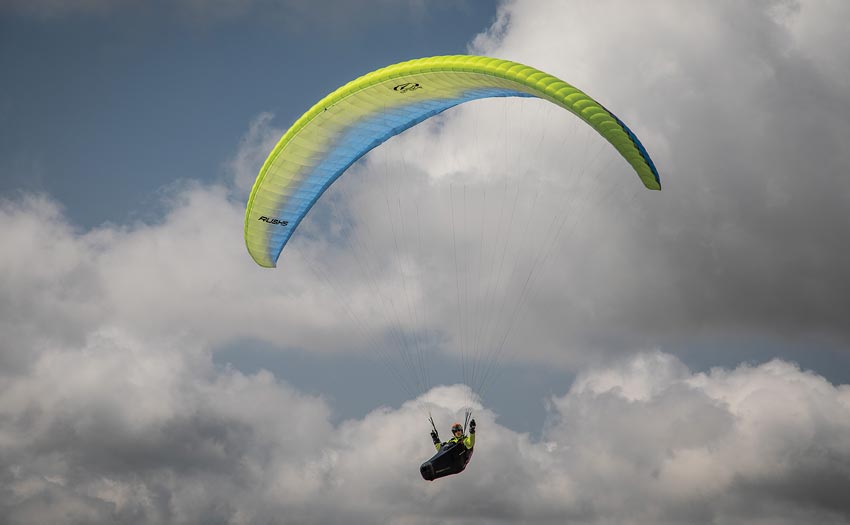 The Rush 5 is the little brother of the Delta 3. Pilots used to the Rush 4 will be at home on the new wing. Aspect ratio has stayed the same at 5.55, but there are differences in the design technology that boost performance. Improved 3D shaping in the leading edge creates what Ozone call a refined sharknose. Photo: Charlie King

A quick look at the specs and you could come to the conclusion that very little has changed between the Rush 4 and 5. The aspect ratio stays the same at a relatively conservative 5.55: this is slightly higher than the Nova Mentor 5 at 5.4; but lower than the Skywalk Chili 4 at 5.65; the Advance Iota 2 at 5.6; and the Niviuk Ikuma at 5.7. It also has the same area and number of cells as its predecessor.

The differences are in the design technology. The new model brings improved 3D shaping in the leading edge with three seams that control the level of creasing in this vital area of the profile. The wing features what Ozone call a refined sharknose; this looks quite subtle compared to the aggressively shaped inlets some manufacturers use. Ozone also say they have worked on the design of the internal structure to increase the solidity of the wing. 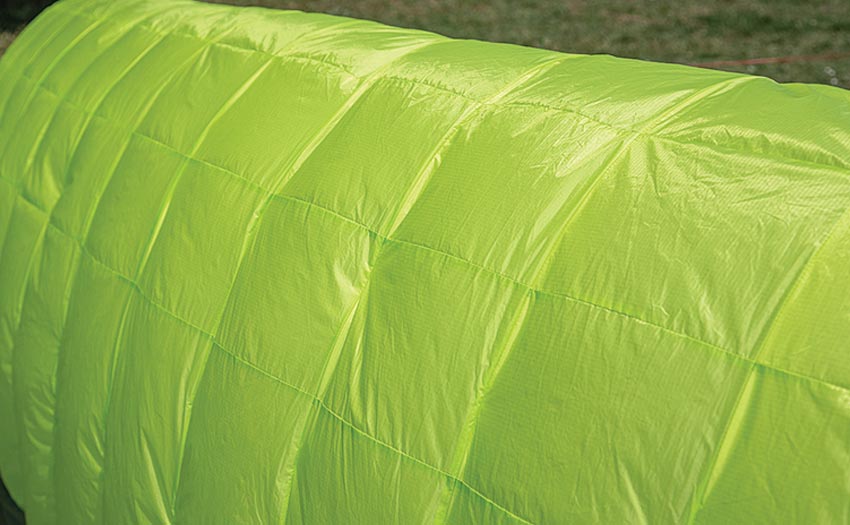 Three seams on the top of the leading edge: there to create a smooth profile and enhance performance

The cloth that Ozone used, Dominico 30D MF, feels quite heavy compared with other wings that I have flown recently. With more manufacturers using light materials on their standard wings, the Rush 5 feels pretty hefty: the ML I flew weighs 5.5kg, although this is 200g lighter than the previous model.

Like the Rush 4 the Rush 5 uses optimised lines with different diameters used across the span. Ozone have further optimised the lineset and this, plus the improved wing design, are said to further reduce drag.

If you have flown an Ozone wing recently the risers will be familiar. They are made from close narrow webbing and are sporty if understated. The brakes are held in place with a popper and use a pulley for the brake line. Some may bemoan the lack of rear-riser control loops but Russ Ogden said “we want simplicity, especially on an EN-B, and less chance of lines catching on things. It’s just as effective to grab the rear riser by the maillon.” 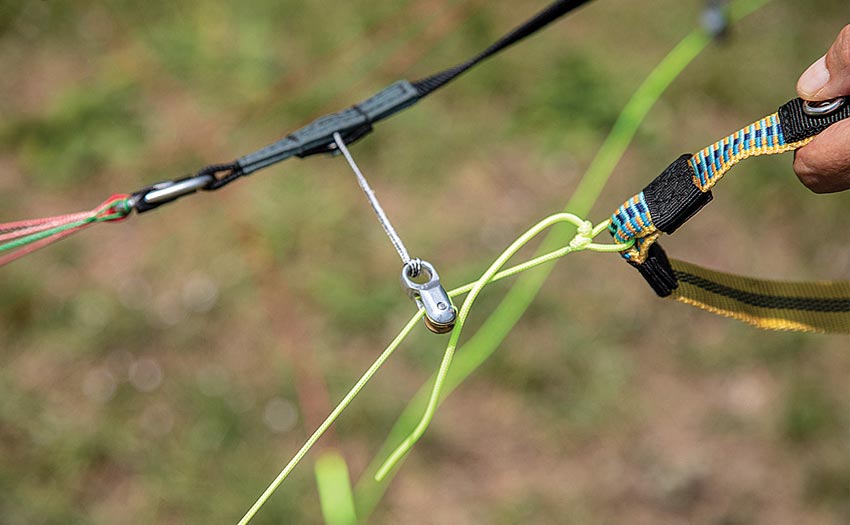 I don’t know if it is the heavy material but the wing feels quite slow to rise. Having said that there is no hard point that you have to pull it through, it keeps on rising albeit slowly. I did find using pressure on the lines above the maillons helped. A plus is it shows the same behaviour in stronger winds, rising steadily overhead with no tendency whatsoever to overshoot. 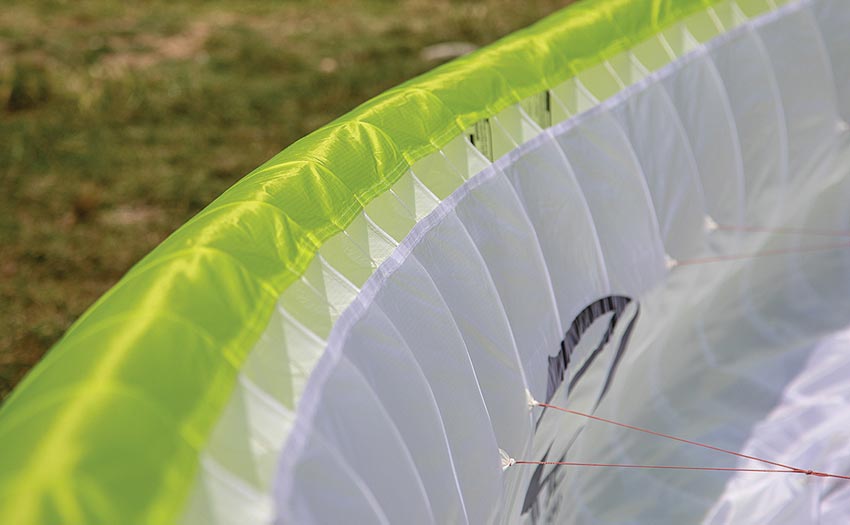 The refined sharknose with set-back As

Even as I was running down launch on my first flight with the wing I could feel the solidity of the Rush 5. The wing is very cohesive and moves as a single block, very different from Ozone wings of old that flexed far more. It gives a very comfortable ride, cutting through turbulence with no obvious pitching or yawing and takes very little control to keep it on heading; it’s like a warm knife cutting through butter.

Most of my time spent with the wing seemed to consist of unseasonal conditions with lots of stability low down and quite a lot of wind. This lead to many pilots commenting on launch about how they were bounced around. The Rush 5 though kept serene at all times and seemed to cushion me from bumps. It does this without losing feel, there is a lot of information. It is a bit subtler than wings such as the Skywalk Cumeo, and it took a couple of flights for me to feel like I was getting the most out of thermals.

Entering thermals, even strong ones, there is absolutely no pitching back and only a subtle pitch forward to bite into it. It is very impressive how Ozone have managed to find this balance in behaviour. Even in strong convergence climbs the wing felt smooth, calm and efficient.

When you first pull the brakes to turn the wing will roll over nicely. More pulling won’t increase the roll so much but will get it turning quickly in yaw. The wing isn’t prone to diving in the turns, keeping everything efficient. However, if you go deeper in the brakes and add weightshift you can bank it up and hook it round.

The wing has a good level of agility allowing you to hook it into small thermals low down. It is also very good in weaker stuff, where it feels like it climbs up through the bubbles of stronger lift. 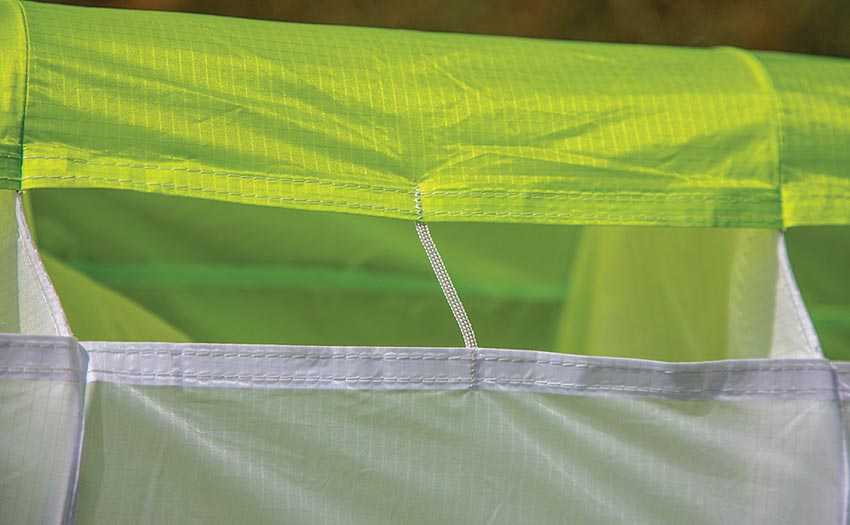 Tape in the centre of the cells increases tension at full speed; Mylar shapers on cell walls

That quiet efficiency is evident on glide as well. I measured trim speed at 37km/h, the same as the Cumeo, the last high EN-B I flew. Pulley-to-pulley I measured a top speed of 48km/h, this was at an all-up weight of 102kg with my Impress harness in smooth morning air. These speeds are measured using a calibrated Flymaster TAS Probe and are in keeping with other wings of the class.

What is remarkable is the lack of movement of the wing when gliding along. Again, in active air it cuts through the bumps and surfs up the lift. It feels very much like the Delta 3 in this respect, maybe a little less driven, but it pushes forward nicely. If you are used to higher-class wings you will recognise this performance, especially when pushing into wind.

On bar the leading edge feels very solid. Even flat-out the wing retains its calm composure and there is no noticeable increase in sink. I suspect Ozone didn’t push the top speed, preferring to keep the wing safe and secure. The result is completely usable performance: I was on at least half-bar for all my transitions even when flying through turbulent convergence areas; this really is a wing that will take you places.

Big ears are easy to pull and work well with no thrashing. Combined with the speedbar they provide a good descent rate with forward speed, useful for escaping cloud suck. When released they unroll on their own, although a quick pump can speed this up.

Playing with wingovers and spirals the wing feels very controlled and has no surprises. It retains a good amount of energy so it is easy to build up nice wingovers. In spirals it drops in smoothly. With such an efficient wing it is of course necessary to bleed off the energy on exit or you will find yourself climbing. Even then there is no massive surge, it all feels nicely controlled.

The brakes have a long range giving good control at low speed for landing. It continues the general theme of ease of use. 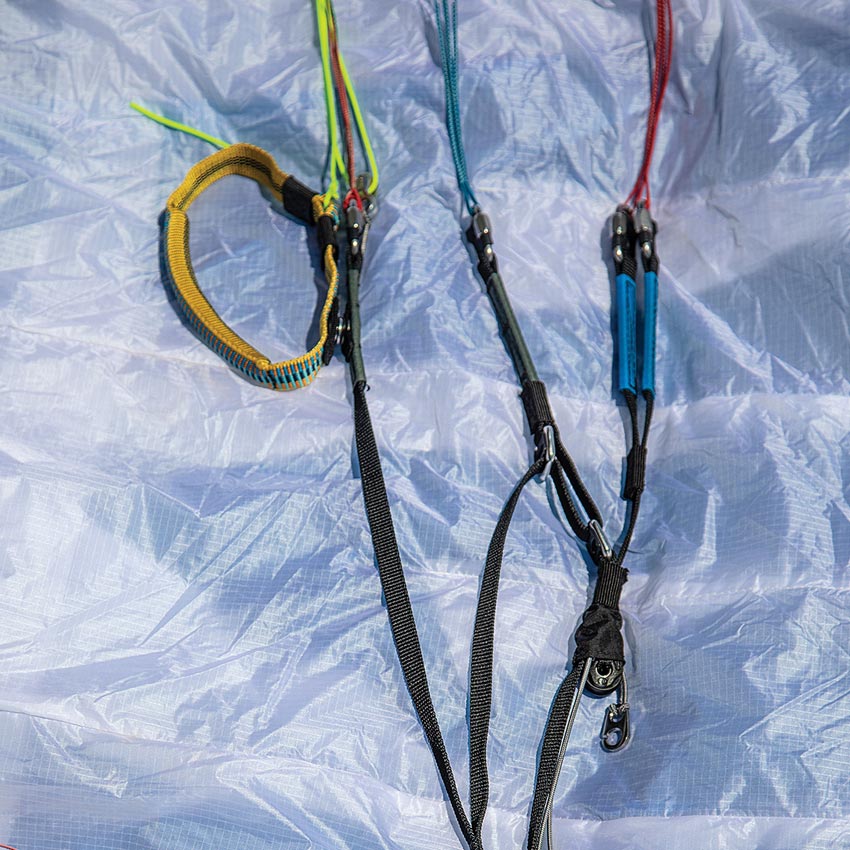 The Rush 5 is a remarkable wing in that it combines a very comfortable secure feel with top-class performance. It doesn’t feel very demanding to fly, even in the choppy conditions I “enjoyed” during the review period.

Its ability to serenely cut through the turbulence and enter thermals without much input will keep the stress levels low. That, combined with good performance and efficiency when pushing on bar, makes for a great cross-country wing for those upgrading from mid-Bs and those who are moving down from higher-class wings. It’s a wing that is hard to fault, a finished product as you would expect from a quality brand.

Marcus King interviewed Russell Ogden about the design process behind the Rush 5. Read that interview here.

Marcus King regularly reviews EN-B and EN-C wings. Cross Country’s designer, he has been flying paragliders for 25 years. He lives in the south of France near the sites of Gréolières and Gourdon. He flew the Rush 5 with an Advance Impress 3 at 102kg.