The updated design has an inflatable leading edge with cells at the wingtips. A lot of care has gone into shaping the top surface to make it clean Photo: Charlie King
Reviews

It was a beautiful spring morning in the south of France and we headed up the hill for a hike-and-fly. My bag weighed a little less than normal as I had the new Niviuk Skin 3 P, which weighs less than 2kg.

Inspired by the weather and the lightness of my pack I suggested we try a new route to the top, secure in the knowledge our bags wouldn’t weigh us down. So we headed off the beaten track and followed a faint path as it zig-zagged through scrub up to the base of the cliffs that dominate the view from the village of Gréolières.

Here we found a shallow cave, partially walled in, presumably for livestock. From there we followed a path that shadowed the rising base of the cliffs. At times the going got steep and the walking poles were put away so we could use hands and feet. Climbing higher the views got more impressive, with the golden limestone cliffs framing the view down to the valley below.

Coming over a rise we found ourselves in front of a cave and an impressive arch, from where it looked like we could scramble up the side to where I knew a path traversed the cliffs above to our normal take-off. We ascended a series of airy ledges and were soon walking along the top, a good breeze coming up the front, and our thoughts turned to flying. 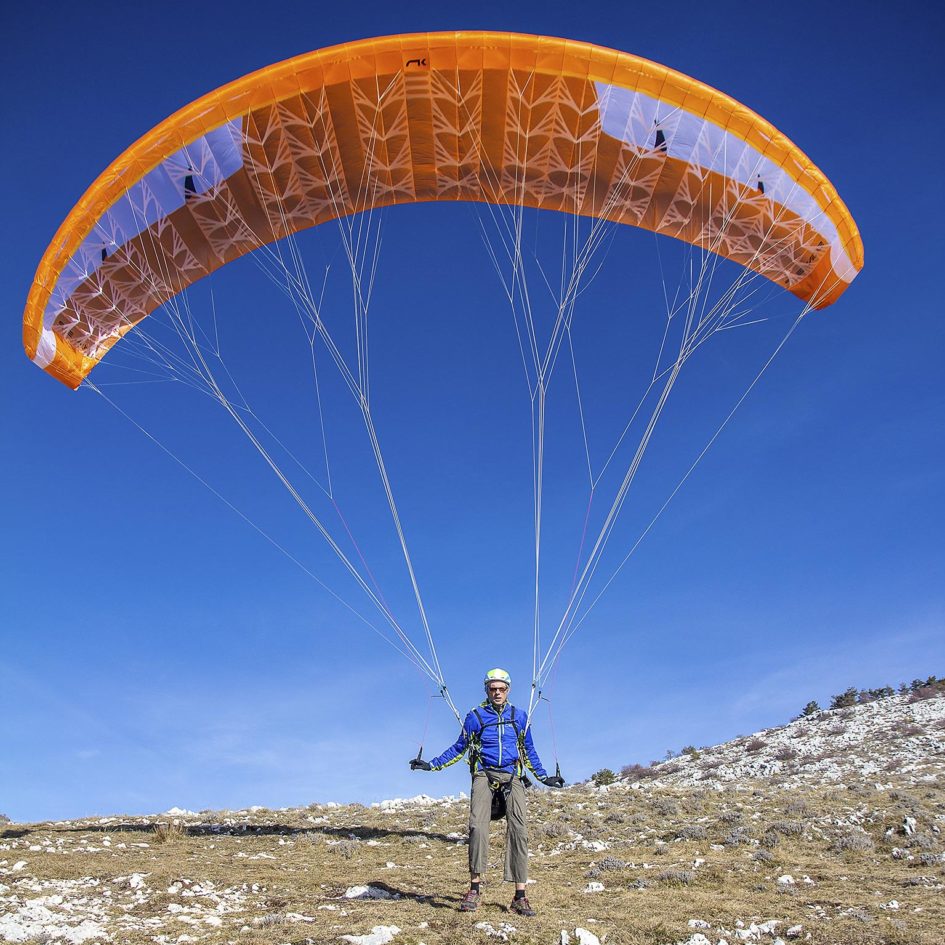 The Skin is super easy to launch

On launch I pulled the wing out of its compression bag. A clever fold-over valve allows you to remove all the air from the packed bag before putting it into your rucksack.

Kit stowed and clipped in it was time for me to go. The perfect breeze meant the wing was keen to get in the air, as was I. The glider is easy enough to keep on the ground and when ready to go a bit of weight on the As is enough to ease it into the air. It rose quickly but needed little input to stop it above my head. A few steps forward and I was lifted into the sky.

In the air it is obvious that the new Skin is a lot more stable with a more secure feeling than the previous models. Especially in thermic air I found the workload on the original Skin a bit overwhelming, but on the new one it’s all a lot calmer, more normal. There is still quite a bit of information, but it is information rather than noise and you can make use of it to work the lift.

Another thing that was immediately obvious was the direct reaction of the brakes. It makes putting the wing where you want it a breeze. As I surfed along the cliffs using the warm air rising up them it meant I could get in close, confident of putting the wing just where I wanted it. 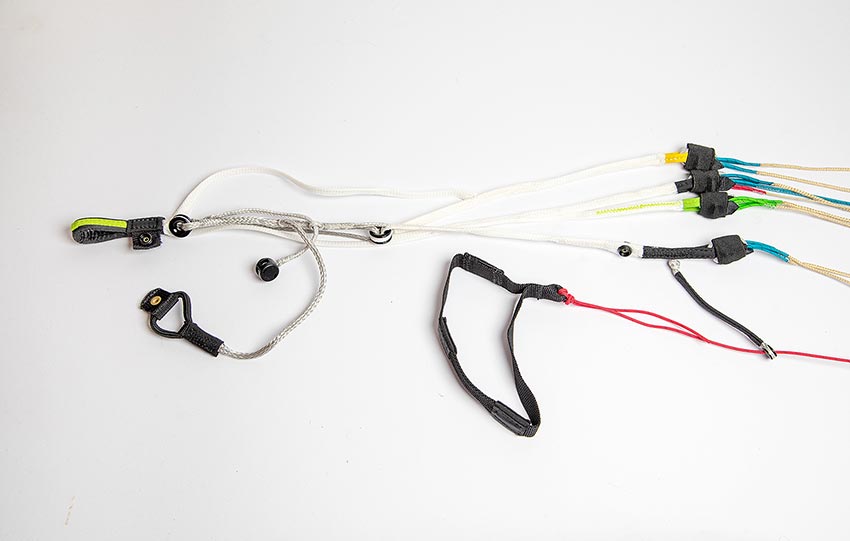 Bootlace risers on the Plume version have no speed system but do have trimners,

Although precise the brakes still have a good amount of travel so are tolerant of heavy hands. The wing has a real feeling of immediacy, keeping you in control, but the forgiving travel means you won’t be wobbling about all over the place if you are heavy on the brakes. The glider also feels less roll unstable than previous models; that’s not to say you can’t get it to flick over with an application of brake and weightshift, it is just more controlled. That’s probably a result of a bit more material in the diagonal ribs resisting lateral movement.

As the morning warmed up it was obvious that the day was going to be a good one. The first thermals started to ping out of the sunny corners. Entering one the wing felt nice and solid with no pitching back. The brake control allowed me to turn tightly and efficiently and soon I was climbing into the sky on my invisible elevator. I was beaming from ear to ear, our micro-adventure was truly immersive. 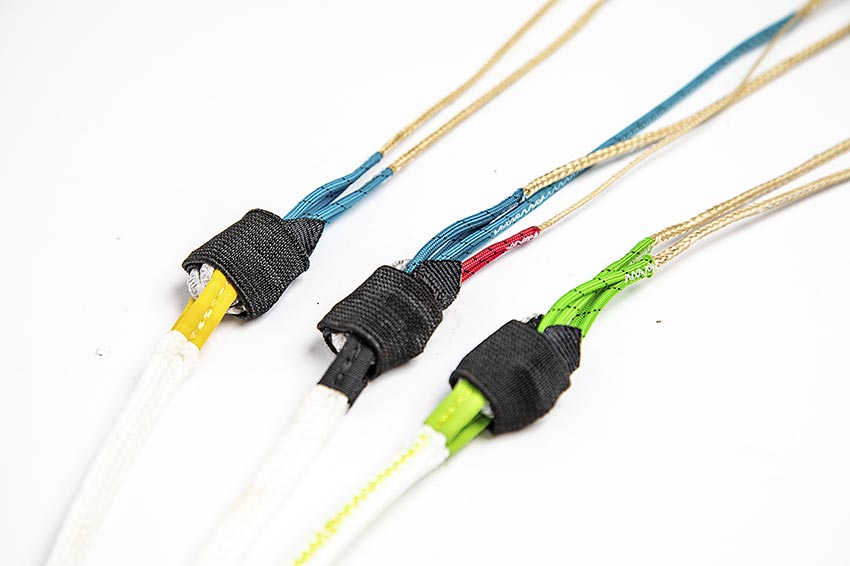 The day got stronger and soon the climbs were over 3m/s, but still the wing felt comfortable as we danced below the airspace limits.

Of course, with thermals comes the corresponding sink and here the wing showed a marked improvement over earlier iterations, which were frankly poor at penetrating into wind through sink. With the new Skin 3 P I was able to push forwards much more easily along the ridge to the next climb.

It was time to head home so with all the height we had we set off on glide across the valley. At trim I was just a fraction slower than the Ultralight I was flying alongside, so that’s about 37km/h. Glide angle was also very close; maybe the Ultralight rides the bumps just that bit more efficiently, but it’s a matter of metres over a kilometre. Letting off the trimmers, which worked more easily than I had thought, gave me an increase in speed of about 5km/h.

Playing with the ears, they came in easily enough and there was no real thrashing. They seemed reasonably effective. With its EN-B rating I was confident enough to try a couple of collapses up high. It took quite a bit of force to pull down the As. Collapses are normal: it turns and dives smoothly in a controlled way and, if you let it, the collapse will just roll straight out. Holding the collapse in I was able to maintain direction just by leaning away from the collapse. 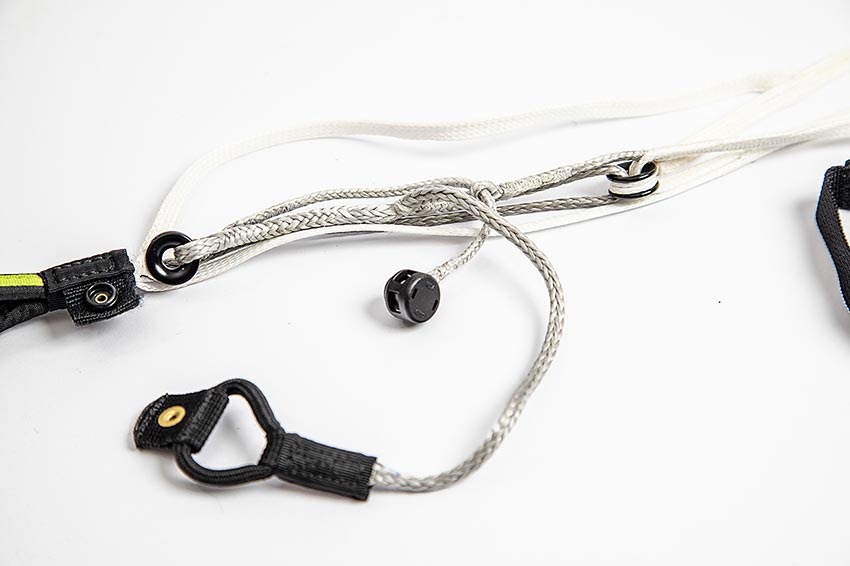 With coffee beckoning it was time to see the playful side of the wing. I have to say I really loved the way you can flick it over with the brakes and a bit of weightshift. Wingovers are fun and you can easily get above the wing, but that stability in roll makes pulling out quick and easy. It’s the same story with spirals: kick it in and round it goes, but it’s nicely controllable and when you come out the pitch is easily handled. This wing has really nice pitch behaviour.

There was some wind in the landing field as I made my final approach, so a bit of speed then a good flare and I made a normal landing. Wow! What a start to the day. Who needs to travel for adventure when you can find micro-adventures outside your back door with the help of marvels of modern technology like the Skin 3 P?

Over the next couple of weeks I got to take the wing on more hike-and-fly trips in varying conditions and I enjoyed the wing more and more. On launch I found it to be super easy and efficient.

One day with a less than optimum forecast, I arrived at launch to find a backwind. It wasn’t so strong so I decided if I could get off it would be fine. Waiting for a lull I started my run, the wing came up quickly and smoothly as normal and I was off into the sky. It was the same on early morning nil-wind days: it never failed to launch.

In the landing field the wing coped with downslope winds and nil-wind landing equally well. If you give it some speed, as you would any wing, there is a good flare that will have you touching down on your feet. I don’t recall having to run out any landings. 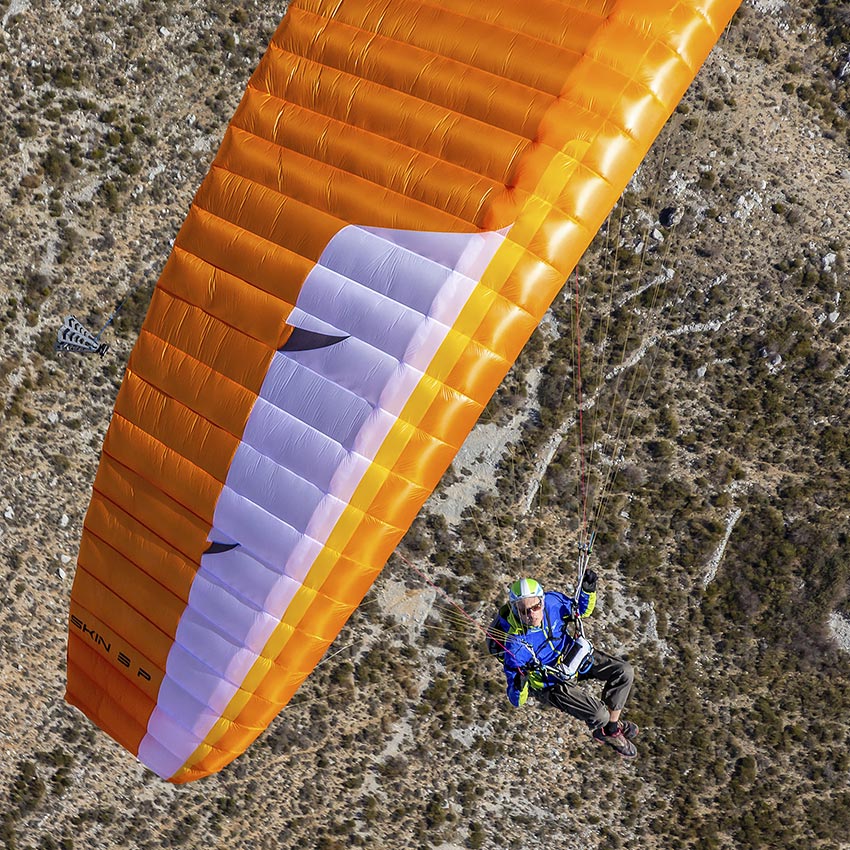 Top surface with 3D shaping on the leading edge

With the latest version of the Skin, Niviuk have undoubtedly crafted a wing that is very close to double-surface mountain wings in terms of usability, safety, comfort and performance. It also brings to the mix some of the unique aspects of single-surface wings, such as launch behaviour, roll stability and compactness.

Certainly it’s a wing that other single-skins will be measured against, if not all mountain and travel wings. If you have one it is sure to open up more adventures. Weighing just 1.8kg you can go for a walk or climb in the hope of flying, or simply tuck it into your luggage on the off-chance of getting a flight in. If you have it you will use it, after all.

Niviuk say: “Light, simple to fly and much more fun. Take your hike & fly challenges to a more extreme level with the guaranteed comfort and safety of an EN B certified wing.”

Marcus King flew the Niviuk Skin 3 P 18 with a Roamer 2 harness and front-mounted reserve at the all-up weight of about 86kg in varying conditions in the south of France from nil-wind to spring thermals. The review flying was carried out before the coronavirus lockdown in France.

This review was published in Cross Country issue 210 (June 2020)