The Hyper is for cross-country pilots who don’t need full competition functions. Marcus King tries it out

Naviter have been around for 18 years. Their stated aim is to “enable pilot excellence”.

Originally specialising in instruments and software for sailplane pilots, they moved into the free-flight world six years ago with the Oudie.

The Oudie is supported by SeeYou flight-planning and analysis software, available as an online product as well as a desktop application. The Oudie is the company’s flagship model and is a full-spec flying computer popular with competition heads and XC pilots. In 2016 Naviter acquired Flytec, instantly giving them a broad range of instruments.

The Hyper is Naviter’s latest release and is billed as “a standalone instrument for everyday use, hike and fly adventures and cross-country missions.”

First impression is that the Hyper is a pretty small unit; smaller than some modern mobile phones. It’s just over 10cm tall with a width of 7cm. At only 135g it feels very light.

The front is dominated by the 3.5-inch touchscreen, which is slightly recessed to help protect it from scrapes. There is quite a big bezel top and bottom, no Apple-style shaving-off every last millimetre here. The top one houses two indicator LEDs and the logo. At the bottom you will find four buttons. These can have various functions depending on where you are in the system. They are easy to push with gloves as they stand proud of the unit and have an obvious click.

Inside the box is a leash and a silicone jacket, with Velcro patch. There is an optional riser mount for hike-and-fly adventures, as well as two different leg mounts. 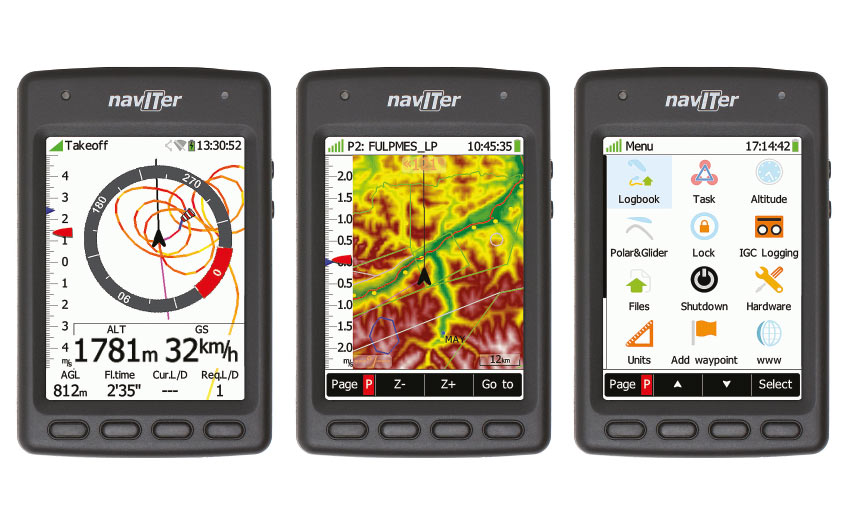 Is a full-colour touchscreen. It is nice and bright and easy to read, even in sunshine. For the techies it uses transflective technology, which keeps the contrast constant. There are four basic screens that you can move between, either by swiping left and right or using the page button; I found the latter easiest.

On the left side of all the flying screens is an analogue vario display, giving current and average lift. This is shown by pointers that move fluidly.

The first screen is a compass giving you obviously your direction of travel, as well as wind speed and direction, next-waypoint and last thermal. Along the bottom are four information boxes that you can fill by choosing easily from a list.

The screen also shows a thermal assistant. This shows a zoomed-in track with lift indicated by the colour of the track.

There are two map screens, which each also have four info boxes. These can be set to different functions, giving you a total of 12 possible information boxes. The two map screens can also have different zoom levels. The maps can be either north-up or track-up and can display airspace or topography including roads and rivers. The map screens can also be set to show the task, an FAI-Triangle assistant and OLC optimisations, something I have found useful when flying unplanned routes.

Naviter say the battery will last around 12 hours. The instrument gives good feedback of the battery usage and gives a predicted-life left. Battery-save mode gives up to 36 hours of logging and audio-only vario.

Compared with many of the latest instruments the options when it comes to the audio side of the vario are pretty basic. You can choose the speed of the filter, lift and sink thresholds and that’s it. For the display you can also specify the range and averager (they call it integrator) time.

So it’s not a vario for those that like to tinker with all the settings, but if you want one the works straight out of the box it’s great. In the late summer / autumn conditions I flew with it in, I found it nicely sensitive without being fear-inducing when things got strong; some vario sounds can put you on edge in the strong stuff.

In fact there is something quite relaxing about the beeps of the Hyper. I also managed to have the audio of both the Hyper and my Flymaster Live with instant vario switched on during one flight and didn’t find they conflicted. It would be nice though if Naviter implemented some sort of buzzer for when you are in non-sinking air, like several other devices. Another feature that is missing is auto-silent before take-off. Naviter say this will be in the next release of the firmware. 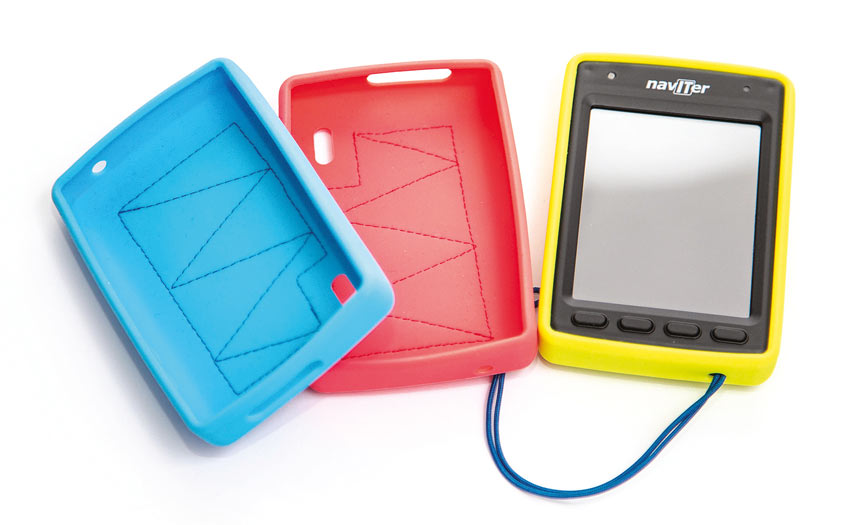 Various coloured silicon jackets are available for the Hyper

The Hyper has enough navigation features to keep most happy. You can upload tasks and waypoints simply by plugging it into your computer: it acts just like a USB drive so you can copy your files over to the appropriate folder. From the settings you can choose which task and waypoint files are active.

Setting up a task is easy thanks to the graphical nature of the system. It’s also easy to edit the task if you make a mistake, adding in or deleting a turnpoint or changing the settings for a particular turnpoint.

Competition options are pretty limited: you can set up a simple speed section with exit or entry starts, but you won’t find multiple start-gates or goal-close deadlines, or more esoteric things such as conical end of speed sections. That is all firmly in Oudie territory. However, the functions on offer should be more than enough for your first competitions or occasional use.

One thing I would have liked to see is task overview, so you can easily check you have input the details correctly, with a nice map of the task. You can of course see the task on the map pages.

When you are flying you can simply go to take-off, the last thermal, the current task point or any waypoint by hitting the right-hand button and selecting your target. I found this very simple to use in the air, making it easy to change a planned route and skip a waypoint.

Once you have finished your flight the Hyper will save an IGC file. You can copy these off the machine by connecting to your computer. As an alternative you can connect to a Wi-Fi network and email the IGC file directly from the Hyper. This is an easy way to get your IGC files without the need to find cables. Naviter told me in the future it will be possible to upload to XC servers and the SeeYou Cloud.

Talk to any vario manufacturer and they will tell you that most pilots don’t update the software on their instrument. Naviter have made the process very simple: just download the file, copy it to the instrument, then restart. Hopefully this can be further simplified by using Wi-Fi.

Like many flight instruments now, the Hyper is a constantly evolving instrument – several new features were added during the test period – so it is well worth keeping it up to date.

Naviter also promote the Hyper as an instrument particularly suited to hike-and-fly. Its unique combination of small size and clear graphical display certainly make it a good choice for adventures where weight matters, although in the software the only specific function is the ability to turn the logger on for hiking. With the great screen it would be really useful if you could upload GPX files and navigate with them, but this would require quite detailed maps instead of the supplied maps that cover a whole continent.

The Hyper comes complete with pre-loaded airspace files for the whole world. You just need to activate the file for the region you are flying in. Once activated it displays the airspace on the map views.

Unlike other instruments you can’t find details by clicking on the airspace, which could make navigating complex airspace more difficult. However, the Hyper can give you a warning (light, sound and display) when you are in danger of infringing airspace. The warnings are displayed at the top of the screen so they don’t get in the way of the other information (some other vario manufacturers could take note of this).

When flying under airspace I found the system gave plenty of warning without being distracting. The great thing is it is all very easy to use, even for beginner XC pilots.

The Hyper is a great little unit, which works straight out of the box. It will do everything most pilots will ever want. More importantly, it is very easy to use in the air. Despite its size the screen is easy to read, even in bright sunlight.

The combination of buttons and touchscreen work particularly well. It’s really an instrument that will accompany you through your flying career from soaring, using just the basic compass screen, to competition tasks. It will be interesting to see what extra functions Naviter bring to the device in future updates.