The distinctive top surface of the Eden 7: the canopy looks racy, with an aspect ratio of 6.06 and 59 cells. Photo: Charlie King
Reviews

It’s hard to believe that the Eden is in its seventh incarnation. The Eden has been a popular wing in Mac Para’s range since the early days, with the first Eden released back in 1998. The latest version was unveiled at the Kössen testival in July last year, but it wasn’t until this winter that we got our hands on a review wing.

The new Eden has three more cells than its predecessor, now with a total of 59. Most of the cells sport a rigifoil with Mylar reinforcements sewn into the profile. This, along with the double 3D-shaping, gives the nose a very clean look. Also helping with this is the new negative 3D-shaping seam, just above the cell openings.

Normally, 3D shaping works by adding a little material to stop creases forming when the material balloons under pressure. With negative 3D-shaping a little material is removed: this increases the spanwise tension across the cell. It is used to reduce the dimples that can occur at speed on the leading edge.

Designers can of course add tension across the leading edge by making the tips pull outwards but this increases induced drag. 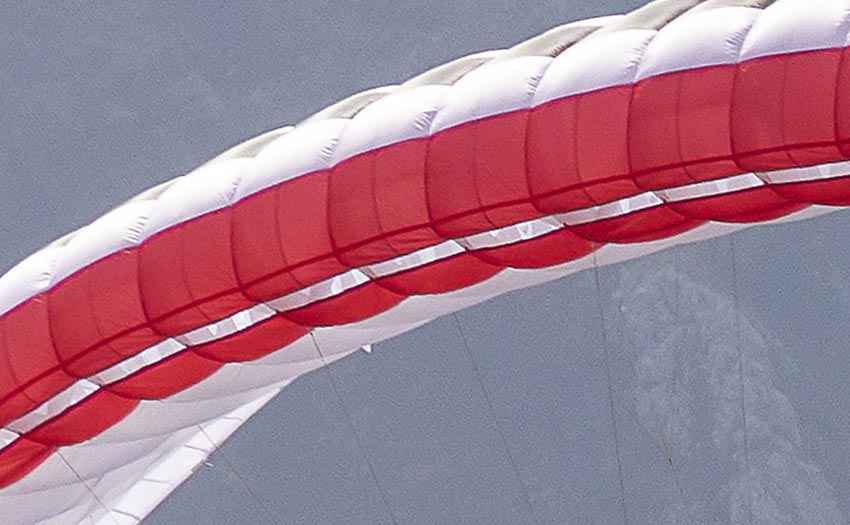 The cell entries meanhwhile make obvious use of sharknose technology.

Compared with the Eden 6, aspect ratio has seen a small increase from 5.91 to 6.06. The wing certainly looks racy when it is over your head. Designer and company owner Petr Recek told me: “Even though the canopy has a higher AR, we have managed to develop a glider where the pilot feels relaxed.”

He added: “To achieve this we used a combination of different profiles, tensions and ballooning. We also added extra internal straps to stabilise the wing across the span.” Look inside a cell and the complexity of the internal structure is obvious.

Also supporting the load are thin nylon rods sewn into the seam across the chord around the C/D-tabs. Interestingly the wingtips aren’t pulled in like the previous models but have a small upward curve, obvious in the photos.

At the back the wing has mini-ribs to clean up the trailing edge. As Petr said, “It may sound like a well-known and well-played song, but the theory speaks an obvious language. A clean leading and trailing edge are responsible for a profile’s performance.

“Although it is more costly and time consuming to produce, the details like rigifoils in the centre of leading edge panels together with 3D shaping and mini-ribs help to increase the performance.”

The wing is a made from a mix of Skytex 32 and 38 with the more durable material on the leading edge. Despite all the technology the wing weighs in at just 4.75kg for the 26 size I was flying. This compares with 5.47kg for a similar-sized Ozone Rush 5 and 4.85kg for the slightly smaller (25m2) Advance Iota 2. The Eden 7 is available in six sizes covering weight ranges from 55kg to a massive 145kg and in three standard colour schemes. 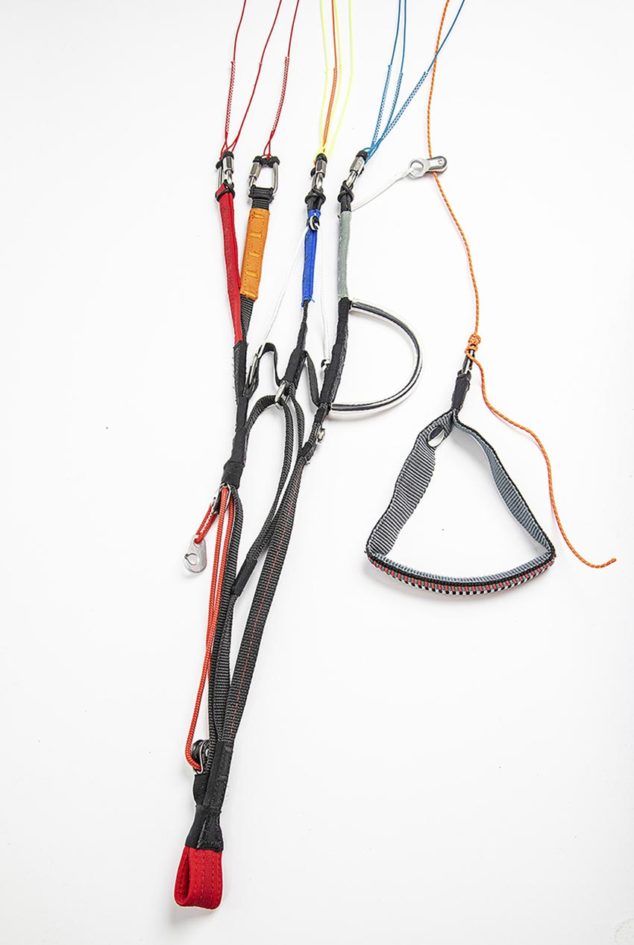 The riser system, with colour-coded risers and
BC riser-steering system

Where the Eden 6 was a pure three-liner the Eden 7 adds additional D-tabs in the centre of the wing to better support this area. The lines are a mix of unsheathed lines higher up with the main lines sheathed and colour coordinated for easy handling. I found no real issues with the mix of lines on launch.

The brake handles attach via poppers and have swivels to reduce line twist.

The risers themselves are made from thin webbing and have a technical look. On the rear riser you will find control handles that connect via straps and pullies to affect both the C and B risers. A system used to make the wing more efficient when using rear-riser control, it acts in the opposite way to applying the speedbar. This allows you to pull the wing back toward trim speed while fully on the bar, but without adding curve to the profile that could make it unstable.

With systems like these we are getting much closer to proper rear-riser control on three-line setups.

Launching and in the air

Both forward and reverse launches are super easy with this wing. It inflates easily and rises steadily to come to a stop overhead with very little input needed. Despite the relatively high aspect ratio it doesn’t snake about or flex much. It’s all very relaxed, as you would hope from this class of wing.

On my first flight I took off, turned left and almost immediately found a thermal. From the moment I hooked into it the handling of this wing put a smile on my face. The brakes have a nice direct feel, with relatively short travel needed to be effective.

A bit of weightshift helps it go round tightly, but there are no sticking points: it just turns smoothly. The wing doesn’t seem to get pitched back at all, instead it pushes forward nicely into the lift finding the best bits. I really like the feel it gives you – the wing behaves as a solid block giving a reassuring feel but I could tell what was going on at the tips clearly. It really feels like the tips become an extension of your hands, feeling the air. Listening to this information enabled me to find the best parts of the lift. It’s the sort of feel that helps you grow as a pilot when moving up the classes.

I was flying a size 26, which goes up to an all-up weight of 103kg at about 99kg with my Woody Valley GTO Light harness and the usual winter clothes and camera. At this weight the wing seems to have a good climb rate in thermals.

On several occasions I was able to climb out when others remained stuck on the lower ridge at our home site. It also coped well with small cores where you had to keep circling in and out of the lift. With no real pitching it stays efficient so you can work the small bubbles.

This is a wing that likes to fly fast. Thermalling is best done near trim speed with as little brake input as possible. Petr told me: “The wing flies well with little brake. Once the pilot believes in the glider’s stability they will realise that just weightshifting with a small amount of inner brake is needed.” 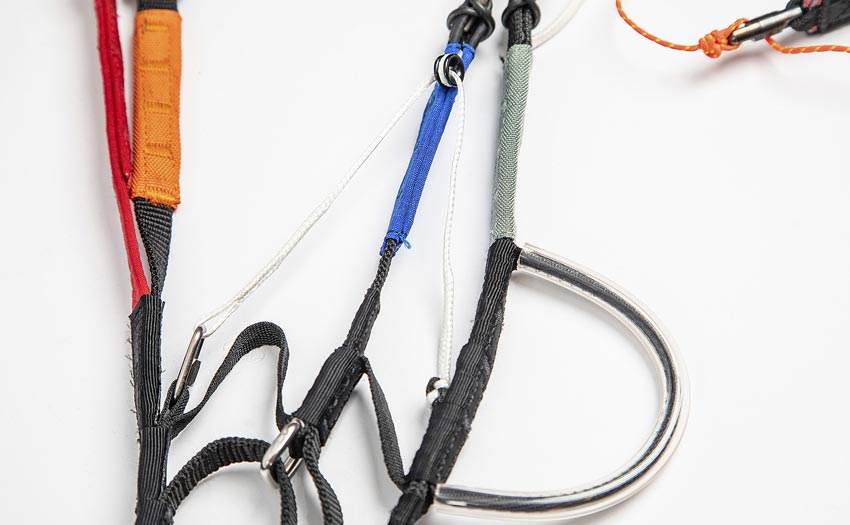 The B/C riser-steering system gives you a lot of control. The loops encourage you to pull the riser down and back in the correct way

The speed bar has quite a lot of pressure when you push it but the wing remains efficient throughout the range. I measured the trim speed at 37km/h with our Flymaster TAS probe with a top speed of about 52km/h. Importantly the wing still feels nice and solid at that speed, with little movement of the wing. In fact for me it felt like the wing became tauter as speed was applied; you can almost feel it creak as it tensions up.

The C-controls, that act on both Cs and Bs, are a little heavy for the initial pull but then easier to use and they are effective. I used them mainly for steering on bar or to slow up a bit in the lift rather than catching the wing, as it doesn’t really pitch about.

However, the B/C system really gives you a lot of control. From flat out I could pull the speed back to trim speed using the rear risers. It’s possible to slow it right up in the lifty bits and even 360 without coming off the bar. You can of course also use it to turn when at trim as well. The loops of the rear-riser control encourage you to correctly pull the riser down and back (if you just hold the C and pull down you will deform the profile).

On glide you can just let the Eden feel its way through the lifting air on bar. I glided along our local ridge a few times in an area of convergence that can often be reasonably turbulent and always felt comfortable cruising along on bar. 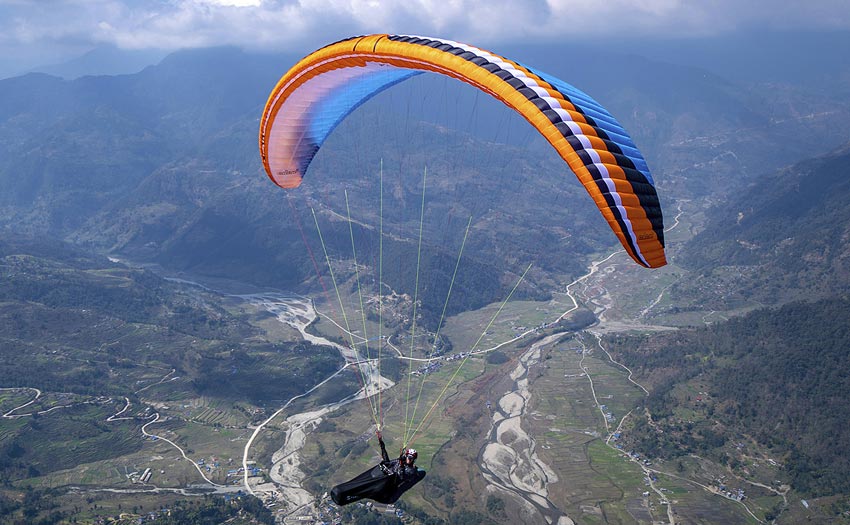 The wing has a very reassuring feel and doesn’t move about much. That, combined with its solidity makes for a safe feeling wing. In around 15 hours flying in thermic conditions I didn’t have anything other than the smallest wingtip flutter. That was despite climbs of 4m/s into a reasonably strong meteo wind coming over the back.

Big ears are easy to pull and are nice and stable without much flapping. One day with low cloud I made a lot of use of them to avoid being sucked in, and they always acted in the same predictable way.

Pulling asymmetric collapses there is a good amount of pressure on the As. Once pulled it was easy to maintain direction with some brake, and the descent rate was reasonable. It doesn’t feel like the wing has any nasty secrets lurking ready to bite and I was surprised how easy it was to pilot given the aspect ratio.

Wingovers are easy without any excessive energy – it’s all very smooth. The same applies for spirals that can be entered with a mix of weightshift and brake. Exits are equally smooth, with the handling letting you easily bleed off the energy. I used it a couple of times in anger to get down and it was all very user-friendly. Doing a rapid exit showed the good pitch behaviour as it was easy to ‘catch-the-cat’. 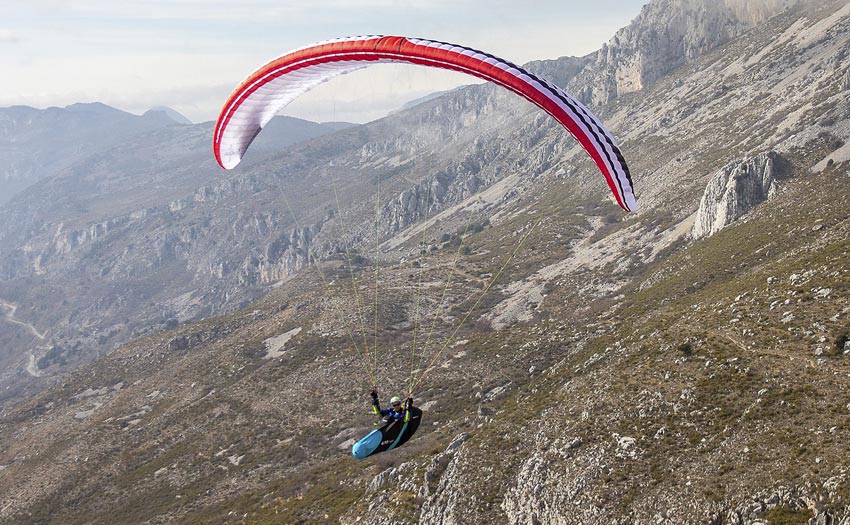 The glider scores well in all aspects: comfort, security, performance and feel. It’s a well-crafted glider, built with attention to detail and care. A great tool for cross-country flying
Photo: Charlie King

If you are in the market for a B+ wing the Eden should definitely be on your shortlist. The craftwork that has gone into the design has paid dividends in terms of both performance and feel. It’s a wing that has a good degree of comfort and security but at the same time retains good feel for what the air is doing, and good climbing and glider performance.

If you are a developing pilot that feel will allow you to learn and make the most of the lift. The B/C riser control is effective, and you can learn these skills with a system that works properly. This all adds up to a wing that will help you progress your flying as well as being a great tool for long cross-country flights.

Marcus reguarly reviews EN-B and EN-C wings. Cross Country’s designer, he has  been flying paragliders for 25 years. He lives in the south of France near the sites of Gréolières and Gourdon. He flew the Eden 7 (M) with a Woody Valley GTO Light at about 99kg.