Brian Steele flies the fifth generation of this classic EN-B wing, in the Alps

I have been lucky enough to fly some great new wings in the EN-B class. I really enjoyed the smooth and playful Epsilon 8 and Triple 7 Knight and noticed a step up in performance on the Iota 2 and BGD Punk. All impressed me in different ways and had clearly different piloting requirements within the class.

The trickle-down of technology from higher-class wings seems really evident on wings like the Iota and Punk, with narrow risers, C-handles, optimised line-sets and other features that mark them out as true performance B wings.

The Gradient Golden 5 to the untrained eye has not moved on when it comes to this arms race in EN-B. At first it looks familiar, with standard riser diameters and fully sheathed lines. However, subtle changes add up to a great improvement and a great all-round wing. 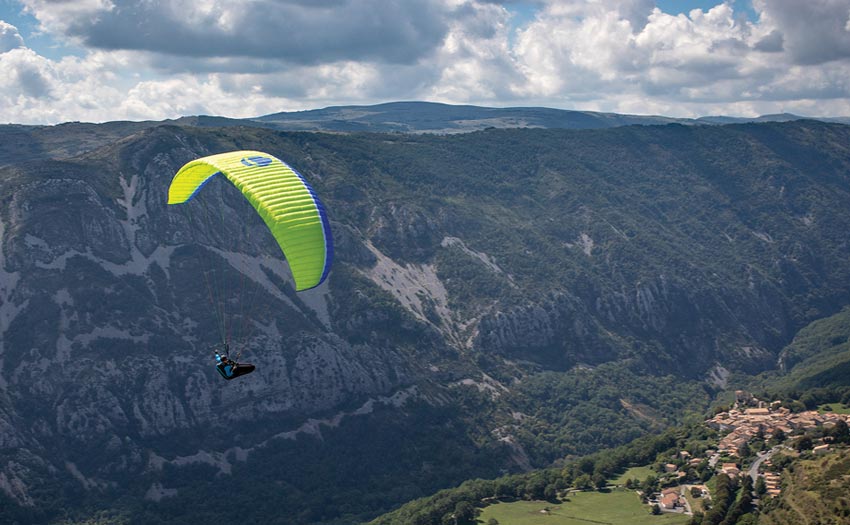 The glider is a three-line design, has an aspect ratio of 5.34 and 54 cells. It is designed as a ‘classic’ EN-B, and would suit newly qualified pilots with a few hours under their belts, to experienced occasional pilots who want ease of use and nice handling

The Golden has always been a low to middle EN-B. The Golden 5 sits between the Bright 5 (EN-A) and the Nevada 2 (high EN-B). A wing here has to retain the ease of inflation and groundhandling that a beginner can handle, while having enough performance to take a new pilot on their first XCs.

For a few years Gradient have used a mix of triangular and narrow cell openings on the leading edges of the Nevada and Aspen. Gradient call this the VO system: the V-shaped cells allow for easier inflation and re-inflation in low angle of attack situations while the narrower slits optimise internal pressure. The result is pilots should find launch easy and have a great feeling of solidity across the span. 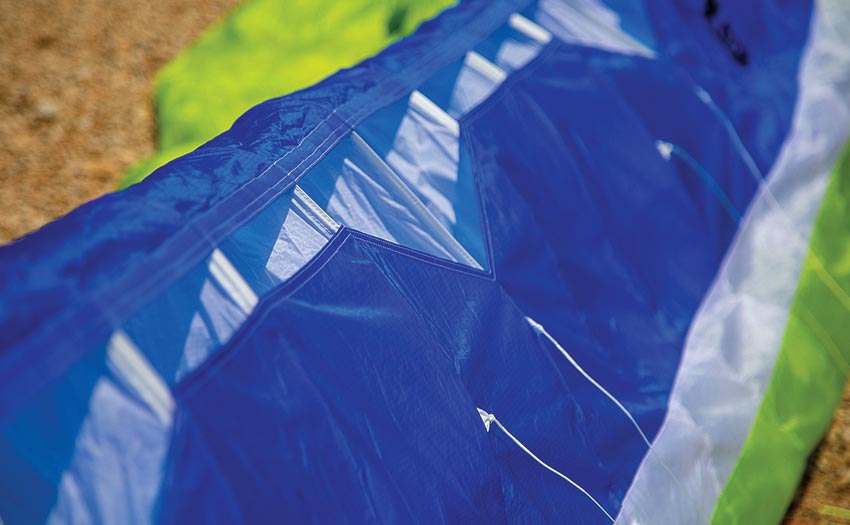 The Golden 4 had fairly traditional cell openings and relied upon internal structures to optimise internal airflow. The Golden 5 now inherits the VO leading edge and strategic use of nylon rods helps to retain the clean profile. Another striking improvement is the shape of the wingtip: it is more swept-back and is kept in a consistent shape using nitinol wires and mini-ribs in the last few cells. Gradient call this the ‘Falcon’ wingtip. On the Aspen 6 and Golden 5 alike these give a beautiful shape but, more importantly, help to reduce vortices and induced drag and improve overall glide.

Moving to the Golden from wings with unsheathed lines it was a relief in some ways to find a larger set of risers to handle and mostly brightly coloured, sheathed lines. Performance line-sets are fantastic but really, for new or occasional pilots ease of use and durability is paramount. Gradient have struck a balance: unsheathed Liros DC and Edelrid Magix Pro lines at the upper level; durable and brightly sheathed Edelrid Tarax and Helix lines for middle and lower. 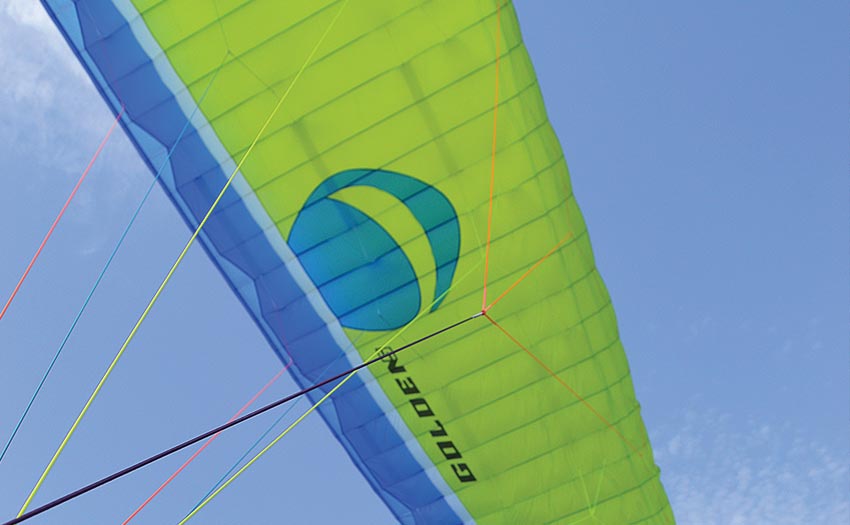 The VO system on the leading edge can be seen clearly. The wingtip is swept back using nitinol

The wing inflates easily with just a gentle tug on the main A-risers. Some earlier Gradients had a dead spot just before coming overhead but the Golden 5 inflates and rises progressively. In stronger conditions of course I needed to catch the wing and take a slight wrap while waiting with the wing above my head, but otherwise it made even my groundhandling look a lot better than it is. It is no barge though, so responded well to little brake inputs if I wanted to move around take-off.

The three-riser set is fairly traditional, with separate As for big ears and floating Cs to help retain the profile of the wing. Once in the air though you notice the new C-line loops. Increasingly pilots learn to fly actively at speed using C-line loops, and Gradient feel that by adding them on the Golden the pilots moving up to the Nevada or even the Aspen will learn an important skill. 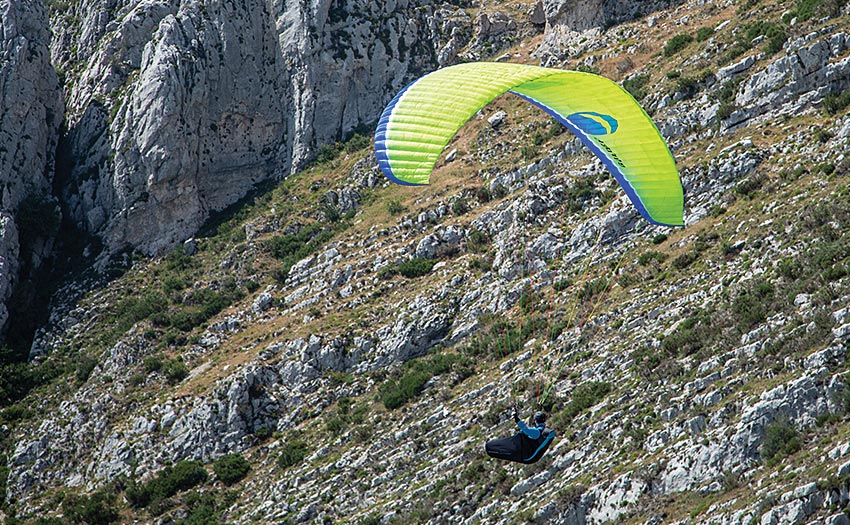 Take-offs were mostly windy or thermic. The wing was easy to manage on the ground and responsive to harness and subtle brake movements to correct. I didn’t feel the need to put in too much footwork to stay under the wing.

Once off I found that brake pressure was progressive and definitely not heavy as some lower EN-Bs can be. Response on brakes alone was nice and once I introduced weightshift and some monitoring of the outside brake I could easily modulate turns between flat and efficient and hooligan mode.

I have always felt that pilots progressing need to understand the air rather than just battering through it on a bomb-proof wing. The Golden 5 strikes that balance well. The leading edge and brakes tell the pilot what is going on without being too nervous.

Moving from the upper-level EN-Bs to the Golden 5 I felt the wing was more stable and easier to manage in rough air. One negative at first was that the wing did not seem to cut into thermals so readily. It seemed to have a very minor hang-back. I eventually found that the best strategy when searching for a climb was to fly hands-up as much as possible to allow the wing to enter cleanly.

On some later flights I found myself entering larger, smooth areas of lift with half-bar before backing off and entering my turn. I also started to use the C-loops to manage pitch on high-speed transitions. I’d encourage newer pilots to let the wing fly at trim as much as possible when searching for lift or on transitions.

In later flights I had a few ridge runs along our favourite mountain. It is a rather bouncy 10km out-and-return flight, with some strong convergence and little bullet thermals: ideal for experimenting with the wing’s speed and active flying.

I found the acceleration was great, but what impressed me more was the comfort at speed. The wing felt most at home flying around at half-bar on most transitions. As I went into more active air I tried to stay on bar and use the C-risers to manage my course and pitch.

Directional changes were easy and pitch took a little more practice but I was soon very comfortable. Lower level pilots should work up slowly to active flying at speed, but once they get used to the technique and the subtle movements required, the Golden 5 responds well. 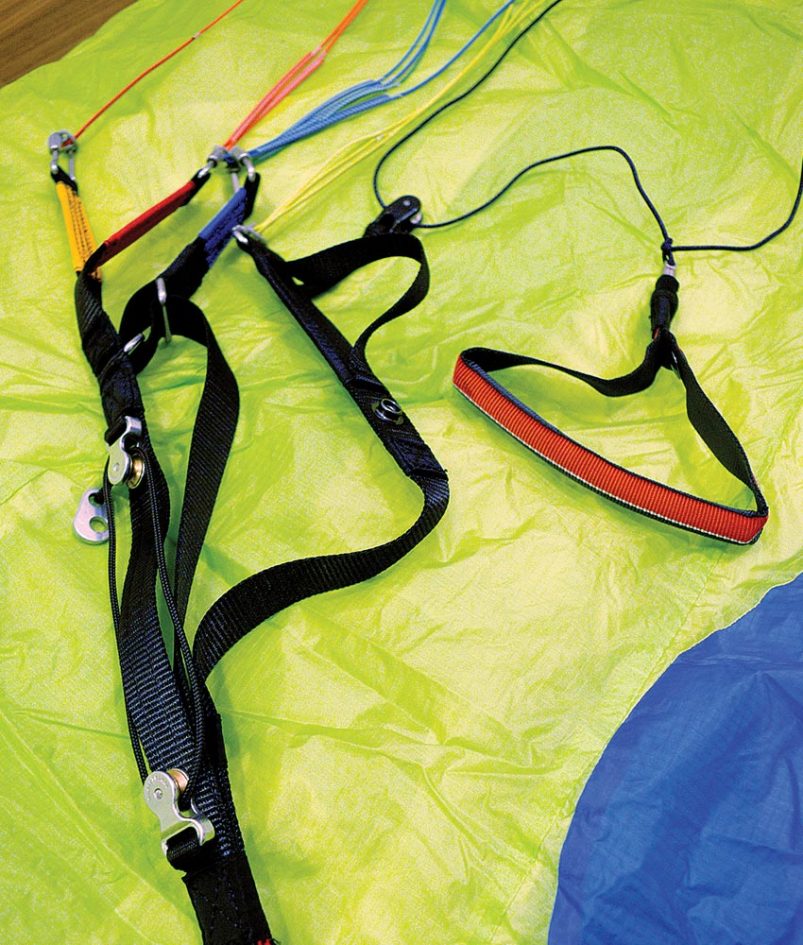 Straightforward risers and colour-coded lines give it an easy feel

For many Gradient pilots the ability to sniff out light thermals on a light day are what sets their wings apart. We had one really tricky day where the best climbs were only 2m/s and hard to centre. The wing really drew and nudged me towards the best lift. Once I found the lift the turns were efficient, and when things were narrow I could easily put the wing on its tip and dial upwards.

Newer pilots should try to get used to monitoring the outside brake as the Golden flies best when you monitor both brakes. This is an important skill to master before stepping up to a higher EN-B.

In turbulent XC conditions I was delighted to be aboard the wing. There was some pitch movement of course, but it was not overly demanding. There is enough pitch energy to give you the sensation of being on a lively agile and fun wing, but without the workload of higher-level wings.

I had only one collapse and was impressed at how quickly the wing re-inflated and how easy it was to maintain course. Induced collapses were uneventful and recovered in one clean movement. 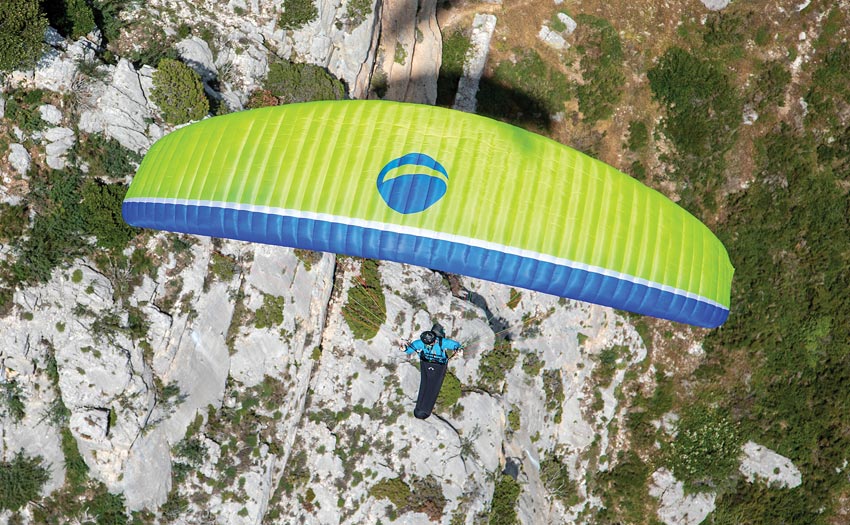 Gradient fans who want to upgrade to the Golden 5 from its predecessor will find a familiar wing with extra performance features. Photo: Marcus King

With cloudbase approaching fast, losing height using ears and adding a little bar was the best approach. Spirals were fun but I was glad I took my usual approach in making a gradual progressive entry. The wing builds speed quite quickly if you have no outer brake applied. I’d therefore urge some caution for your first few spirals and suggest that you work on modulating the outer brake to control the speed of descent.

Comparing it with peers such as the Epsilon 8 and Triple Seven Knight I would say the Golden 5 has the edge when it comes to feedback and efficiency in turns. It feels more alive than the Epsilon and more settled in flight than the Knight.

Thinking back to my first wing after qualifying I wanted to buy a wing that would be easy to use and fuss free. I also felt safer knowing what the air felt like rather than flying around with a false sense of security on some kind of aerial battering ram.

If this sounds like you then I would recommend trying the Golden 5. It really is a great all-round wing. Gradient have done a good job of keeping the familiar handling and feedback while adding in some extra performance features where it counts.