Designed for both paragliding and paramotoring the V-King is Dudek’s latest single-skin wing. Described as the perfect travel glider, thanks to its compact size, Dudek say it’s also the perfect companion for the lightweight paramotors that have seen a recent rise in popularity. Marcus King took it out for some hike-and-fly as well as some powered flying.

The wing is based around the concept of a leading-edge tube. Dudek say they first looked at a concept like this in 1999, when they were developing a lightweight kite for Polish polar explorer Marek Kamiński, the first person to reach both North and South Poles unsupported.

After that the idea was put aside until 2014, when the technology was re-surfaced for use in a wing for remote control paramotors – the S-Lite. The work on the radio-controlled model then made them look at developing a full-size version in 2016. An offshoot of the same project was the Run&Fly, the world’s lightest paraglider. 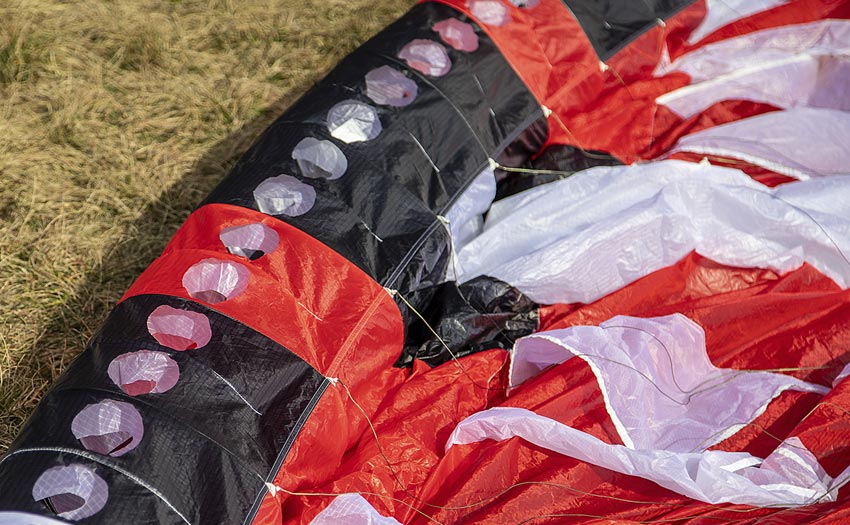 The leading edge self-inflating spar. With no air vents at the rear, this spar gets solid in flight. Detail shots: Marcus King

Although definitely in the single-skin class, the V-King has noticeably more structure than a classic single-skin wing. Up front is a tube on the leading-edge. This has cell openings to make it self-inflating. Unlike some other designs it doesn’t have any vents at the rear, so it becomes very solid.

Running back across the chord from this tube are three inflatable spars near the centre, and two smaller one on the wingtips. Dudek say these are used to stiffen the wing and to help achieve an optimal canopy shape, something that is particularly hard with low cell-count wings.

The design also uses V-tabs on the A-lines to reduce the number of lines needed to support the span of the canopy. Using this method means they only need to use three main lines on each side. Reduced line consumption is always good for performance. The lines themselves are all unsheathed. Dudek have said they will release a school version with sheathed lines. 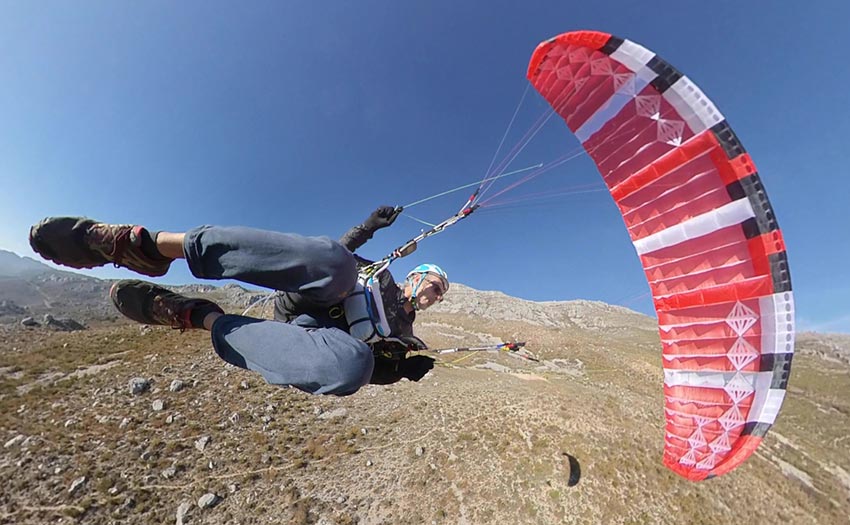 The wing is completely constructed from Porcher-Sport cloth: mainly 27g/m2 along with some hard 32g/m2 for shaping and support. The total weight for the 20m2 size I had is 2.32kg making it heavier than the Niviuk Skin P or Ozone XXLite 2, but lighter than the Apco Hybrid. There are some nylon rods in the leading edge but these are not too long so packing size is still nice and small. The aspect ratio is quite mild at 4.8; this compares to 5.6 for the Ozone XXLite 2 or 5.5 for the Niviuk Skin 3.

The colour-coded lightweight risers are made with thin Dyneema webbing. These might raise eyebrows among paramotor pilots, but paraglider pilots will be more used to them. They are nicely finished, with colour-coding on the attachment loops, and neoprene-covered softlink connections to the lines.

The brakes are simple loops and attach with magnetic clips. They have to be pulled down to release, making them nice and secure. Interestingly the brake line runs from the handles to both the brake lines on the wing and the rear riser. This to give a better flare, but it does mean there are more lines to check when setting up on the ground. However, in the air it all feels normal.

The wing has a speed system but no trimmers. 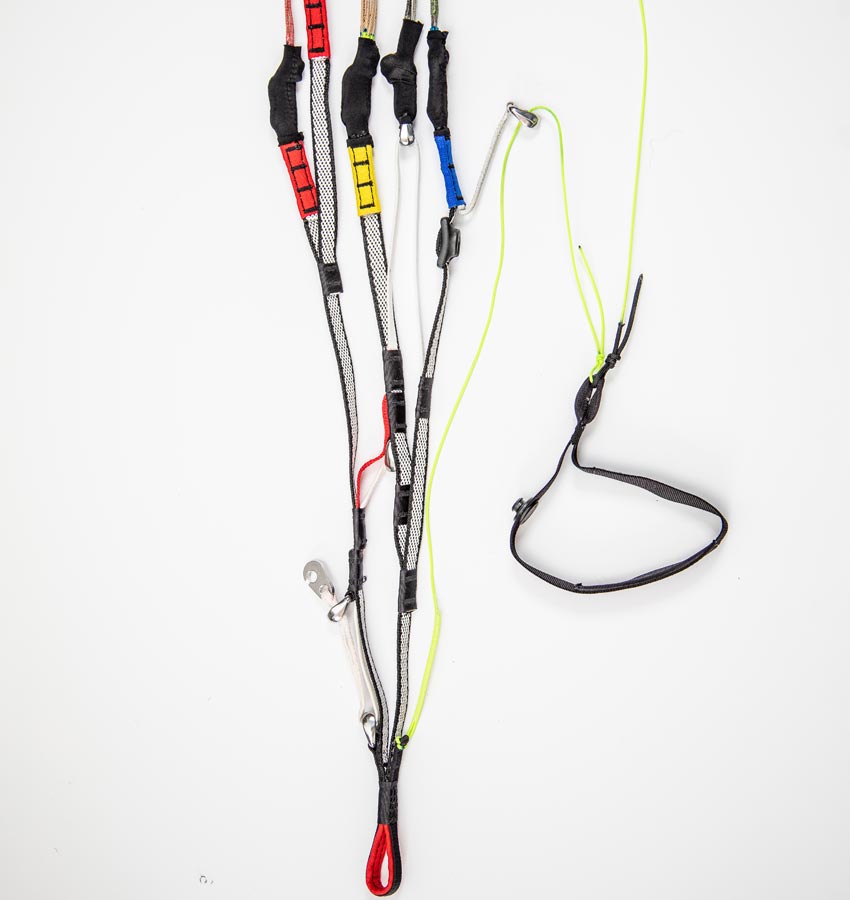 The riser system, with skinny brake handles, neoprene covered softlinks, and basic speed system. Note the brake line, which runs to the brake-fan and the rear riser. This takes a bit of care, especially when paramotoring

With no wind on a still early morning I set up for a forward launch. Dudek recommend you don’t use the A-risers. Instead they say you should just hold the brakes and leave the risers over your arms. Using this method the wing rises quickly and easily.

My first couple of launches I was a bit overzealous so it shot up pretty quickly, although it was easy to stop it overshooting with some brake pressure. Once overhead it needs very little control and will sit there happily with very little wind. Pushing off it lifts you into the air easily, even in light conditions. 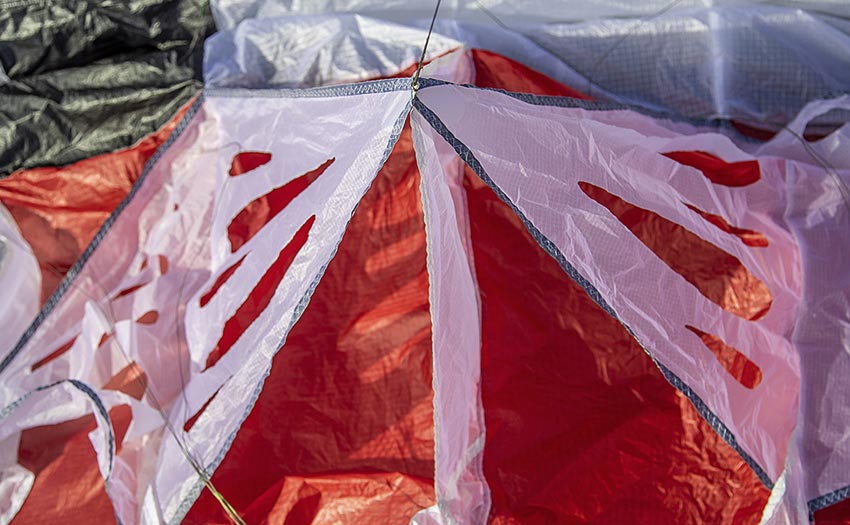 Ribs in the air flow mean the glider is not susceptible to rolling. Lines are all unsheathed

Flying in the early morning ridge lift with gentle bubbles coming off the sun-drenched rocks, the wing moved around a bit but never far from above my head. It feels a lot more solid than some of the single-skin wings, thanks to the inflatable tubes. Also, the low aspect ratio gives it a compact feel, which is reassuring to fly.

It’s not the most reactive in turns, although I was flying near the bottom of the weight range. By pulling the brakes inboard I found it turns more tightly. There is plenty of brake range, making it a very accessible wing. Low aspect wings can roll quite easily, but with ribs in the airflow, the V-King isn’t susceptible to unwanted rolling.

In the manual Dudek say the wing wasn’t designed for thermalling, but with the 20m2 size I was able to make the most of the bubbles of warm air. It can dive a bit in turns, but if you are careful with the brakes you can keep things relatively flat and efficient.

The wing doesn’t seem to get pushed round too much but can need a little nudging to get into the strongest parts of the lift. All in all though I found it fun to fly in the morning thermals and far less work than some of the earlier single-skin wings that I have flown. 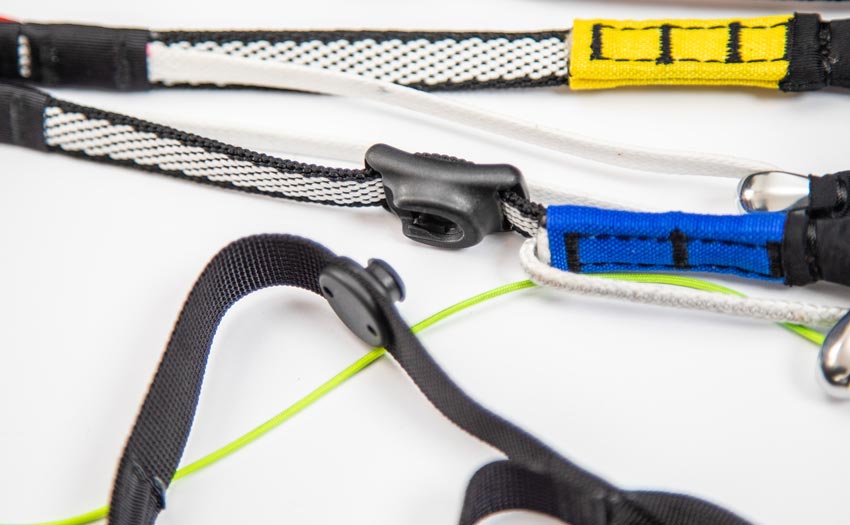 Strong magnets on the brake keepers. The risers are made of thin Dyneema webbing

It is possible to get dynamic with the wing. Wingovers need reasonable timing to get big, and like other single-skin wings the V-King drops back into straight and level flight as soon as you let it. It’s the same for spirals.

As I came into the landing field, the limp windsocks made it obvious that there was next to no wind. By coming in hands-up I was able to use the energy for a good flare. As you go deep in the brakes you will feel an increase in pressure as they start to pull on the rear risers, but this gives greater authority to the flare. I made a few nil-wind landings, all with good flare. 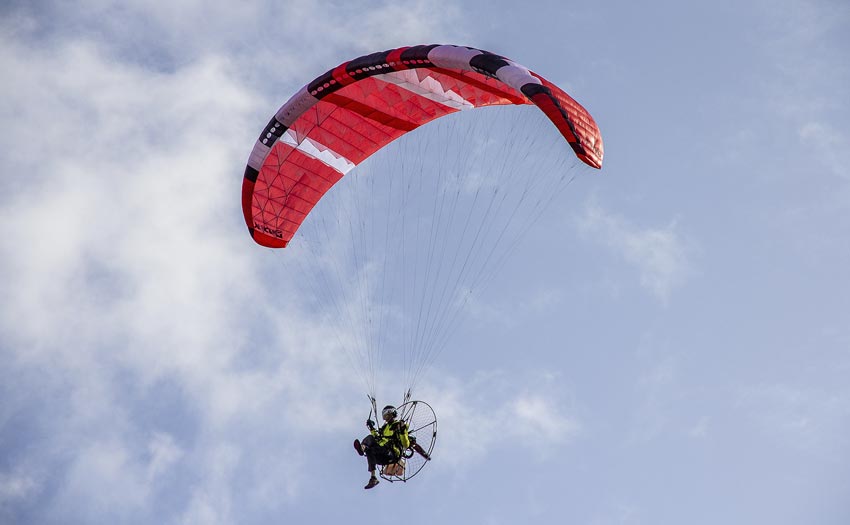 I was keen to try the wing under power so took it to our local paramotor-friendly field for a fly. Again, the wing is super easy on the ground. Launches are all very calm and controlled. I did a mixture of forward and reverse launches, and on all occasions the wing was calm and unhurried.

With the Moster-powered Fly Products Rider I was using, the V-King didn’t really need much running. It seems to generate a good amount of lift at relatively low speed so you are quickly in the air.

One thing I did notice is that the brakes feel a bit more complicated on the ground. With two lines going from them you have to take an extra bit of care setting up, so they run clear. As mentioned, I also noticed they seem to fly behind you a bit if you let go. In paramotoring you should of course always put brakes on the keepers when not in the hand, and Dudek’s magnetic keepers are particularly easy to use and secure.

Landings are simple. Coming in with hands up and then giving a good flare will see you arrive gently on your feet. Once down you can easily keep the wing above your head to play at touch and goes, or to walk it across to your car.

I can see why there is demand for a school version of this wing. The low speed for launching and easy landing make for a wing that is great for learning on. With a lot filling the mind of a new student it is great that everything happens that little bit more slowly.

Under power it is easy in turns. It’s not super dynamic but it feels easy to balance the power with the energy of the turn. It feels like the wing doesn’t build as much energy in turns as double-surface wings, but this makes it much easier to control the ballooning as you come out of tight turns. This adds up to a wing that is easy to get the hang of ground skimming on and I was very quickly foot-dragging on it, despite not having had the chance to practise that skill for a while.

Not wanting to upset the locals, after a bit of playing I decided to head off cross-country. It’s not the fastest, of course. With the 20m2 size and the Fly Products Rider flying at around 1,500m ASL I measured the trim speed at around 34km/h. There are no trimmers but there is a speed system, although this has a relatively small travel giving around 6km/h extra at the top end. So it’s not super fast, but it’s fine for some sightseeing, especially if you’re not intending on fighting into a head wind.

On cruise the wing seems pretty efficient, not requiring too many revs to maintain level flight. It feels pretty comfortable too, although it transmits the bumps a little more than bigger wings. It is however stable both in both pitch and roll, and there was absolutely no sign of any oscillations, flying with my setup. 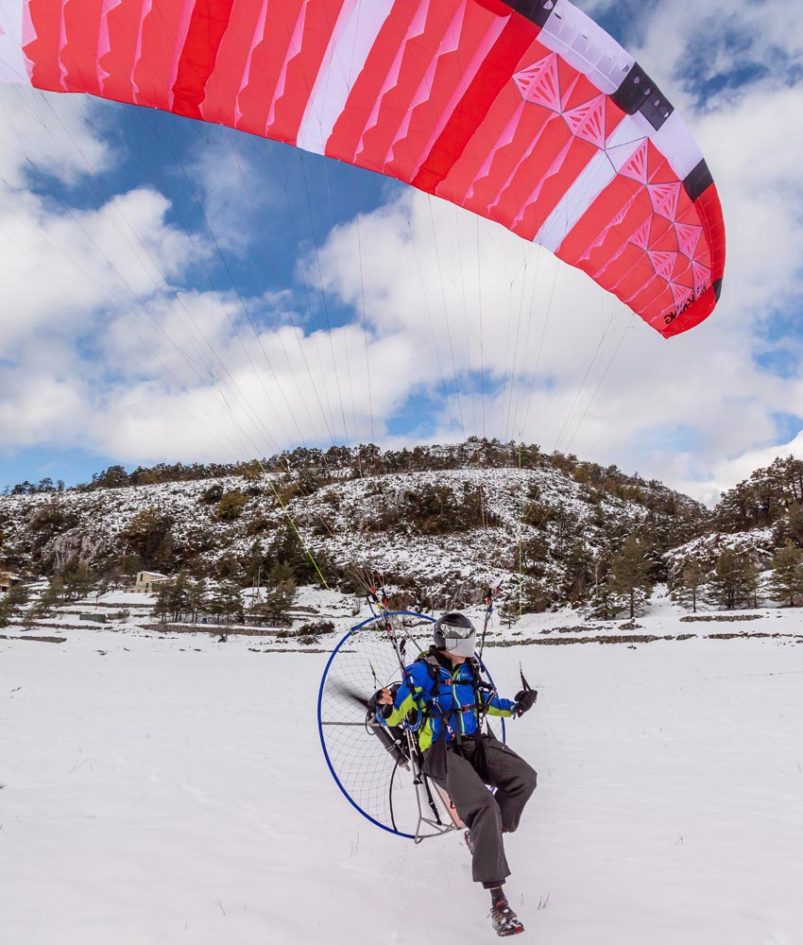 Whether landing on a paramotor or not the flare authority is good. Photo: Charlie King

The Dudek V-King is a great all-round wing. It may not be the lightest for hike-and-fly but it is easy to fly, combines the advantages of single-skin wings with nearly the same performance as double-surface wings and has EN-B certification. Its small packing size makes for a great travel wing that can be slid into your luggage on the offchance.

It’s a good option if you want to do a bit of paramotoring too, especially if you have a lightweight rig or are just starting out. And while it might not be a cross-country mile muncher you will enjoy some great flights on it. Plus with everything happening at lower speed you can build your skills safely on it.