“Is it a paramotor wing?” “Is it a reflex wing?” Honestly, the questions I got walking to take-off with the Optic 2 Light. Dudek might be best known as a paramotoring brand but they’ve been designing great free flying wings for several years too now, so button it, alright?

The mid-B sector isn’t my area of expertise, and truthfully, I didn’t quite know what to expect with the Optic 2 Light. I’ll be honest and lay it on the table – I actually didn’t expect much. And I was very pleasantly surprised. Flying the wing first in the UK in mellow autumn conditions, I discovered a wing with lots of character, and flying it right at the top of the weight range I had a huge amount of pleasure with it. My first impressions were that it’s definitely a mid-B with a higher fun factor than a straight-out-of school wing. 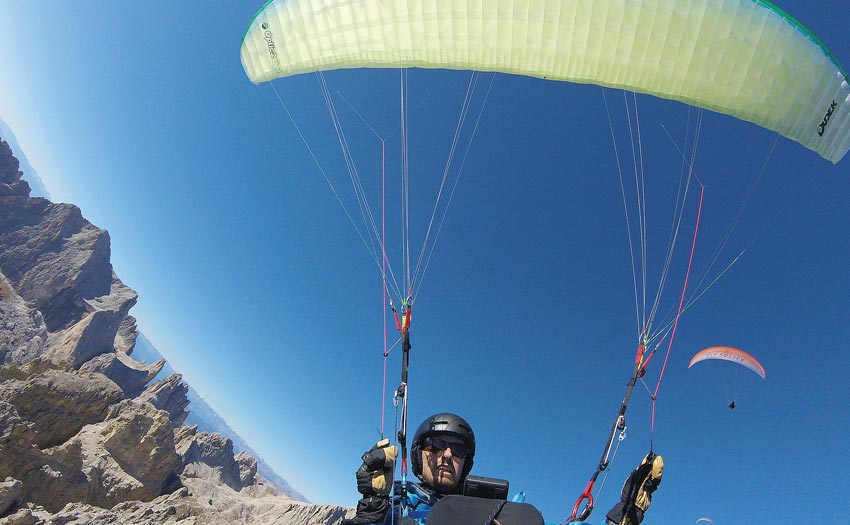 At home in the Dolomites… Brake travel is quite short and precise when thermalling – it doesn’t roll into the climb as much as some mid-Bs do, but stays nice and balanced. Photo: Hugh Miller

Design
This is a 5.5 aspect ratio, 51 cell design. We weighed it at 3.95kg, putting it in the same ballpark as say the Ozone Geo or Nova Ion 4 Light. The construction of the canopy is really clean, with less noticeably fewer wrinkles and lines than some other mid-Bs when groundhandling, and a very smooth top surface when viewed from above, in the air.

All Edelrid lines are unsheathed and rather curiously dark grey, leading down to 12mm wide risers – narrow for a wing of this class. I’m not a fan of the magnetic brake clips, which have slight overhangs to help keep them in place. They’re fine for alpine flying where you generally only unhook them from their keepers once and then launch. However, if you’re faffing about on small hills with multiple side landings and relaunches they quickly become a pain – I broke one the first day out by yanking it off while scrabbling to get off and into a climb. The lines tended snag a little on each layout, needing a little pre-flight shaking out each time. 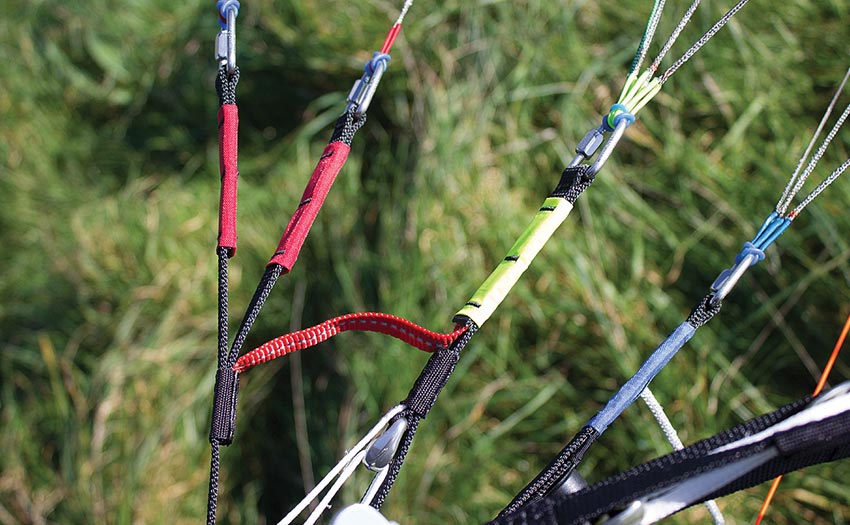 In the air
In climbs, there are lots of nudges and hints, and it’s a lovely, solid unit with great spanwise cohesion once you’re locked into the core. Brake travel is quite short and precise when thermalling, but the stall point is somewhere 100 feet below the bottom of your harness – similar to the Ion 4. Crucially, it doesn’t roll into the climb as much as some mid-Bs do, causing a big loss of efficiency, but stays nice and balanced. Having said that, most intermediate pilots tend to fly a little too conservatively, putting in wider 360s than are necessary, and in this kind of search pattern the wing feels more alive than the Ion 4 Light, giving more nods and hints as to the air’s movements.

On bar, the leading edge feels nice and solid. Pitch stability is good, though at trim there are a few nudges and rustles that those not used to lightweight wings might find initially disconcerting. They mean nothing though – it’s just that Porcher 27 lightweight cloth is particularly noisy. I had a very enjoyable afternoon climbing up in 2-3 m/s cores and pushing a few kilometres out front with an Artik 4, a couple of Zenos and some Sigma 10s. Of course they got away a little on the glides, and ok a little on some climbs too, but as soon as I hooked a zinger, my God I was grinning like a smug git. It felt like the Optic 2 and I were pirouetting on the centre of the ballroom of Strictly Come Dancing while the others did lazy waltzes around me. Or something like that. It’s got great flat-turn-while-cranked-up-ability. 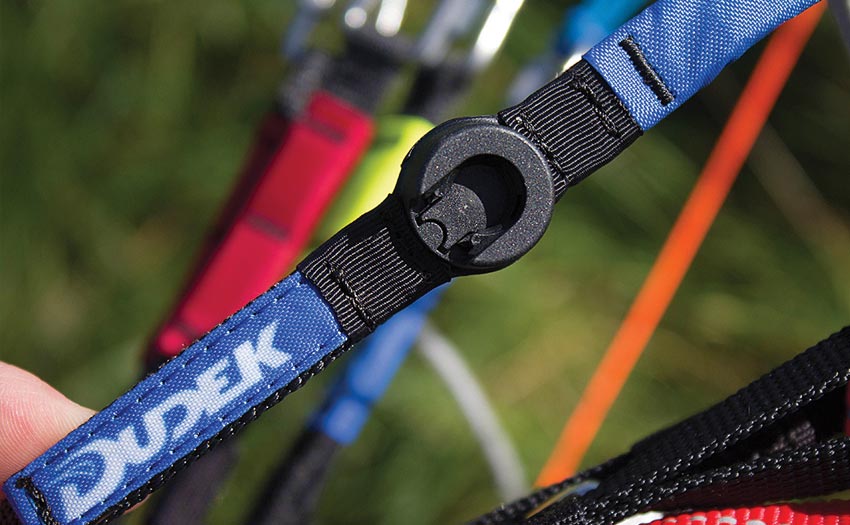 In the Alps
I took the Optic 2 on my first ever trip to the Dolomites where we were rewarded with three October days of blue skies and climbs to 3,250m. On our first day, we had to wait for the valley winds to kick in against a dominant northerly, and climbs were spiky and disorganised. It took me a while to get dialled in. Fear’s a funny thing – it was very much situational. Big limestone walls and 50 other gliders to contend with and it wouldn’t have mattered what I was on – I was gripped! 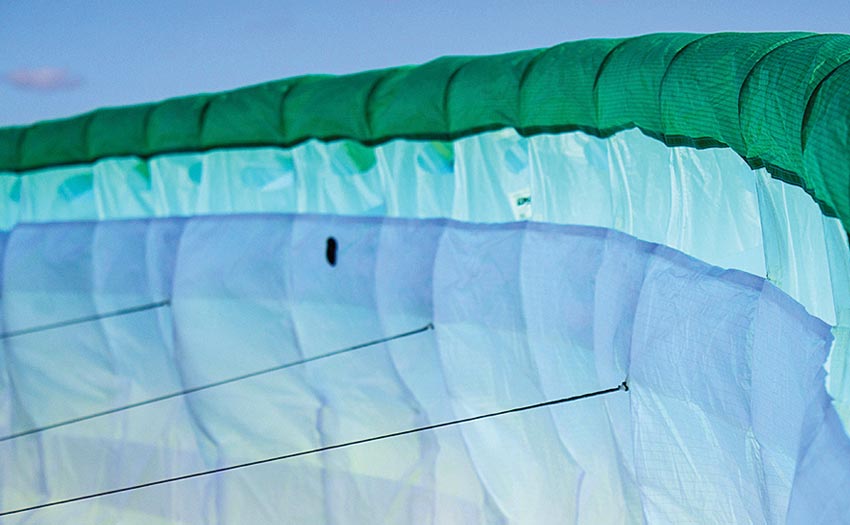 By the third day though I was really enjoying the zingy handling of this wing in such awe-inspiring terrain. Surfing the almost-overhanging walls and topping out to discover a climber perched right on top of a three-metre wide ledge was absolutely mind-blowing. I discovered a new descent technique with this wing too. You can pull one of the A-risers down, and induce a 30-60% side collapse, making it smaller or bigger by just pulling a few centimetres harder or softer. Initially, the wing tends to sideslip towards the flying side of the wing – so if you’ve pulled the left A-riser, you find yourself crabbing and veering to the right. It’s a little uncanny. 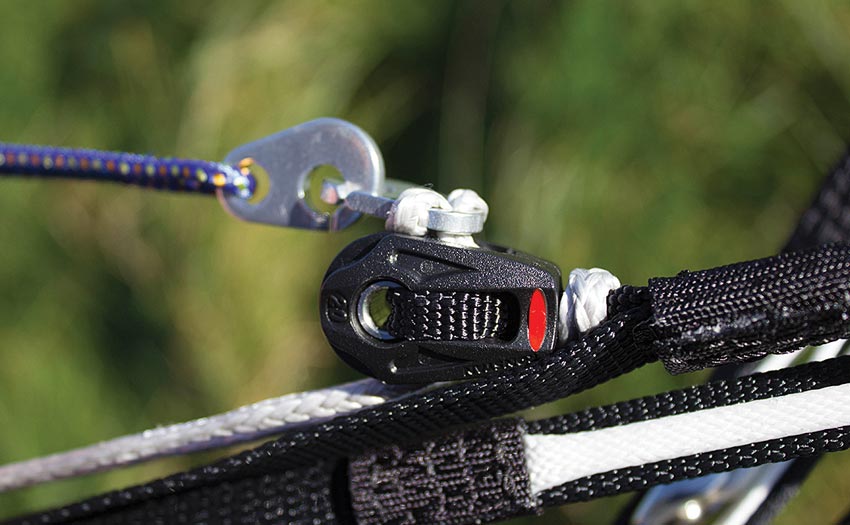 I don’t know if the cross-bracing of my harness was helping, but I actually had to lean a little into the collapse to go in a straight line. Normally of course, you’d be leaning slightly away from the collapsed side to stop yourself from rotating in on the broken side. Much more fun than big ears which, by the way, were incident free. They were a bit more ‘flappy’ than I’d have liked – and this observation was shared by pilots around me, watching the ears flail back and forth and needing a good firm hold of the risers to stay in – but I’m being fussy. 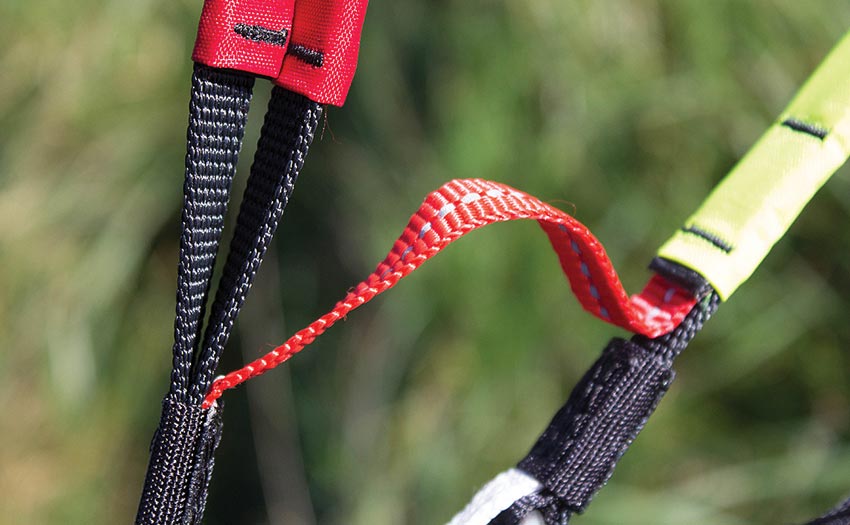 The speed-system limiter, between A and B risers

On the ground, the light cloth also makes it a bit of a pest, as it likes to inflate so quickly, and it likes to be up and flying, or down flat on the ground – and not much in between. It’s long-to-stall travel makes that transition harder to manage, but this quibble can’t solely be aimed at the Optic 2 – most lightweight B’s have the same characteristic. Get on those rear risers! 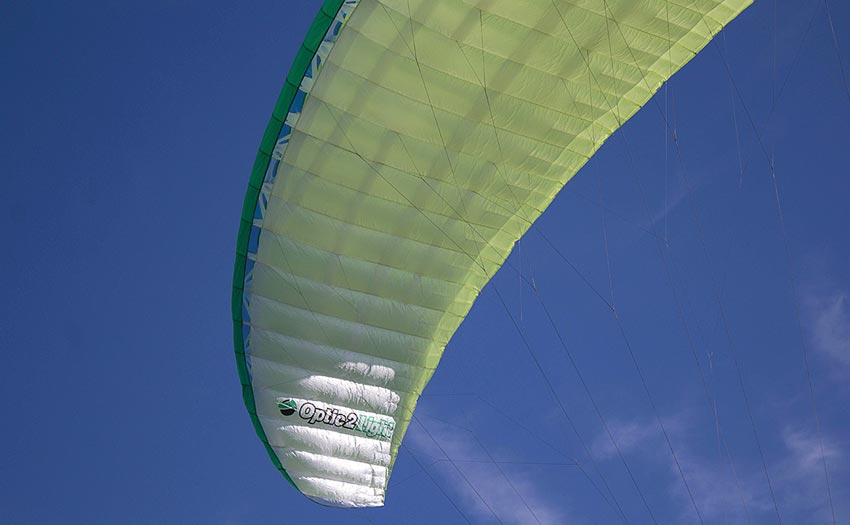 In summary
To summarise, even as a pilot pretty smitten with his two-liner competition wing, I was pleasantly surprised with the Optic 2. Its handling is far more precise and direct than I’d expect – perhaps the brake travel is too short for the really inexperienced pilot, but the talented intermediate pilot, flying it at the middle rather than the top of the weight range, would have a lot of fun with this wing.

It took me a while to get my head around the Dolomites having only flown the mellow UK and Colombia this year, but once I got there, the grin grew and grew. I would definitely enjoy one for hike and fly and general just all-round fun flying, I reckon. Skilled intermediate pilots who fly say 30-70 hours a year will find enough performance for good XC flights, and the kind of handling and stability that’ll have them wanting to fly more, rather than less. Crucially, the Optic 2 is also priced so you’ll have a few spare euros for your hotels during your next vol-visa trip too!