With an aspect ratio of 5.7 the new Base 2 is sleeker than its predecessor and also has a new colour scheme Photo: Charlie King
EN-B, Reviews

The Base 2 is the third incarnation of the high-B in the BGD range. It follows the original Base (2015) and the Punk (2018). BGD went back to Base, so to speak, because, “We thought Punk was a better name than Base, but now we’ve changed our minds!”

Since their first two high-Bs, BGD owner and designer Bruce Goldsmith has been joined in design by aeronautical engineer Tom Lolies. He has been working on the company’s bespoke fluid dynamics modelling software. Alongside Bruce and Tom are test pilots Tyr Goldsmith (Bruce’s son) and Dav Geronimo, who works on the final trimming. The company is based in the south of France. 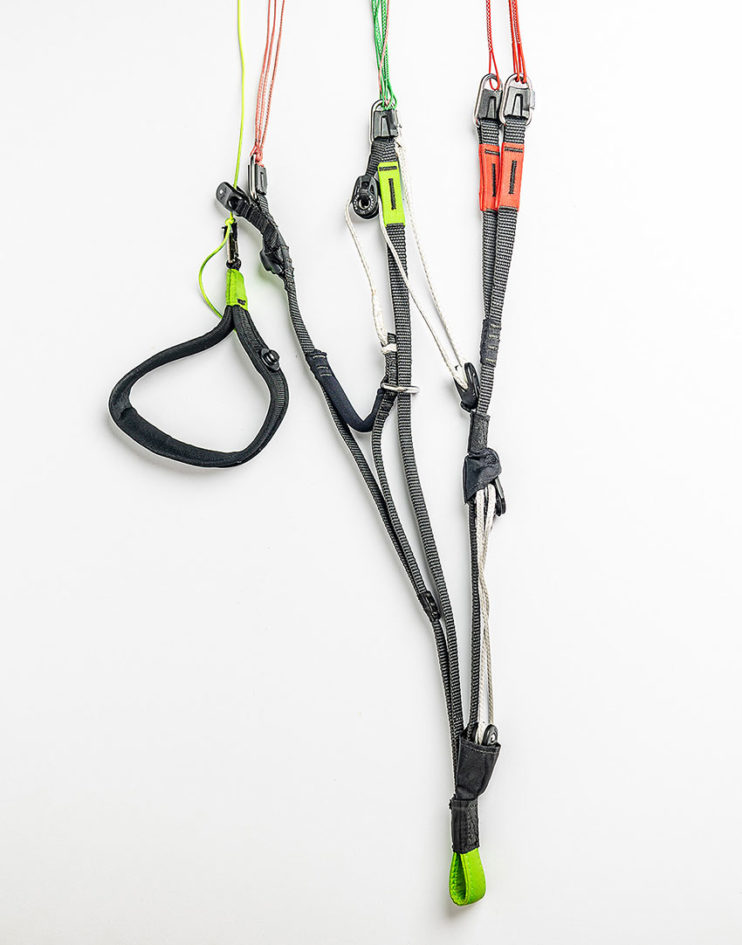 On first look the Base 2 looks like a baby Cure, BGD’s EN C. Not only does it look sleek, the new colour-scheme has thrown out the Minecraft-inspired look and gone for a series of multicoloured interlocking diamonds and swooshes. As you expect from BGD it’s colourful, but somehow more elegant.

The sleek look is further enhanced by its aspect ratio. This has increased to 5.7 from the Punk’s 5.4. An extra three cells have also been added, taking the total to 57. This means the design now also has a central cell, which should give a bit more weightshift control. BGD say that despite the increase in aspect ratio they have made a wing that is easier to fly, less dynamic and with reduced roll.
Designer Tom Lolies said they had simulated “hundreds of profiles” looking for the best mix of “stability and good floatability, the way the wings surfs up the air.”

Picking it up my first impression was that it feels quite heavy compared with some of the semi-light wings I have flown recently. However, at 5.4kg for the ML it is much the same as the Ozone Rush 5 (5.5kg) and a full-fat Nova Mentor (5.3kg); the similar-sized MacPara Eden 7 meanwhile is around 4.75kg. In the past BGD have produced a lightweight version of their EN-B wings, so if weight is important you will probably want to wait for that. 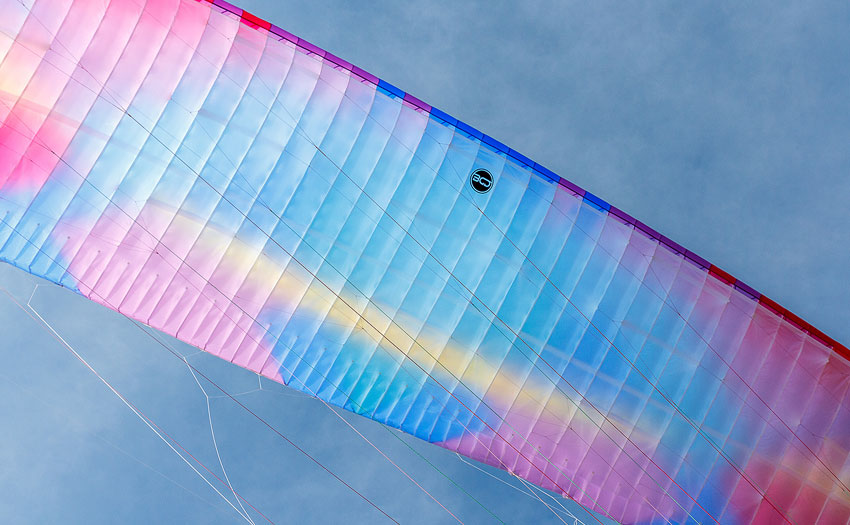 The wing uses 38g/m² material on the top surface with 40g/m2 on the bottom, both of which feel substantial after a winter flying gliders made of 27g cloth. It looks very clean, with very few wrinkles. BGD use their Chord Cut Billow on the leading edge while at the back there are mini-ribs. Brought over from the Cure is the ‘double-skin leading edge’ – where the bottom surface is folded over on itself. This creates a small internal cell that is inflated by the internal pressure giving a cleaner, more stable leading edge.

The leading edge also uses a sharknose profile, with two plastic rods to keep the shape. There are also stiffening rods in the centre of some of the cells near the tips. I was slightly surprised at this as I thought these were more normally used near the centre. Bruce explained they are there to reduce sail deformation at high speed, and, “our tests showed that it was most needed just on those cells.” There are also plastic rods over the C connections on the cells, where the internal diagonals attach. BGD say that they have used soft rods and that no special packing methods are needed.

The internal diagonals use three fingers and pass through each other in a complex arrangement that the company say saves weight while creating a more solid wing. Unlike some wings in this class most of the lower lines are sheathed and colour-coded, making handling easier. Only the rear main lines are unsheathed. The risers are made from thin webbing, have wide colour-coded hook-in points, Harken pulleys and well-padded colour-coded brake handles that attach with BGD’s usual one-way magnetic clips. 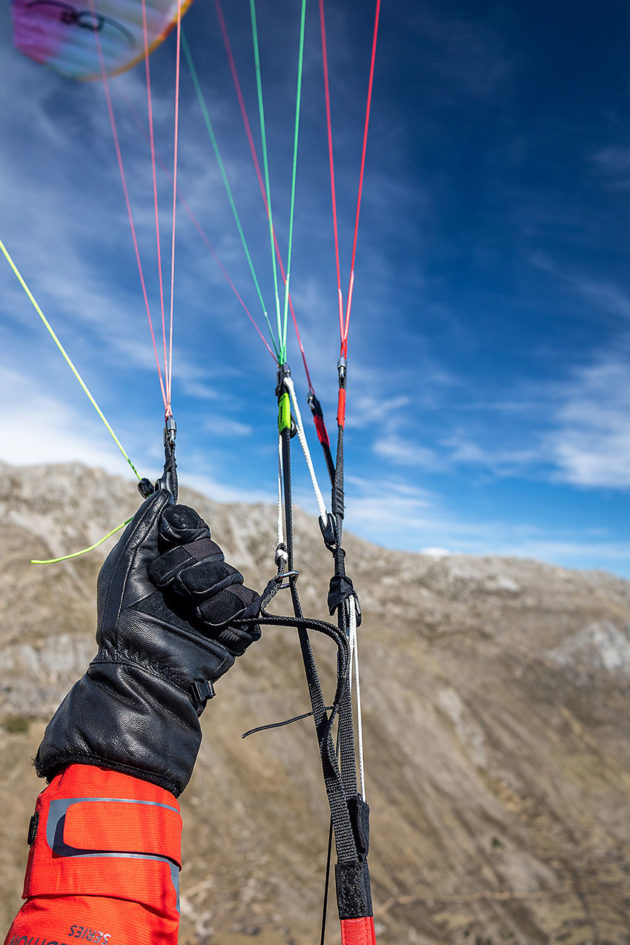 The B/C-control system is well designed and features an extra webbing riser that takes the pilot’s weight at trim. It’s to avoid the pilot hanging directly from a pulley

The real feature of the new riser-set though is the B/C control system that uses a pulley on a Dyneema loop, but has an additional webbing riser that takes the pilot’s weight at trim speed. Bruce told me this isn’t for safety: “We wanted to have a great C-control system but at the same time avoid the pilot hanging directly from a pulley. Marine pulleys are strong enough, but there also needs to be a gearing mechanism in Dyneema that isn’t as dimensionally stable. Dyneema changes length and knots tighten and loosen. Hanging on a single piece of Kevlar-reinforcing is very dimensionally stable, and we want to keep this benefit.

“The riser construction maintains the advantage of traditional risers, helping to ensure that the wing stays correctly trimmed. The Dyneema line is only used when the pilot is accelerating or C-steering, so they do not affect the trim of the glider.” There is no C handle – instead the lower part of the C-riser is padded in a similar fashion to Ozone’s Delta 4. 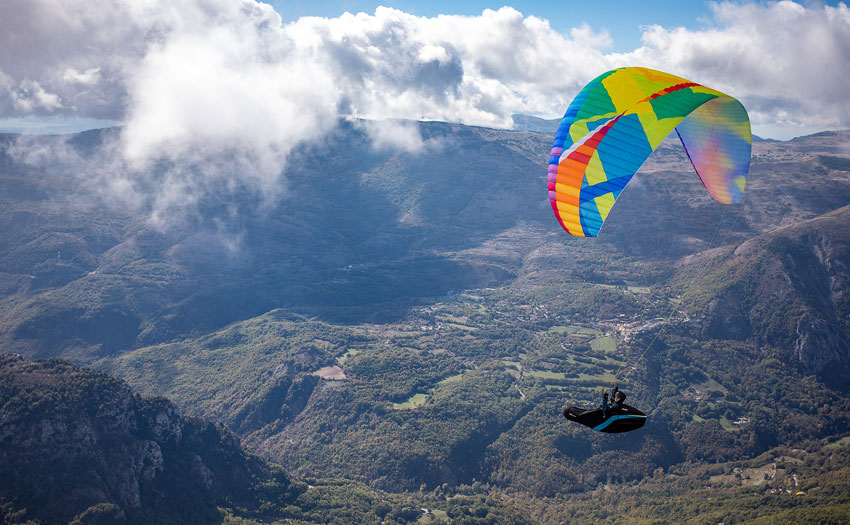 In all the Base 2 is a well-balanced, exciting glider. Photo: Marcus King

On launch the wing comes up slowly and steadily with no sticking points. In that respect it reminded me of the Rush 5 from Ozone. It is particularly calm in strong, gusty conditions. Once overhead it needs very little in the way of control, it sits there ready to fly. Pushing off it quickly lifts you into the air.

I have lost a bit of weight after taking up running in the lockdown. Old me would have been happy with the 108kg top weight of the ML Base 2, but I was a bit worried that being that bit lower in the weight-range would make the wing’s handling less than sharp. I needn’t have worried: BGD have done a great job with the handling. While the Punk had quite a bit of roll, the Base 2 is the opposite and wants to turn flat and efficiently. The brakes over the first section of travel are very precise, allowing you to place the wing where you want. Pushing it a bit harder does kick it up onto a wingtip for getting round in the tight cores, but it’s all very progressive and you won’t get any surprises. The designers have used both asymmetric and symmetric reefing to affect the way the trailing edge is bunched. Combined with the structural work inside the wing this creates a very nice, smooth feel to the brakes with precise increases in pressure. It’s even noticeable in the flare, where there is a nice little extra notch of pressure just at the point the wing pivots as you land. 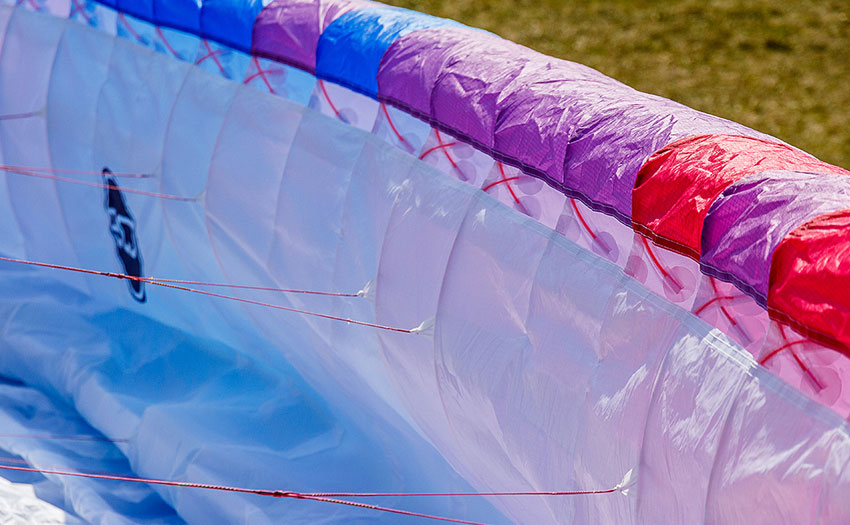 Well set back A-lines, sharknose and chord cut billow all feature on the leading edge

We enjoyed quite strong spring-like conditions during testing, as the snow melted leaving sunbaked rocks blasting hot air skyward. This was all mixed with quite a bit of meteo wind coming over the back of the hill up high. In these conditions I would normally like to be loaded on a wing so I can carve into the cores and avoid the rough stuff at the edges. But despite being lower in the weight-range the Base 2 went exactly where I wanted. I never had the feeling of having to force it into the cores, instead it bit in and surfed up the lift without any big pitching. Its climbing performance was obvious as I was able to climb out on days when most were stuck in stable air low down.

This is an easy wing to fly for its class. It doesn’t need constant attention, and everything feels calm. The information is there through the brakes and, like other good wings, it feels like the wingtips are an extension of your hands so you get a good idea of what the air is doing without it being nervous. Pitch is well controlled without losing all feel and it surfs up turbulence. This is the type of wing that blurs the borders between EN B and EN C, giving you top performance but with less demanding behaviour and a comfortable ride.

On glide it is more of the same: a comfortable ride that is undemanding even pulley-to-pulley. The B/C-control system gives a really good feel, somewhere between the Ozone Delta 4 and Flow Fusion in terms of pressure, and lets you know what the wing and air are doing. Although maybe slightly softer in terms of the wing’s reactions it allows you to have great control. I naturally found myself on it when not thermalling and was happy ridge-running, controlling the wing with the system and searching out the lift and slowing up in it.

On bar you feel properly connected. I have to say it reminded me of flying the Ozone Delta 4, an easy C. I think the Base 2 will be equally good for big days out flying cross country with a relaxing ride giving you the headspace to make decisions. Going pulley-to-pulley I measured a speed increase of around 14km/h with my GPS, with the wing still feeling solid. In their promotion of the glider BGD talk a lot about the wing having progressive stability, where you have less pressure at the tips allowing them to collapse first. This can lead to pilots thinking it will collapse a lot, but in my experience this just isn’t true. I had hardly any tip tucks at all; instead you feel any loss of pressure easily through the brakes and react. I’m no test pilot but in the induced collapses I made the wing didn’t feel aggressive and it was easy to hold direction with counter weightshift. Big ears are easy to pull and don’t flap around. Once released they roll out on their own. The precise handling makes spirals and wingovers great fun and you can easily control the rate of descent and bleed the energy on exit. 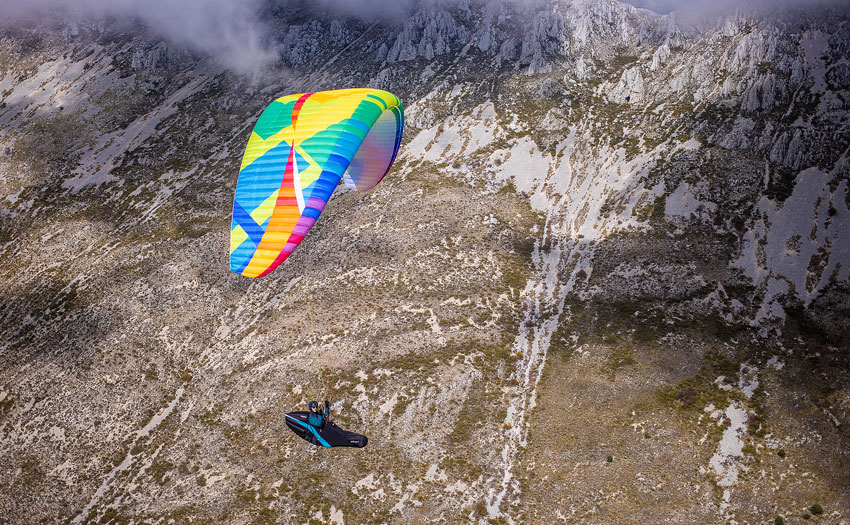 A high-B that is comfortable to fly, accessible and has all the latest technology, including B/C-control. It’s a cross-country machine

If you are looking to move up from a low or mid-B the Base 2 would make a great choice. It won’t put too much extra demand on you in terms of flying and at the same time you will be able to get to feel the finer control on offer. The B/C-control system gives you most of the feel you will get on higher-level wings and you can get used to this method of control, confident that you can translate this knowledge as you step up. You will quickly find yourself naturally wanting to use the rear risers when not thermalling.

If you are moving down from a higher class the Base 2 will give you a lot of control, good performance, EN-B passive safety and a relaxed nature. In short this is a wing that combines experience, the latest computer modelling and carefully-crafted handling and it shows. I am sure we will see this wing showing up on the online cross-country leagues once things open up again.