Apco are introducing two new concepts to the market this year: Flow-aligned ribs and a hybrid paraglider that is half-standard / half-single-skin. Designer Jonathan Cohn explained more

Tell us about flow-aligned ribs first
It’s pretty straightforward. It doesn’t matter if it is a paramotor or free-flying, but when a glider is gliding down its glide-path, the glide-path is not parallel to the shape of the wing. On the tips the glide angle forces the air in a direction that is not parallel to the ribs. So in reality what happens is the air is crossing from one rib to the other diagonally. The airflow over the rib is far from being optimal with regards to lift and drag. So facing the ribs in the direction of glide is a very simple way of optimising the flow over the tips. 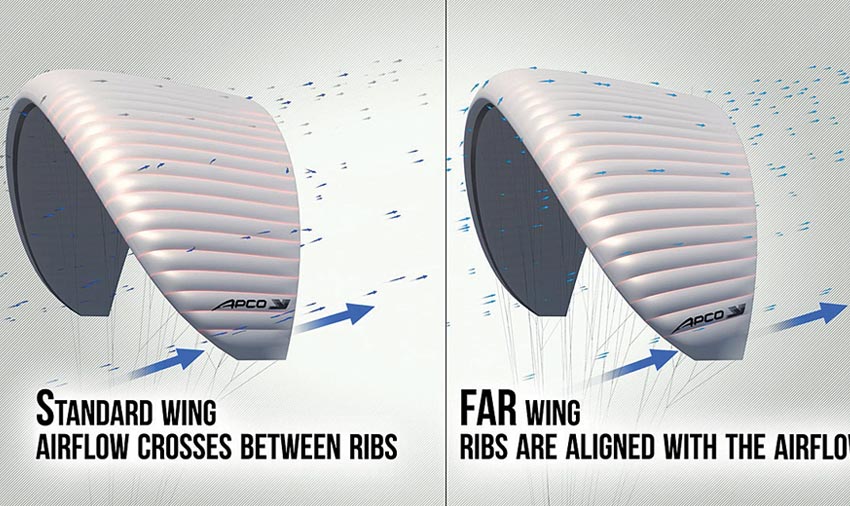 Has it been tried before?
I have seen some comments that yes it has been tried, but I am not aware of any wings that have this on them. Our new Thrust 5 paramotor wing has this feature, and we hope to include it on our new hybrid wing too. After that we think we will include it on all our wings.

What’s the benefit for performance?
There is an increase in glide. It comes from less drag and a bit more lift on the tips. It allows us to flatten the curvature of the wing a little bit, so you get more lift towards the ‘up’ direction. If all the lift is 90-degrees from the surface of the glider if you have more lift on the tips then you get more tension, the glider is more rigid. This allows you to reduce the curvature, creating more lift upwards, not sideways. So you get a better glide. In comparative tests we see that it is better, there is no number but it’s better. There are no downsides.

You mentioned a new hybrid glider. Hybrid of what?
The front part is like a standard paraglider with cells, internal diagonals and a regular amount of line, and the rear part is a single skin. You connect them together and you have the hybrid. The panels go from front to back like a regular paraglider. The cells close in the middle of the chord. 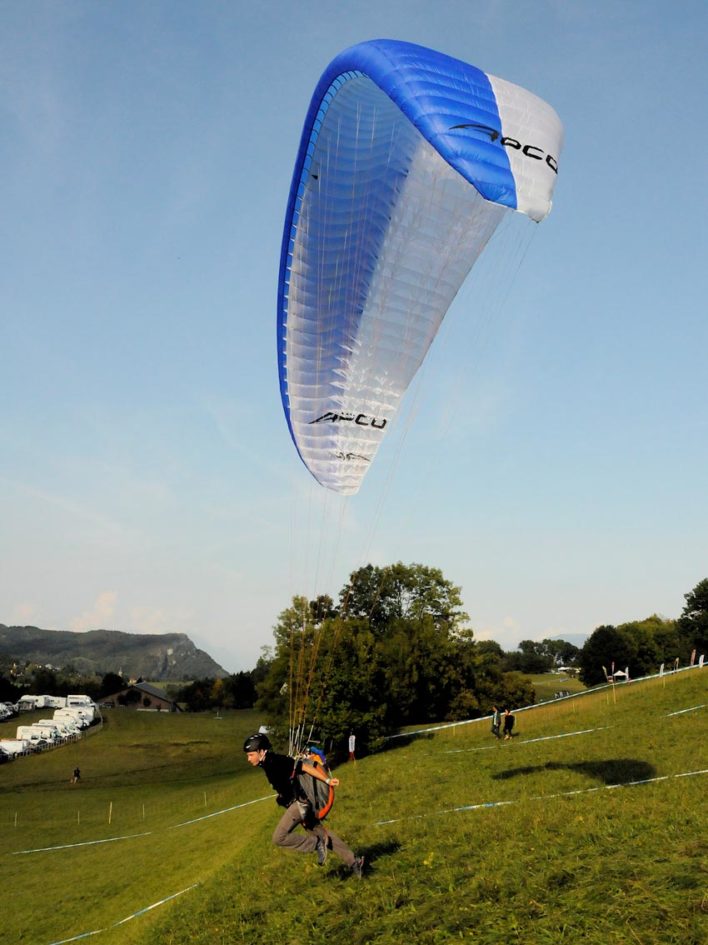 It sounds a bit weird! What are the benefits of this hybrid wing over a single-skin wing?
Performance. It’s much, much better. Brake pressure is much less but it’s still linear. You can feel the point of turn very well. It’s not too delicate. There is also more inertia so you can cut through the air, you don’t feel like a leaf being blown around. It’s a lighter glider, very easy to inflate, and general flight characteristics are much closer to a regular glider.

Who is it for?
We will make a light version for mountain flying, under 3kg, and a regular version for paramotoring and regular free flying.

It’s for paramotoring too?
We have been really quite surprised by the performance. It is showing really special characteristics and will be something special for both paramotoring and beginner and intermediate free-flight wings.

What sort of characteristics?
Stability on both pitch and roll is unbelievable, something we have never encountered. This is important for paramotoring because there is the issue of roll instability due to the engine. But also pitch stability is incredible. We have never seen anything like it.

What do you mean incredible?
For pitch stability the theory is it’s because the wing has the characteristics of a reflex profile. Because on the bottom it has a returning curvature, the profile is very pitch positive, stable. So it is always trying to lift up the leading edge and not rotating it down. When you inflate the glider it comes up and stops, it doesn’t overshoot, there is no need to brake it. It’s the same feeling in the air.
On roll stability, and this is our theory, we don’t fully understand why, but we think it is because the external ribs create a lot of drag when you are rolling the glider. This drag stops the roll on the spot. We have never felt anything like it.

Will you certify it?
The glider is based on an EN B planform in terms of aspect ratio and planform. Safety will be either EN A or low EN B. There is not a lot of air inside so there is much less inertia, so in general it is very safe and not aggressive.

Speed?
The same speed as an EN A. But that’s good for mountain flyers and beginners because of the low take-off speed. 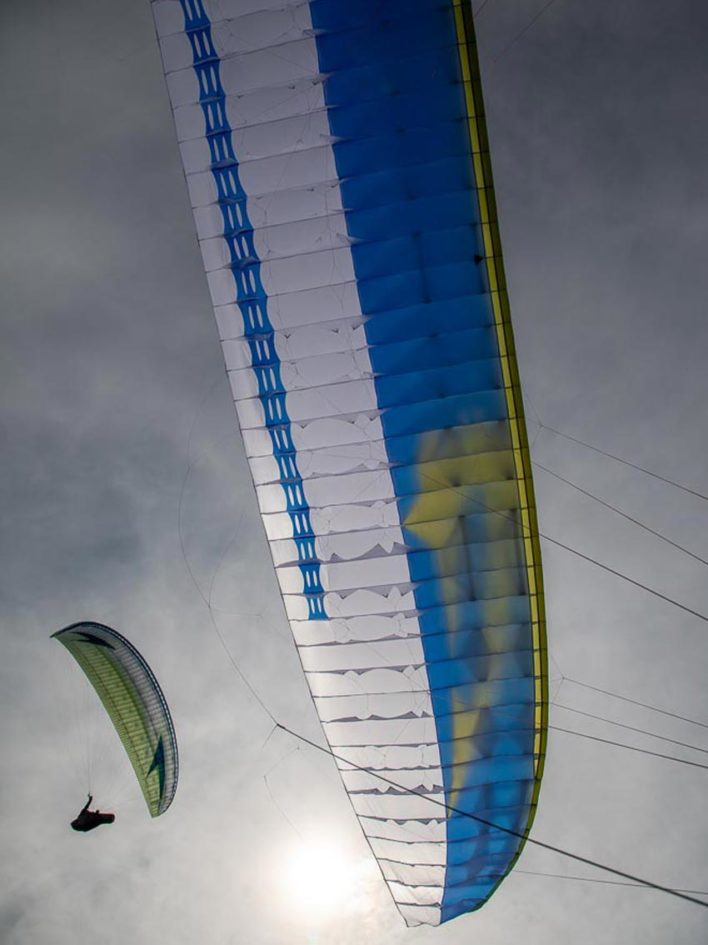 Looking up at the Hybrid from the pilot’s harness. Photo: Marcus King

How did you come up with this idea?
We look outside the box! To be honest I have no idea. It was a concept. But it has surprised us on all fronts. It’s exciting. Hopefully we will have it ready for February or March. Local pilots who have flown this wing come down and have been really shocked. They say “I’ve never felt anything like this, it’s really special and unique.”

Jonathan Cohn is a qualified engineer and designer with Apco Aviation. Founded in 1982 by Anatoly Cohn, Apco has been designing paragliders since 1986