The F1 is for experienced pilots who want to compete or fly long distance XCs or triangles. Photos: Gareth Bird / Apco
Paramotoring, Reviews

Apco have named this glider the Fast One, so like most paramotor pilots would be, I was pretty keen to try the glider and see if it lives up to the name as I’m a sucker for faster gliders.

After talking to the designer, Adam Wechsler, briefly last year in September at the Coupe Icare in France, it was clear that Apco’s main design priorities of the glider were “safety, stability and speed”. Don’t get me wrong, this is not a beginner glider. Apco say it’s aimed at classic cross-country competition pilots or more experienced leisure pilots who want a fast and stable wing to cover lots of ground.

The F1 has a flat aspect ratio of 6.6, which is on the high side for paramotor wings. That means it does need a pilot with more finesse and understanding on the controls than your standard lower-aspect ratio wing.

The glider has a reflex profile and has the ability to use trimmers and speed bar separately (good for XC cruising), or combined in a PK type system Apco call One Action Acceleration, OAA for short. (Apco have made a good video explaining how this works, see: tinyurl.com/apcosystem). 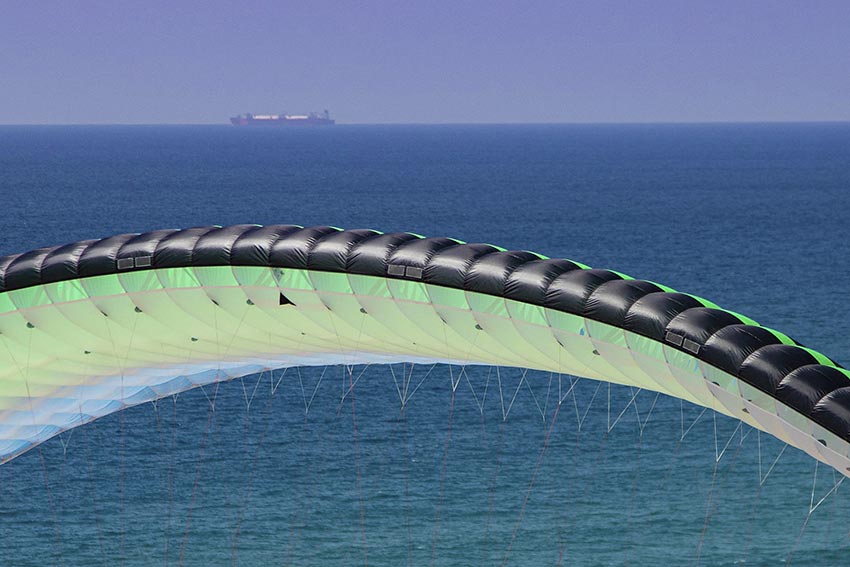 The glider also has embedded hook-in points to help reduce drag on the lower surface and HIT valves, which help pressurise the glider at lower angles of attack as the stagnation point moves up on the leading edge.

Unlike other manufacturers, Apco haven’t used a sharknose (or similar) leading edge as they say this doesn’t help reflex stability at speed. Instead they have opted for the more traditional leading edge with plastic reinforcements.

In terms of materials, the glider’s top surface is 42g ripstop nylon (double siliconised) and the lower surface is a lighter weight 27g material. The line plan is made up of a mix of Dyneema upper, unsheathed Vectran mid-tier and Kevlar lower lines.

For the review I decided to grab the 18m² as I wanted to see what the fastest possible speed was within the given size choices. A 20m2 and 22m2 are also available for heavier pilots, or those who look for a little more efficiency. For those interested (and you should be if you are wanting to compare speeds as I’m sure you are) my all-up weight during the testing was 105kg, giving me a wing loading of 5.83kg/m². 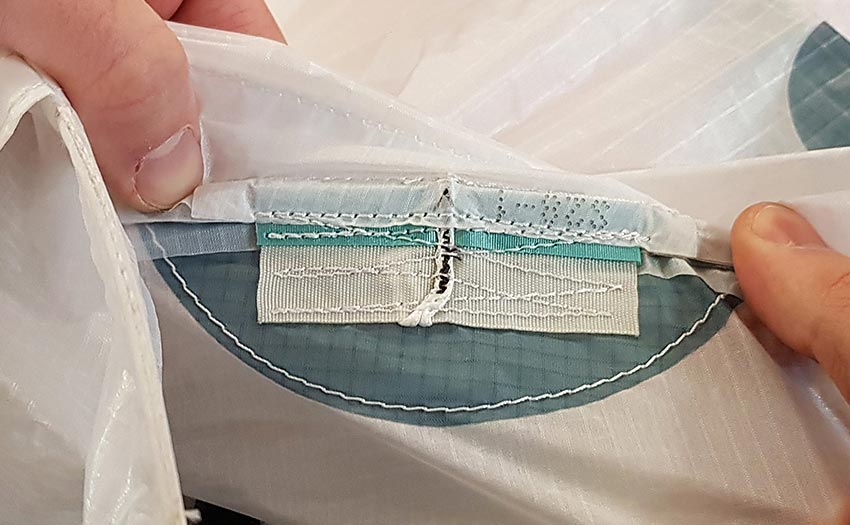 The glider feels like quite a lightweight wing on the ground. It launches very easily when forward launching in light to nil wind using the central As, as you do with most gliders, and requires no special techniques: it pops straight up.

On occasion it needs slight pilot input to stop over-flying but nothing an experienced pilot wouldn’t be able to handle easily. In stronger wind of more than about 17km/h, it does need a little more management to keep the span under control as the glider really wants to fly!

To give me a better idea across different loadings I tested the glider both with and without the paramotor, and the glider was indeed quite different. When lighter-loaded for free flying the F1 was still fast. In fact this was the first thing I noticed. Even with a brisk 25-35km/h breeze, with just me and a lightweight harness, the glider penetrated easily while trimmed fully slow.

I noticed the brake fan was biased towards the glider’s wingtips, which seems to give it quite firm brake pressure even when trimmed in. The brake pressure increases linearly so you get a good amount of feedback throughout the range, which also makes the glider feel quite responsive to your controls when damping any surges or alike.

When adding the motor, and therefore an extra 30kg or so, (I use the Parajet Maverick with Moster for review), the glider comes into its element. The extra loading makes the whole span feel not just more solid but more cohesive too.

With regards to speed, after many test runs with the Flymaster TAS airspeed probe, I measured trim speed at 45km/h (trims fully closed and hands up). Adding full speed bar to this configuration gave me an airspeed of 62km/h. Fully released trimmers and full speed bar got me up to around 72km/h. Although I couldn’t get the claimed 80km/h at full speed the whole unit felt really solid and reassuring at full speed.

When moving back to the full slow configuration for the economy testing, the glider did move around a little more in the turbulent air, however I would expect this for a glider with aspect ratio of 6.6. Just moving the trims to the blue stitched mark on the risers made the whole profile tighten up. 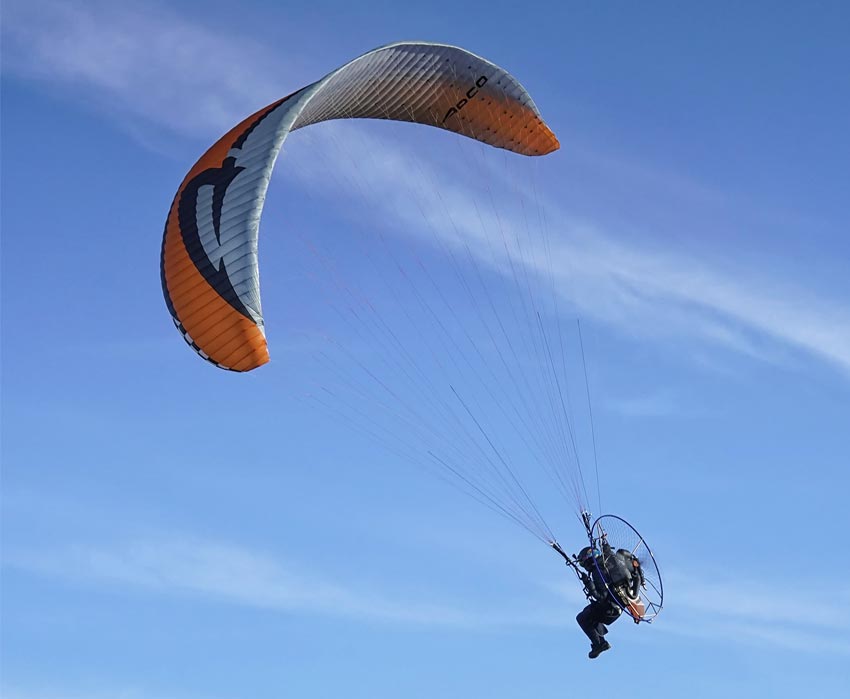 When flying with the trimmers released the tip-steering worked really well; the toggles for this are easily accessible from magnetic stops on the risers. I really liked having the option of the OAA system: for calm evenings hedge-hopping it was great to have full speed-range but be able to come back to trim speed easily if wanted or needed. Similarly, when cruising it was nice to lock this off and just have use of the trimmers.

In terms of economy, as mentioned previously, I flew the 18m2 glider at 105kg and was using the Parajet Maverick with the Moster 185 engine. With trims in full slow configuration I was getting 3.75 litres per hour fuel burn in mildly turbulent air. Unfortunately, being UK winter, I wasn’t able to test it in decent thermals to see how it behaved.

If not cruising and just having a local flight from your field, the glider is also surprisingly playful given that it’s aimed at efficient cross-country flying. I found that the glider was best trimmed to the blue mark on the risers as this stiffened the sail slightly but gave a nice increase in speed to help make some good carving turns with better authority from the brakes. 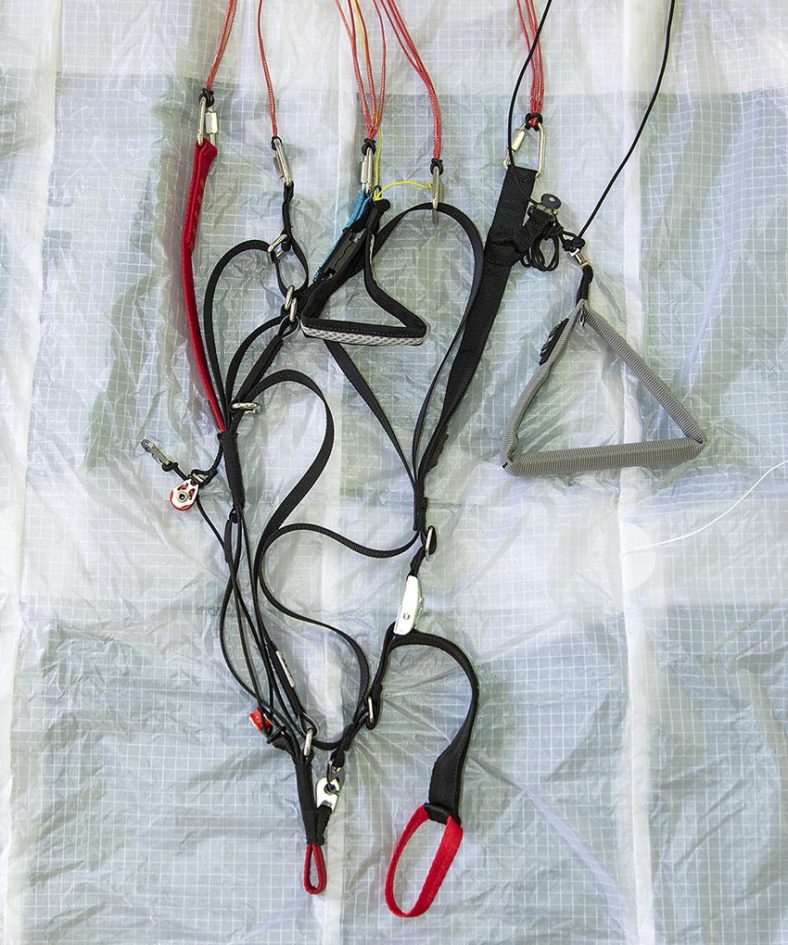 I think Apco have achieved exactly what they wanted to with this glider: a fast and stable profile able to cover a lot of ground, while not being too stressful for the pilot. I really enjoyed its super-easy launch characteristics and its stability at speed and the different options you had to access this speed (OAA or standard set-up)

Your stated aim was to design the “best performing high-end XC wing on the market”, which is a pretty exciting design aim to have. How do you approach that as a designer? Did you work from a previous model, or start from scratch?

The F1 was built from scratch. The objective was to achieve maximum usable speed without sacrificing safety. We combined all our previous know-how and were confident we have the means to create a package that delivers the stated aim.

What are you proudest about in the finished wing?

The rigidity of the canopy. There is very little movement of the canopy despite the high aspect ratio, which for a paramotor wing is the optimal behaviour. In free flying wings, too much rigidity in a canopy can be interpreted as lack of feedback, but for paramotor use it’s a good thing.

The wing is for advanced pilots. For pilots new to this class of glider, but keen to get on one, what would you advise? How best to approach it?

For its class it is not a hard glider to handle. Take it slow in the beginning and get familiar with the wing, don’t push too hard too fast as this is what can happen when flying a fun and confidence inspiring wing! Be aware that the higher speeds and increased inertia inherently carry additional safety concerns.

And for pilots experienced in this class of wing, how do you recommend they get the best out of it?

Use the speed bar with the OAA (One Action Acceleration) system on! Learn to control the wing in the same way as experienced paragliding pilots do using the speed bar, controlling pitch.

We are always surprised by how many paramotor pilots do not use the speed bar, which can be safer than using trimmers.

In the video for the wing online you are flying the Universal Paramotor Pod PPG harness from Apco. Is there any specific wing/harness you recommend?

The universal pod fits almost all paramotors on the market and is a great add-on. There is no specific recommended combination of harness with the F1, but adding the Pod certainly gives an additional level of aerodynamics and comfort for XC flying.

It’s a fast wing. How did you achieve that, while managing to keep a stable, safe glider?

Thank you! We have been producing reflex paramotor wings for many years. Our long-time research regarding various reflex profiles showed us the way. The profile choice in conjunction with several other different design aspects delivered the F1 as a package.

Lawrie has been flying since 2009 and is a qualified paragliding and paramotoring instructor as well as competition and XC pilot. Equally at home flying the latest CCC glider or an EN B, his paramotoring set-up is a Parajet Maverick Moster.