Stephan Stiegler and his AirDesign team have become well known for producing light and fun wings that break the mould. The AirDesign Susi hike-and-fly wing has a number of uses from fast fun mountain wing to coastal soaring, and the single-surface UFO has been used in setting records for hike-and-fly. AirDesign have also made light versions of their EN-A wing the Eazy and their B wing, the Vita.

When it comes to the EN-C class the team decided to make a single version of the wing, but to aim for the best combination of performance, light construction and durability.

The Volt 3 arrived in a very small box at my office. I had warned reception not to pick up the parcel that was coming for me, but instead one of them carried it up under one arm and left it under my desk. I was even more surprised when I got home and discovered that the box was only half full. The wing comes in AirDesign’s AirPack 50/50 concertina bag. It is a very light and stretchy bag, which allows even the slightly less fastidious pilot (me) to pack the wing down to a small size.

Apart from the size, the small Volt 3 only weighs 3.85kg so is a real dream for people who like to fly XC but whose best XC sites involve a steep walk up, especially when trying to keep up with Cross Country’s Charlie King, a trail runner, on our way up to our XC take-off at Fourneuby in France. 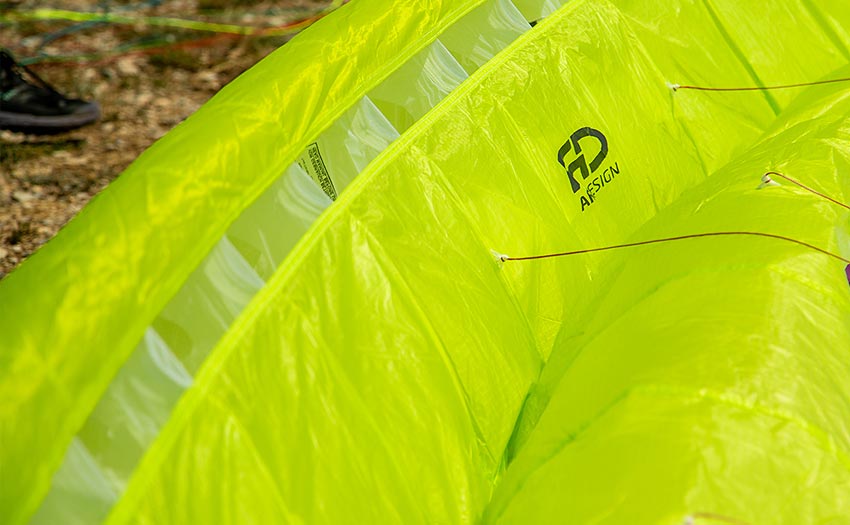 After a few weeks out of action due to other sporting commitments I was a little nervous to be flying the wing in strong winds and thermals. The spec. sheet sounded a little daunting, with quite a high flat aspect ratio of 6.5. Add to that the lightweight construction and lines and I imagined quite a shaky, fluttering wing would soon be flexing and wriggling above my head.

On take-off the lines were easy to organise and any slight knots that had developed in transport were easy to shake out. The lines are all red Edelrid apart from the yellow brake lines. The 13mm risers and large brake handles were reassuringly easy to use. There is nothing too specialist feeling, just normal press-stud brakes and clean, colour-coded risers.

Between the B and C risers there is a green section of material, which is used as a C-riser control. (On three-liners only using the Cs to rear-riser control can reduce the efficiency of the wing overall.) There are only two A-lines and overall the line layout is simple and efficient. 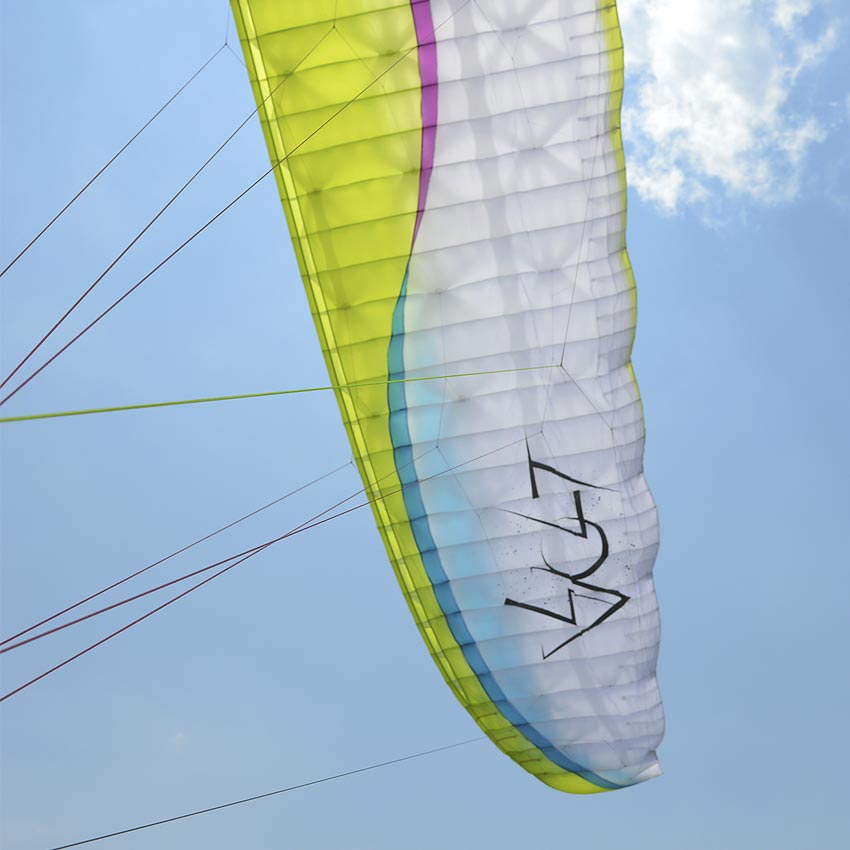 Porcher Skytex 27 is used on the bottom surface

Looking at the wing on launch it is a sleek and efficient-looking wing. The main design points that are obvious are the wingtips and the light cloth. Managing wing vortices is important in any wing design, from airliners to our own wings. AirDesign use a slightly turned-up wingtip and small, circular, vents to disrupt the vortices and reduce their size.

The cloth – Dominico 20 on the top surface and Porcher Skytex 27 on the bottom – feels light but durable. There were only a couple of places where light material looked a little exposed to friction from rods, for example, near the wingtip. This was only a minor point though, as overall the balance of materials appears to be just right.

Like other manufacturers AirDesign use 3D-shaping to optimise the shape of their cell panels. The overall look is clean without too much reliance on heavy internal reinforcement of span-wise members.

The wing has 59 cells and a sharknose design. Normally, my groundhandling gets shown up at this point but the Volt 3 was incredibly easy to inflate and to manage whether using standard cross-brake rear launch or rear-riser control. The wing can overshoot but the standard brake length with a half-wrap was perfect to keep the wing on the ground. The wing didn’t require too much footwork to stabilise and could be brought back using harness and brakes on their own. 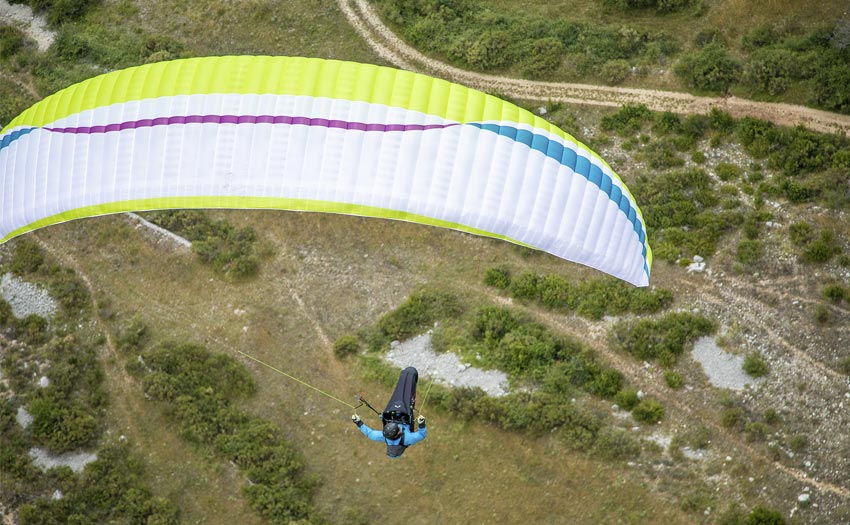 Handling and level of feedback is class-leading, while feel is reassuring and fun. Photo: Marcus King

Once in the air the immediate feeling was of comfort. Not comfort in the numb, sensory deprivation way that some wings can have. The pitch is well damped, but informative. I have flown a few sharknose wings where collapses come as a very occasional and violent surprise. I prefer a warning. The Volt 3 definitely gives the ambitious and diehard XC pilot enough information but at the same time won’t overwhelm a pilot stepping up from an EN-B.

Turn response is excellent. The brakes are light to medium in weight and as I was near the top of the weight range the agility was really fantastic for such a high-aspect wing. There was very little span-wise flexing and rustling going on, so rather than feeling I was on some sort of high-end experimental light wing, I immediately felt at home.

As ever when we have a review wing, we don’t get to be too selective of our flying conditions, so I went out on a windy thermic day and also a strange scratchy day with a threat of thunderstorms. On the windy day the wing behaved impeccably on launch and despite some nasty broken thermals I only got one major frontal collapse. I simply went into the neutral position and waited for the wing to inflate as it shot forward. It inflated progressively and I was able to catch the dive easily. 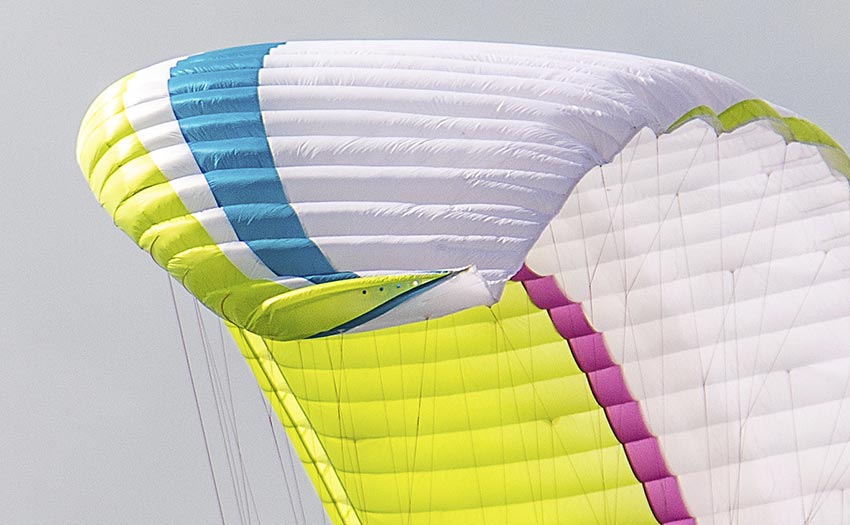 On the day with lighter conditions and smaller, tight thermals the wing gave good feedback about the air and I was able to alternate between efficient turns and hooligan mode. The wing really is very controllable in roll. As a C you do have to fly actively of course and to manage the outer wing, but not to the extent of say a Gradient Aspen 6 or even the Advance Iota 2.

I was flying with Cross Country’s Marcus King who was on a high-B but otherwise, thanks to the weather, we didn’t have many wings to compare against. However, the climb-rate of the Volt 3 and feedback made me feel that it will be a fantastic climbing tool. The wing stabilises nicely but the angle of bank can be changed quickly depending on the type of lift you find yourself rocketing upward in. 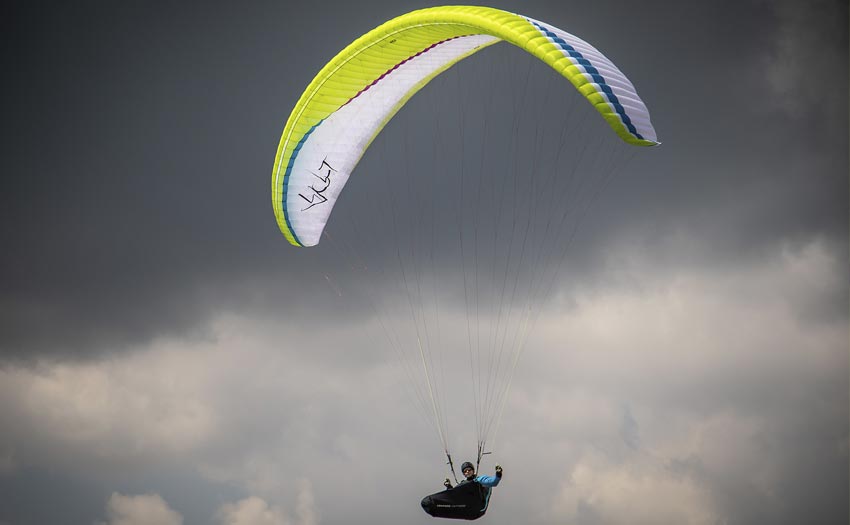 A three-liner with an aspect ratio of 6.5 the glider is firmly in the C class and is for XC pilots

At speed the wing felt very stable. The rear-steering strap took a bit of getting used to, but for directional control and the mild damping I was doing I could appreciate the control was working. It is obvious that the C and B were being pressurised and used together. The wing certainly looked efficient with no obvious break in the profile.

I am used to flying wings that incorporate complex trailing edge brake gatherers and aim for a clean-looking trailing edge, even under braking. The Volt 3 is very straightforward in terms of trailing-edge design and therefore has quite a billowed or corrugated trailing edge. It definitely works and the turns are lovely, but it didn’t look very sleek, especially in comparison to the rest of the wing.

Big ears deserve a special mention in the user manual. There are only two A-lines, so big ears are the only ears possible! Rather than grab them one by one the best approach seems to be to pull both at once and, once stabilised, add some speedbar to maintain speed and angle of attack. If there is some flapping then the manual recommends using more of the line and even the stabilo. The descent rate is great at 3-5m/s. However, to get down I think I prefer spirals! Talking of which, the wing takes a little persuasion to go into a spiral but once in is easy to modulate. There is plenty of energy on exit and a surge as you might expect.

Really I came to the Volt 3 a little concerned that the wing would be too specialist or demanding for the mid-C market. However, once I had a few hours under it I could tell that it is firmly in the middle of EN C in terms of pilot ability.

The wing offers some compelling selling points against rivals in the C class and upper B class. Some of these advantages are on the spec sheet, but for me the most important was the reassuring but fun feeling I had in flight. The handling and level of feedback is class-leading, in my view.

From those stepping up it will be easy to launch and fly on the first few forays into thermals. For ambitious XC pilots, benchmarking against other C wings, the record of the previous Volt in the XContest has been excellent.

The low weight and pack size were also a real winner for me and I could see myself exploring new sites, even if there was a long walk-up. The wing also passed the test at the local pilots’ bar as everyone who saw me fly said it was a beautiful looking wing.

If you are hesitating between a bleeding-edge upper EN B and the step up to EN C, I’d definitely recommend a test flight on the Volt 3.

Brian Steele has been flying for 20 years. Brought up on hike-and-fly in the hills of Scotland he migrated to the southern French Alps a decade ago, where he regularly enjoys flying alpine XC on EN B+ / C wings. His other passion is road-biking.