The Vivo is the new low-B in the AirDesign range, replacing the Vita 2. With more cells and a slightly higher aspect ratio it’s aimed at new pilots, or those on their first EN-B wing Photo: Marcus King
EN-B, Reviews

Charlie King flies the new low-EN B from AirDesign

The Vivo is AirDesign’s latest wing. They call it their “freerider” and it’s an entry-level EN-B suitable for pilots stepping up from A-class wings. It is now DGAC approved for paramotor use too.

It has a very good EN test report (mostly As) and praise on their website from AirDesign team pilot Claudius Lopez-Diaz who borrowed one at a testival and flew a 190km triangle flight on it, proving it has plenty of performance.

AirDesign promote the Vivo as “possibly the only wing you will ever need” and with these credentials I can see what they mean. I loved the Vita 2 SuperLight which I flew a couple of years ago and I was very keen to try the Vivo, to see if it lived up to my now high expectations of it.

The specs tables reveal the differences to some extent: the Vivo has more cells (49, like the Rise 3, vs 43 for the Vita 2), which means a cleaner shape and associated performance gains. It also has a higher flat aspect ratio (5.48 against the Vita 2’s 5.34, but less than the Rise 3’s 5.95). Its flicked-up wingtips, “like on modern planes”, are called ‘stabilo winglets’ and, AirDesign say, they increase the projected aspect ratio, improve performance and also make it more roll stable. Like other AirDesign wings the Vivo has the vortex holes – little holes near the wingtips to reduce the wingtip vortices – and AD’s very thin ‘Razor-Edge’ trailing edge: “The profile runs out very smoothly and cleanly thereby improving performance”, they explain.

It has a sharknose, with soft and squashable reinforcements, though the Vivo is delivered with AD’s 50/50 Airpack so it’s easy to concertina pack it for better protection. The 50/50 is a half-length lightweight concertina-packing bag, which saves a few grams but takes a little practise to be able to neatly fold the wing in.

AirDesign no longer make standard and superlight versions of their entire range of wings.  “It depends on the wing”, they say. “On performance wings, where light materials have become the standard, there is no need for a standard version any more; for others like the Eazy we still offer both versions as the use of this wing is quite different, from school to anything else.”

AD have two low-Bs: the super-light Susi, and the Vivo, which complement each other. The Vivo has a lightweight construction and is made from Dokdo 20D on top and Porcher Skytex 27 underneath, a combination that AD say means low weight but good durability. It’s 3.9kg in the XS, which is midway between the weights of the standard and superlight Vita 2 (4.3kg and 3.3kg).

The 13mm ‘performance’ risers are colour-coded – red on the split-As, with the Big-Ears riser clearly marked ‘EARS’. The risers are neat and tidy, finished off with plastic inserts inside the line/riser maillons, with lightly padded brake handles with popper keepers. It has a C control system and durable, easy to manage colour-coded sheathed lines. 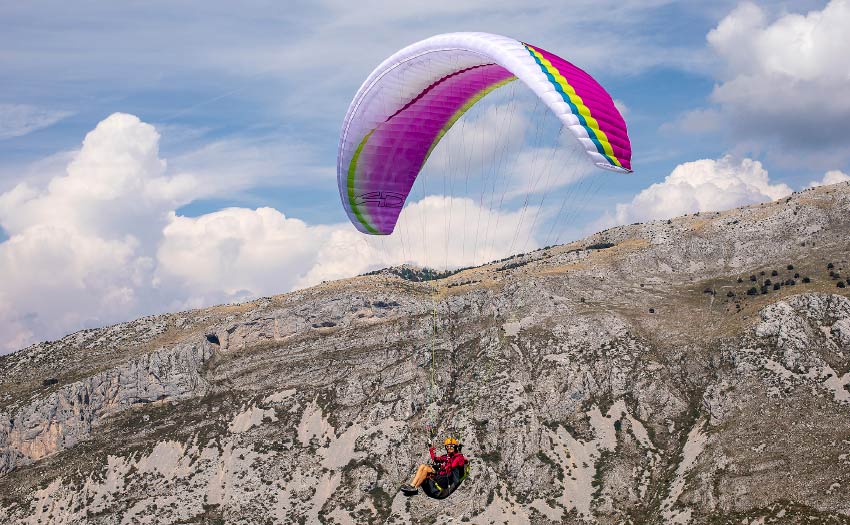 “Agile but not nervous” was the design brief for the Vivo. It has direct steering and it’s easy to feel where the thermals are Photo: Marcus King

One of this glider’s greatest strengths is its absolute simplicity of launch. It just doesn’t get much easier. In a range of conditions from hike-and-fly forward launches, to light-wind reverse launches and also in windier conditions, every launch was drama-free. It is very confidence inspiring and forgiving of sloppy technique.

The wing rises smoothly and easily, and although it does need a dab on the brakes to stop it from overflying, it gives you plenty of time to do it. It’s a lovely laid-back launcher, and you feel there’s no rush, no stress (not from the wing anyway; trying to dash onto and off the carpet between the tandem pilots at Annecy in high season is another matter).

The first thing I noticed in the air was that the brake pressure was higher than on the Vita 2 SL, and also I felt the need to be more positive with my inputs to initiate turns. On reflection I think my expectations were wrong: the Vivo isn’t trying to be a superlight wing that you can ‘think’ around the sky – it’s an entry-level EN-B aimed at new pilots and beyond. AirDesign say some people found the Vita 2 SL to be too nervous, and with the Vivo they have tried to balance the handling to be agile but not nervous.

And I think they’ve done it. In thermals the steering is direct, it’s easy to feel where the air is lifting and to control the angle of bank. The wing is very pitch-stable and feels solid and settled. Occasionally I’d hit a strong bullet of a thermal and feel like the wing was being knocked back momentarily, but then it would rock in and carry on climbing. I didn’t have a single collapse, not even a wingtip flutter.

Initially I flew the Vivo without ballast at 70kg, which is just above the middle of the weight range. I wondered whether it would feel different with an extra 5kg so I loaded up to 75kg, just 3kg below the top of the weight range, and I did think it seemed more responsive, although it’s very hard to objectively compare flights on different days in different air.

I later asked AirDesign’s designer Stephan Stiegler where in the weight range he’d recommend the wing be flown, and he said that it’s not very sensitive to loading, so around the middle is good. “On top end the brake pressure gets a bit harder but nothing else changes much.”

He added that with the smallest size, the XXS, they gave it an extended weight range with hike-and-fly in mind. It’s 19.3m2 and certified from 50kg to 65kg, but can be extended to 72kg to give more speed and agility and a smaller, lighter package to hike with.

In terms of speed my overall feelings were that it’s as I’d expect for an entry-level B, neither fast nor slow. My speed probe measurements when flying at 75kg were 34km/h hands-up, and 42km/h pulley-to-pulley, which is similar (very slightly slower hands-up, same top speed) to my measurements on the Gin Atlas 2. As mentioned, big ears have their own very clearly labelled riser, and they are very easy to pull in, with no flapping or unsettling of the wing. They stay in on their own for a few seconds, but then roll out again.

Interestingly, a group of visiting pilots from a club were on our local site recently, and we joked they were Team AirDesign as a lot of the pilots were flying Eazys. One pilot was testing the Vivo having come from an Eazy, and he said he was very happy with it, and that it felt noticeably faster than his Eazy. He was thinking of stepping up to it and I think he’ll be happy.

It feels like the ideal low-B: not taxing to launch or fly, good safety report and in my experience little tendency to tuck or deform even in snotty air. I think it’s possible some pilots will miss the ‘nervousness’ that has been bred out of it, but its performance abilities have already been proven. For weekend pilots and those who like their flying to be relaxing, it may indeed be the only wing they’ll ever need.