There is a real 'Wow' feeling you experience after flying this glider. The performance throughout the high-B class just gets better and better. Photo: AD
EN-B, Reviews

They call it the #thermalmonkey for a reason – this glider can climb! But more than that, there’s an attitude to this wing that will speak to any pilot who wants more than just miles out of their everyday flying. Ed Ewing jumps onboard the soul train.

The Rise 4 is the high-B in AirDesign’s fleet of wings, sitting above the Vivo (EN B) and below the Volt 3 (EN C). It was released at the beginning of this year, and replaces the Rise 3, which was three years old.

The high-B segment is a crowded market but an important one. As AirDesign point out in the glider’s manual, “The B+ market is established and proven. It’s the most prominent category because the majority of experienced pilots now choose to remain on B+ wings because the performance characteristics are becoming so incredible.”

Choosing a glider in this category then comes down to, “flying a glider that suits your style, feels the way you want, responds the way you love.” They call it “glider soul”. So this review is all about that – the search for soul. Just my cup of tea. 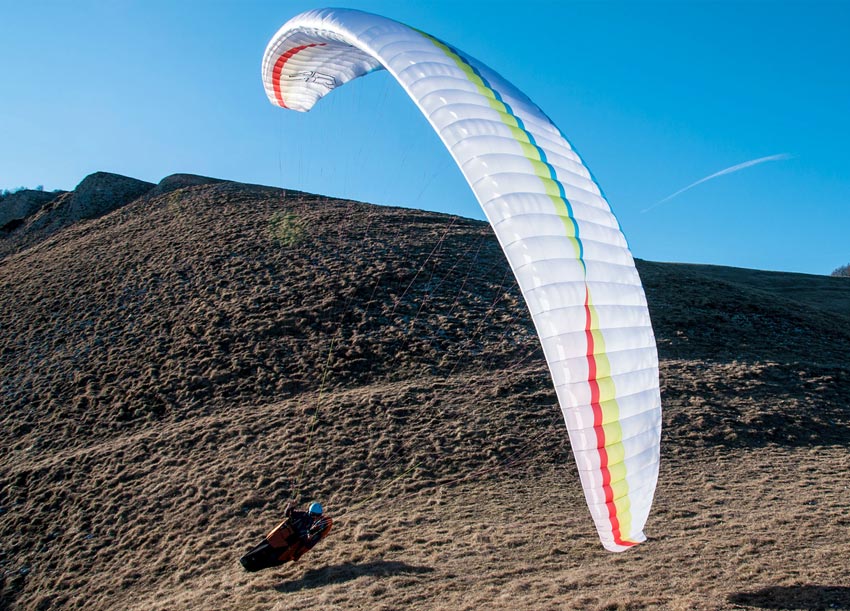 The Soar is the lightweight version of the Rise 4. It is made of 27g Porcher throughout, features bootlace risers and is 700-800g lighter than the Rise 4, depending on size. Both gliders have the same aspect ratio and cell count. Photo: AD

I picked up the glider from the AirDesign office in Austria after the Stubai Cup in mid-March. It then sat in the cupboard for weeks as Europe went into lockdown. On a sunny spring day ahead of the great unlocking I got it out to check it out on the ground. 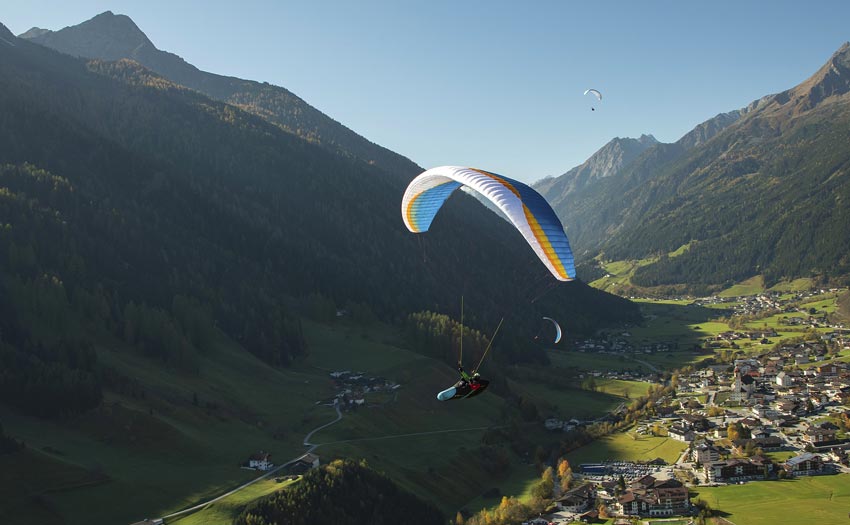 The Rise 4 will appeal to experienced pilots who want the security of flying a B, but who also want to have drive and usable performance when flying XC. Photo: AD

The first thing to strike me was the aspect ratio. At 5.92 this is about the same as the Rise 3, but significantly more than say, the Ozone Rush 5 (5.55), the BGD Punk (5.4), or the Mentor 6 (5.43) (all high B wings) and more in line with something like the Gin Explorer (EN B, A/R 6.1). Aspect ratio isn’t everything, I know, but it’s something, and typically the greater the aspect ratio, the greater the demands on the pilot.

The glider is light construction but not lightweight: the top sail is 35g Dokdo and the bottom is 27g Porcher. Lines are unsheathed, risers an easy-to-handle 13mm. There’s a sharknose, winglets, vortex holes, 3D shaping, mini-ribs, plastic rods in the nose, and funky soft brake handles. A B/C riser-steering set-up adds to the feel that this is a wing designed to go places. It’s a confident-looking wing built with XC flying in mind. There is a separate lightweight version, called The Soar.

A week after the great unlocking I was on launch on a sunny afternoon raring to go. A brisk wind meant a committed reverse launch, which went fine, and I was quickly in the air. My immediate impression was “Ok, this has some pace.” The glider was keen to fly, almost pulling me along to hurry up and get out front and climb. So that’s what I did, and didn’t stop for the next 90 minutes as I climbed up in the sea-breeze thermals, clipping their sharp edges, finding the cores, squeezing every metre out of them as we drifted over the back before pushing out front to do it all again. XC was not allowed, so it was an exercise in fine-tuning thermalling.

I found myself settling into a routine with a Brazilian pilot on a Zeno, and we both shared the same pace: push out, thermal up, drift back, push out again. We both stayed high all afternoon. After landing we chatted, and he quizzed me about the wing. “EN B? Wow! Ok. I thought it was some new EN D,” he said, surprised. I was too. The climb on the thing seemed to be very, very good and I couldn’t work out why. 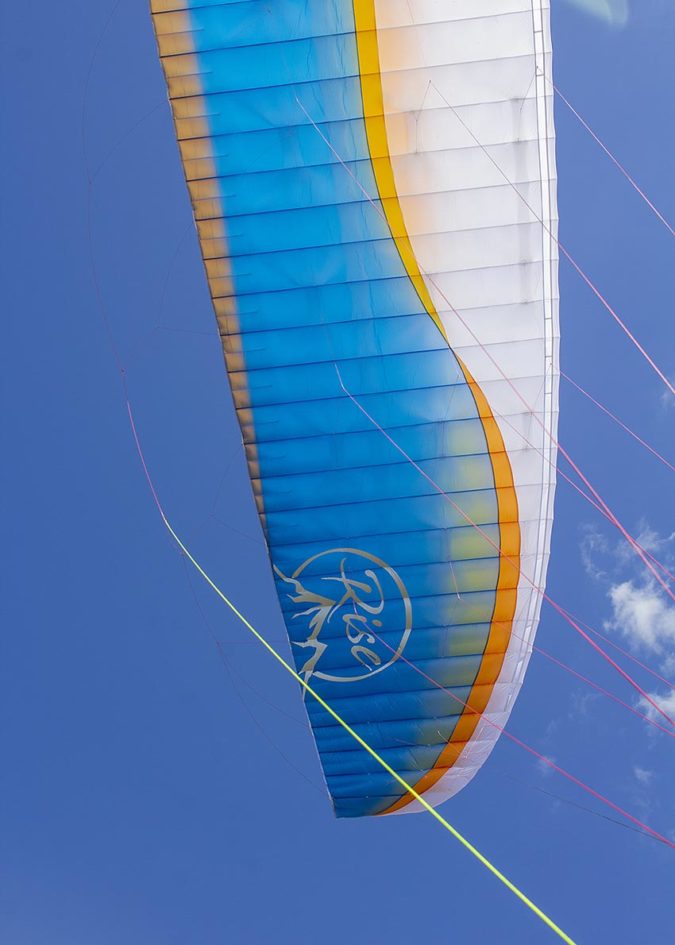 Keen to explore it more I took it out on a five-star day, with wind in the forecast. I had five hours in the air, just blitzing around the sky at altitude. The glider just loves to climb. Usually on the busy days I try to find my own thermal. This day, this wing, I was just diving into the gaggles out front and climbing out, sticking to the climbs as they morphed and drifted and shifted in the wind.

Again, the performance was noted on the ground, and a friend messaged me later to comment on it. “That new AirDesign Rise goes very well – you were in orbit for ages!” 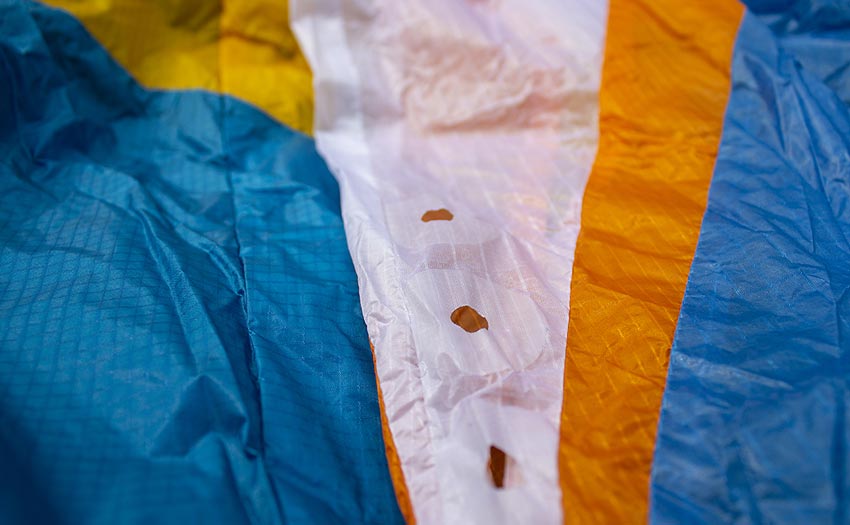 As well as the frankly brilliant climbing and coordination in thermals, I was impressed by the comfortable ride too. My five hours was split into three sessions, pushing back to top-land. On one landing I overheard pilots complaining about the rough conditions. Not me, not on this wing. I just flew the thing through all the chop. Yes, I knew it was windy and rough lower down in the climbs, but nothing that would have stopped me flying. Anyway, up high it was sweet, much less wind with consolidated 4m/s climbs!

So I was starting to like this Rise 4, with its groovy handles and its B/C riser-steering system and its dialled-in thermalling, the way it simply seemed to stick to the best air (I am not making this up!). I had explored big ears and speed bar, and found big ears to be fine – easy to put in, no oscillation like the old Rise 2 used to do – and was happy to scoot around on half-bar between climbs. In fact it liked it better like that, especially in the choppy air: everything tightened up and got more stable, with a bit more drive. I had one small side collapse and it was a non-issue, over before I knew it was in.

I’m not really a pulley-to-pulley kind of pilot, but I did it for you and got about 12km/h extra on my GPS, which seemed accessible and sensible. 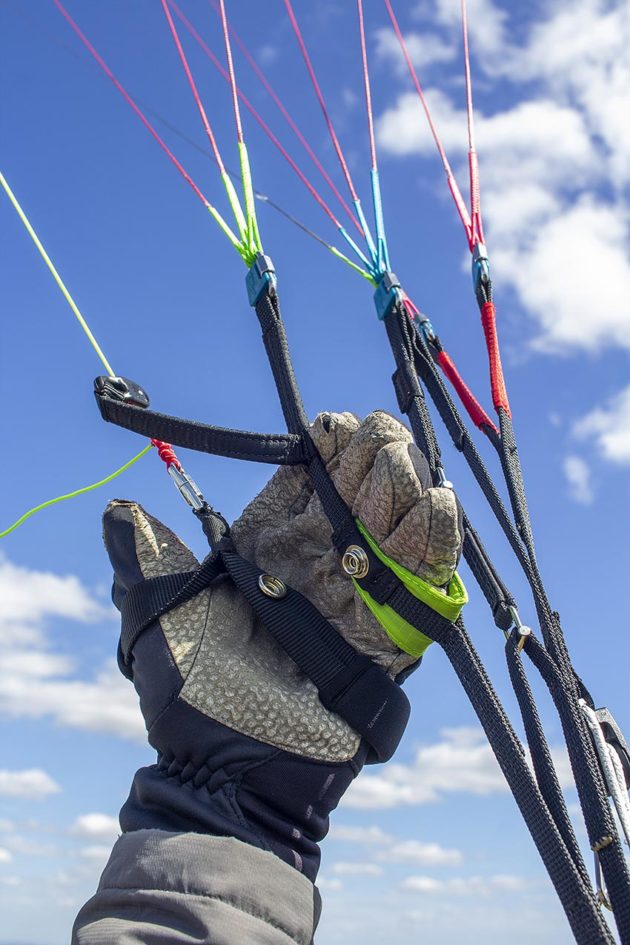 The B/C riser-control. Pull down on the C-riser and the B comes down too. Clean, simple and intuitive. Photo: EE

By now thoroughly addicted to this feeling of hanging out with the secret leader of the pack, it was time for XC. A double date, two five-star days in a row, presented itself, and so I went along for the ride.

Day one I bumped into UK team pilots Kirsty Cameron and Guy Anderson, and British Airways pilot Oli Sherratt who were planning an 80km flatland triangle out front. Would I like to join? Thinking it already looked windier than forecast I drew in a sharp breath, instinctively thinking I’d never get round on a high EN B, no matter how good. I chickened out and left them to it, all on their two-liners (two out of three managed it, but it took them six hours!), and instead went for the downwind-dash option.

That worked, and a quick 50km flight followed, with lots of big-earing away from cloud, and a fair bit of scratching hard to stay up in the mixing air near the coast. Back at launch in the evening I enjoyed another hour’s soaring and late thermalling. At one point everyone was grounded, waiting for the wind. Spotting a lightly circling bird I took off, nodded hello to it, and then climbed out in a light, light climb all the way to base, the only one in the air and the very last climb of the day. Confidence in a wing can do that: inspire you to just try. 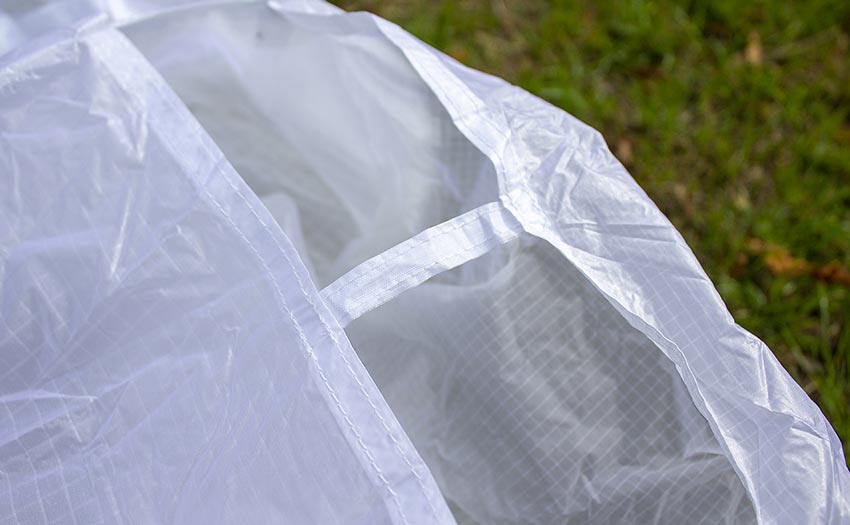 The next afternoon was as good as it gets in the UK flatlands, which is to say light winds, 4/ms climbs to 1,900m, working cloud streets and working ground sources. Not that it was easy to get up – my vario shows four 90-second flights before finally getting a climb at 2pm. Getting so high I could see the coast to the south of me, I set off in that direction, but decided to turn back when I saw that cloudbase was stepping lower and lower in front of me. Pushing back I then had the sky more or less to myself over the next three hours as I connected dots on a 50km triangle.

With every leg seemingly into wind (“This is like Piedrahita,” I found myself thinking) I spent a lot of time on half to three-quarters bar, picking my way slowly along, guiding the wing along using the rear risers. A three-cloud cloud street worked like a dream, as I pushed into wind, trying to get to the market town ahead of me. All this time the glider simply behaved itself, telling me what the air was doing and where the lift was.

Towards the end, as I had to climb yet again on the long push back to the ridge, I focused on climbing in the light stuff. Here, the wing worked best if you simply let go of the outer brake – no tension at all – and just guided the glider round with weightshift and a little bit of brake. She just found the lift, and around we went. Eventually landing back where I had taken off from I felt like a victorious returning hero. No one else seemed to notice! 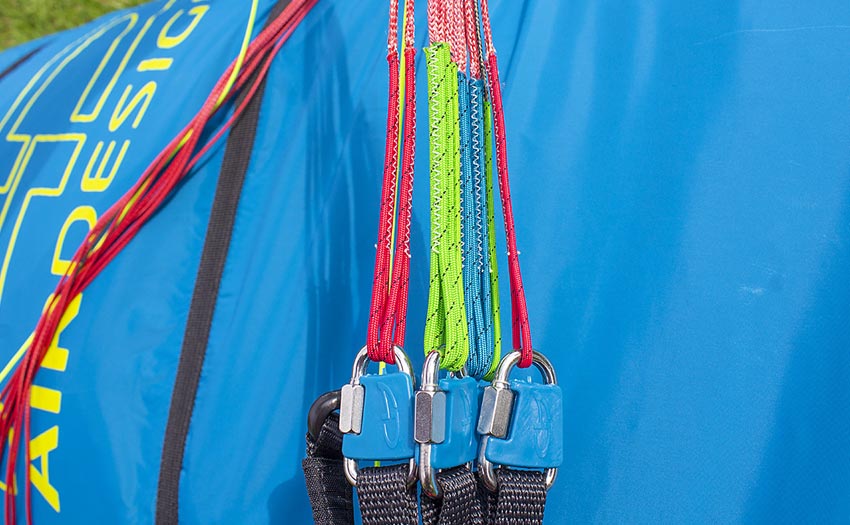 Colour-coded sheaths on the lower part of the lines make identifying them easy. The unsheathed lines are Edelrid aramid. Photo: EE

I asked AirDesign about the stickiness of the glider in thermals, and Martin Gostner, the CEO of the company, laughed and said: “To make the glider stick or climb that well is a speciality from Stephan. He has his own design and won’t tell anyone why they climb that well.” Stephan Stiegler is the designer, and was FAI Paragliding World Champion in 1995, so he knows his stuff. It’s no magic dust though, it’s experience and clever design. “The Rise 4 has soul built in,” AirDesign say in the glider’s manual. “It has the signature of the designer standing directly behind it.”

Having put some hours on the glider, somehow that description really fits. This is a glider with performance, safety and comfort all built in, but the secret ingredient, the one that makes it stick in my mind and my heart rate speed up when I think about it, is just that: soul. 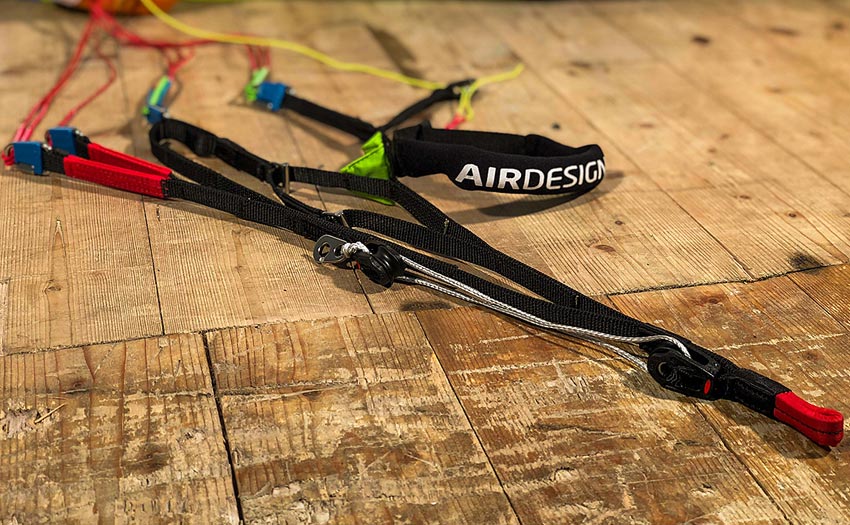 The riser set is simple and straightforward, with colour-coded As. Photo: EE

This review was published in Cross Country issue 214 (October 2020)