AirBuddy’s tiny chasecam is an unusual design with a small air brake in place of a shuttlecock. It’s folds down small for easy transport, but how does it perform? Marcus King tried it out.

Most of the chasecams on the market for paragliding use a shuttlecock design. AirBuddy have gone a different route. Made in Chamonix, France, the AirBuddy consists of a jointed carbon pole, much like a tent pole with elastic running through it to keep it together. It has a camera mount at one end and a relatively small ‘air brake’ at the other end. It all packs down extremely small and is very light at around 75g including the cord, according to our office scales. In comparison, the foldable Skybean chasecam weighs 150g but offers more protection for the camera, and the PPG Smoke chasecam is 162g. 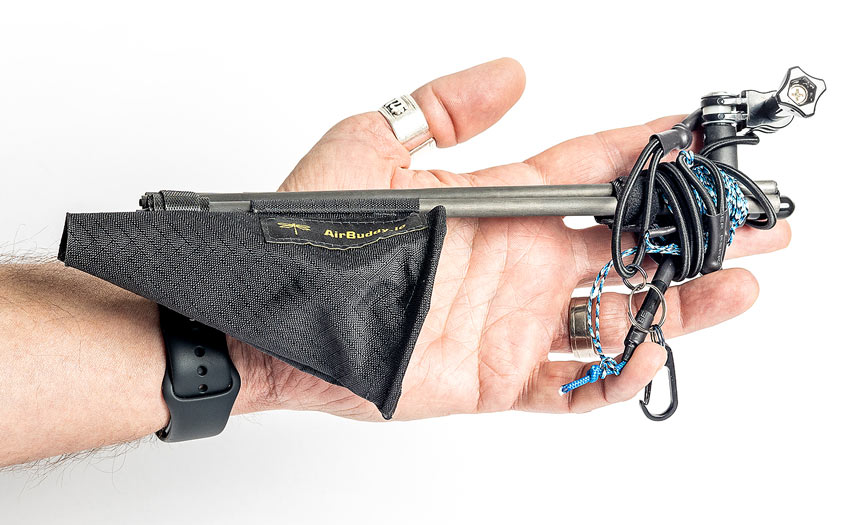 When packed the AirBuddy is pretty flat, so it will easily fit in a pocket with little risk of it getting distorted, something that non-folding designs can suffer from. Everything is well finished with heat-shrink over joints and knots so they can’t slip.

The camera is mounted using a standard GoPro mount. You have to unscrew the normal foot and slot your camera case into the mount on the chasecam. The camera should be hanging down, so you will have footage that needs to be flipped when you edit it; no big problem as even a basic phone editor can do this.

The main disadvantage of the mount is there is no protection for the camera other than the frame you use to mount it, so a bit more care may be needed. AirBuddy recommend having a launch assistant on shallow or rocky launches.

The mount pivots around a central point so you can adjust where the camera is pointing, which is useful if you are mounting the chasecam off-centre for a slightly different perspective. The mount also allows you to adjust the field of view vertically. The downside of this is that if your camera does bounce off launch, it can get turned right around. I ended up with an entire video where the camera had been pointing backwards!

The cord is quite thin paracord with an elasticated section at the end near the wing. It attaches to the AirBuddy with a lark’s foot knot, that feels a bit flimsy when you put it on but seems to work well. At the other end is a small plastic clip for hooking into an attachment point on the wing. Between this and the elasticated cord is a metal loop designed to break at about 2kg pull, just in case the chasecam catches on an obstacle.

On our flights the system worked well, the only caveat being the camera moving when it hit the ground during a launch, but more careful layout or an assistant would reduce the risk of this happening. I was able to use a pitching movement to catch the camera and fix the problem in flight. As with all these devices you have to make sure it doesn’t sit in the dead air behind you. The big advantage of this unit is it’s small enough that you can leave it in a pocket of your paraglider bag, so it’s always to hand when you want it.