Organiser of the Paragliding World Cup has been missing in Peru since Friday 1 July. 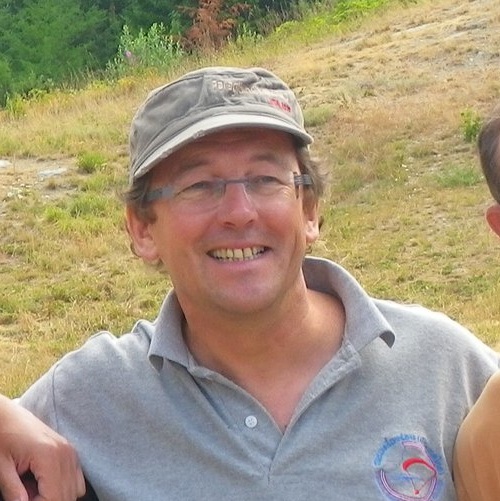 Xavier Murillo has gone missing whilst paragliding in the Andes. Photo: Peter Chrzanowski

The Paragliding World Cup Association is appealing for funds to help find Xavier. Payments can be made through PayPal (you do not need a PayPal account to donate – just a card). Please donate what you can: every pound/euro/dollar counts.

The Paragliding World Cup is updating its website as information comes in. They report:

At present a search and rescue operation is under way, but missing resources are slowing down the searches.

The Paragliding World Cup Association has asked Mike Christiansen, a Chilean pilot, to go there and assure the coordination of the rescue team as well as reporting to Xavier’s family, the French embassy and the World Cup Association. Mike is assisted by Stefan Zumsteg, a Swiss pilot living at Lima.

The Paragliding World Cup Association committee is now guaranteeing that enough money is available to carry out the search operation with the maximum speed.

We are urgently raising funds to make sure that we can continue to search with the maximum efficiency. Please make a donation.

We just spoke Peter Chrzanowski in Huaraz, Peru. He told us that there is still no sign of Xavier.

“After the first plane was turned away, a second turned up and took six of us up. We made five passes and flew a total of 450km looking for Xavier. Cloudbase was quite low still though and we could only get up to the bottom of the glaciers. Had he been on the ground below the glaciers we’d have seen him though as we were flying really low.”

Peter and the team were airborne for over two hours.

The search continues again tomorrow, hopefully with a helicopter too.

“Bad politics” are hampering the search for Xavier Murillo who has gone missing in the Andes in Peru according to X-Andes organiser Canadian pilot Peter Chrzanowski.

Xavier went missing on Friday 1 July after failing to report back after launching from Caraz in the Cordillera Blanca.

And now search and rescue efforts, hampered over the weekend by bad weather and low cloud, have run into trouble over bureaucracy.

The rescue plane, expected to take off to look for Xavier this morning (Monday 4 July), was instead cancelled at the last minute. Politics and infighting between rival rescue companies have been blamed for the delay.

Xavier, 49, has been flying for over 25-years. He was taking part in a reconnaissance trip for an adventure flying race called the X-Andes, an X-Alps-style cross country flying comp in the Andes scheduled to take place next year.

The X-Andes reconnaissance trip has been exploring the Huaraz valley and surrounding area in search of the best route for the X-Andes to take.

Speaking from a hotel in Huaraz this morning Peter Chrzanowski said: “[Friday] was a beautiful day. Quite a bit of wind up high, but still fine.

“We were flying from a new site we have developed near Caraz, about 70km north of Huaraz. We had organised a day for the local media so there were lots of people and cameras on launch.

“The tandems launched first then Xavier, Jeff [Cristol] and James [Kiwi] Johnson and the other pilots.

“Jeff and James both landed saying it was strong but they could still penetrate. Xavier was last seen heading back into the big stuff.

“He was high, around 6,000m, when we last saw him and [he] looked confident in where he was going. We thought he was off to take some photos.”

The Corderilla Blanca forms a north to south running barrier interspersed with high cols and deep canyons that the air rushes through.

“We were all very aware of the venturi effect of the air rushing between the high peaks. We had talked about it together, and the canyons, so Xavier was well aware of the dangers they could pose. He was well above them though,” Peter said. 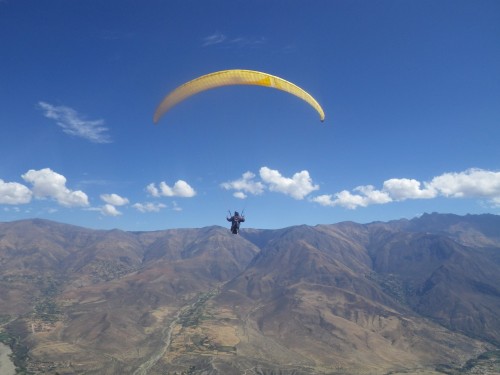 The route from Caraz to Huaraz, the nearest big city, is a classic cross country paragliding route in Peru and follows a 60km valley in the shadow of 6,768m Huascaran mountain.

As classic as it is though, there is no resident flying scene, paragliding school or even tandem operation to speak of. The only flying there is carried out by adventurous visiting pilots.

Xavier was carrying a radio and a mobile phone, Peter said, although he was not using a Spot device or other tracking device.

He said the rescue operation had been ongoing for two days. “We’ve driven up to the roadheads of some of the valleys and high up on the other side of the main valley and tried radioing across into the Corderilla Blanca in the hope of making contact.”

After failing to report back on Friday evening the alarm was raised on Saturday and a search by car and foot begun.

However, that has not happened.

Peter explained in an email after we had spoken to him: “The plane was cancelled [this morning] because of bad politics.”

Organising air search and rescue is notoriously difficult in Peru and, with helicopter companies quoting two to three days to organise a chopper, Peter said he opted to rent a private plane to search for Xavier.

“All other [rescue] outfits told us [they need notice of] two or three days for a helicopter, so we went to a faster aircraft company instead,” Peter said.

However, the plane company is not certified for air search and rescue, so the insurance company involved has refused to guarantee payment. As a result, the aircraft did not take off.

Peter thinks, “other rescue outfits in Peru” have been “lobbying” to be used instead of pulling together to rescue Xavier.

He added, “[We want to] put pressure on the insurance company to allow a plane to search until a helicopter can take over.”

It is not known how quickly another air search can be organised. Questions over Xavier’s insurance – reported to be only €10,000 for search and rescue – have been raised but at the time of writing we have been unable to confirm what the position is.

The French Embassy in Lima has been informed and is involved in the search. The Paragliding World Cup Association is also in close contact with Peter in Peru.

• A Facebook page has been set up by friends of Xavier in an attempt to help coordinate information flow.

• There is also a thread on paraglidingforum.com.

• Are you in the area and able to help search for Xavier? Post below.