DONATE to the search and rescue effort

The PWCA site have reported that their man on the ground Mike Christiansen is talking to the boy who saw what must have been Xavier’s glider the evening he vanished. Groups of foot-based searchers are combing the terrain and donations have raised enough money to rent the plane for another air search.

Local time in Huaraz : 09:00
—
In the early morning, the sky was cloudless and we could expect the best conditions for the research but high lenticular clouds are now pointing meaning high wind at altitude…

Thanks to the donation, we can afford one more air research today but the difficulty to find a plane is persistent.
The Pilatus that we were expecting to use is based in Cusco. This plane is dedicated to a job but we’re explaining our priority and the embassy is pushing to have this plane for today. This plane must join Pucalpa to get ready for the search..no presurized cabin so we need probably oxygen…

Mike is now based in Huaraz : the Police and military officials are very cooperativ. The Police sent some guides too (we have to pay for the local police rescue. That’s the rule in Peru). They promise to find a special DEA plane that is equipped by a thermal scanner but I think that’s for tomorrow too.

The groups of guide we enrolled are running. They have the instructions to report back to Mike and/or to the Police.

It seems that the Embassy could find a way to locate Xavier’s phone. We’re waiting for their feedback.

To involve and motivate local people, we set up a reward announcement of 3000 $ to whoever could help us to find Xavier.

An other direction that we will follow : Peter informed that he received, when he was at the police yesterday night, a sighting of a paraglider high over Huaraz , which means Xavier would have flown much further than we thought following the route of a Polish Pilot a few days earlier.

Mike is driving to meet the boy. He spoke via telephone with him a few minutes ago. He stated he last saw Xavier beside Huaraz. At 5:30 heading directly east to the mountains.
A group of research will be sent 70km down more south than the main reseach area…. 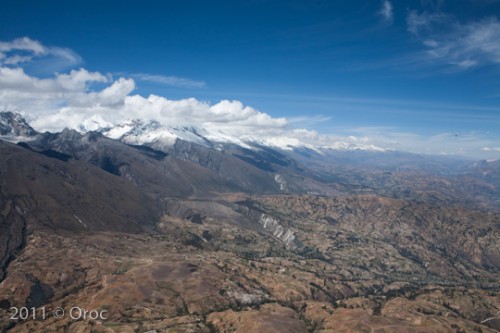 Looking down the Corderilla Blanca in the direction Xavier Murillo flew on the day he disappeared. Photo: James "Kiwi" Johnston

Xavier Murillo is still missing in the Andes and the search efforts still need the support of the worldwide flying community.

An email from X-Andes organiser Peter Chrzanowski early this morning has given a glimmer of hope of honing down the search area more accurately.

This evening we had a meeting at the police station in Huaraz and have some new news and a sighting of a paraglider high over Huaraz, which means Xavier would have flown much further than we thought following the route of a Polish pilot a few days earlier from our team.

The news came from a boy who came to the police meeting and said the paraglider was doing spirals very high at 5.30 pm Friday, 1 July.

The glider described was white on one side with some black and other colors on the bottom.

We also know that we were the only group of paragliders flying on Friday which adds to the credibility of the report.

This report matches up with the colors of Xavier’s glider and we will correspond it to maps with the individual involved.

If this is indeed true our search efforts have to move 70km south of the area we have been searching by plane till now.

I spent all of Sunday doing radio and TV interviews in Spanish and Quechua asking people to report a glider, yet keeping the color a secret to avoid non credible reports. It seems this is now starting to pay off with first reports coming in.

Xavier went missing on Friday 1 July from what sounds like a fairly routine paragliding flight, albeit in the most dramatic of surroundings. For more on what happened that day read Kiwi Johnston’s report of the day and account of what’s been happening since. Kiwi was flying with Xavier the day he went missing and was one of the last people to see him.

“It just doesn’t make sense,” Kiwi told us last night over the phone. “It was a normal flying day and Xav wasn’t out there to push anything. He’s just vanished.”

Search and rescue efforts have been hampered by first bad weather and now financial constraints. An appeal fund has been set up by the PWCA who are also coordinating rescue efforts from France. They have sent Mike Christiansen, a Chilean pilot, assisted by Stefan Zumsteg, a Swiss pilot living in Lima, to Huaraz to coordinate things on the ground.

Donations have been pouring in from the tens of thousands of pilots across the globe who have met Xavier over the quarter century that he’s been flying. However, more is needed to keep the search going. Donations can be made through the PWCA donations page.
The map is centred on Caraz, with the Cordillera Blanca (White Range) on the right and the Cordillera Negra (Dark Range) on the left. Huaraz lies 65km south east. The valley between the two ranges offers spectacular paragliding.