In the run-up to the Hang Gliding World Championships 2013, which start in Australia on 7 January 2013, Grace Cain interviews some of the key pilots from the competition. Today, longtime competitor and 2007 World Champion Attila Bertok from Hungary 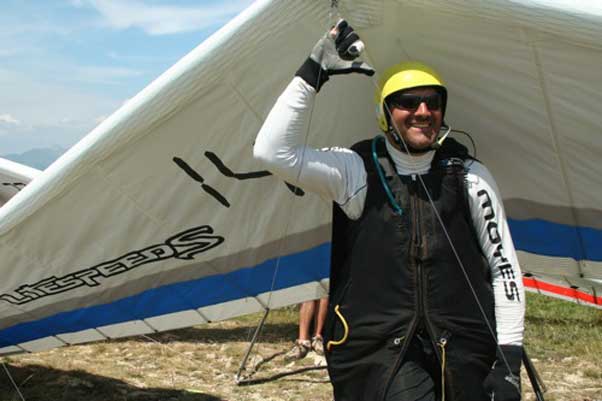 Attila, you were World Champion in 2007. Where was that?
Big Spring, Texas. I was flying a Moyes LSS5

You had a pretty epic final task didn’t you?
The last flight. I had to reset my GPS by removing the batteries while in full race mode, I had to pull it apart in the air… that was memorable enough.

What other World Championships have you competed in?
All of them since 1993, so about 11 championships.

How long have you been flying?
31 years. My first comp was the in Tokaj, Hungary, the Tokaj Cup. In competition you fly more so you learn more. You learn more in a week than you do in a year when you start competing. I wanted to improve so I started to compete.

Are there any pilots out there that have helped you become the pilot you are today?
Thomas. I tried to learn the attitude from him, which basically means you don’t compromise. But there were also many other pilots earlier and later but he was the most influential for sure. And let’s not forget about Gerolf Heinrichs, who knows pretty much everything about all aspects of hang gliding.

Where did you learn to fly?
Nyikom mountain in Hungary. In Hungary we basically only have hills, no mountains and this place is about one of the highest and has its challenges – it can be slow to climb out at times. My most memorable flight took place from that mountain in Hungary and was 160km, at the time when 100km was a very long flight.

What keeps you interested in the sport?
The concept of hang gliding is beautiful. You have 35kg of equipment and you can run off the hill and fly far away. When I started flying that ‘far away’ was a couple of 10km, nowadays it’s a couple of hundred.

What is your biggest tip for the pilots attending their first Hang Gliding World Championship?
Stay out of trouble. Don’t try to do things that you haven’t tried before.

Do you have any words of wisdom for the new pilots starting out in hang gliding?
Safety first. We have made all the mistake along the years – you don’t need to make any. A clever guy learns from other people’s mistakes

What are you looking forward to most during this competition?
Big challenging fair tasks. No accidents please.

What will you be flying?
Moyes LSS5

You’re a regular at Forbes aren’t you?
I think I’ve flown every Forbes comp, maybe not the first one though. It has some of the best flying conditions in the world – and I love flatlands flying.

Any predictions?
One pilot in particular. Manfred Ruhmer. For the top three countries I think Austria, Australia, Italy.