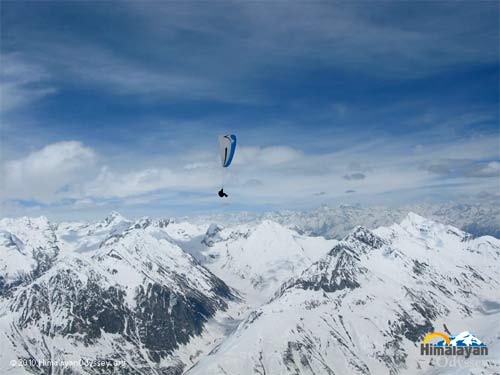 Three paraglider pilots are planning a Himalayan Odyssey, a vol-bivouac adventure, travelling the length of the Himalaya and exploring the legends, myths and life of these remote mountain regions and their inhabitants.

Brad Sanders (US, Parahawking tandem pilot), Antoine Laurens (FR, founder of Airzone Parapente) and Mike Laengle (AU) have 24 seasons flying in the Himalayas between them and knowledge of local language, culture and religion. They will be making the first team attempt to fly a 1,300 km route from Dharamsala (Himachal Pradesh) through the length of Nepal to Sikkim, India.

En route they will be stopping to explore holy places such as the source of the Ganges, visiting a local doctor who loves to paraglide and meeting Buddhist monks, amongst many other planned and unforseen adventures. The expedition will be recorded on professional HD quality film and in photographs.

The Himalaya are renowned for dense populations of raptors, but these Asian vultures are in rapid decline and facing extinction. Part of the team’s mission will be to tell the story of this crisis and investigate what can be done to save them.

The expedition will take around six weeks, and begins in March 2010. The team are busy with preparations: getting fit, selecting and paring down kit and experimenting with creating nutritious dried foods. Keep an eye on their blogs to see how the adventure progresses.