This is an edited extract from Fifty Ways to Fly Better, by Bruce Goldsmith and friends 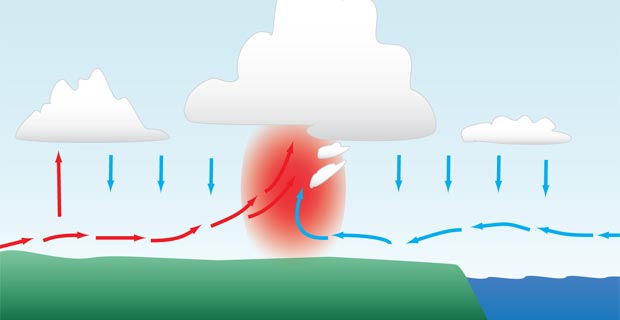 When I started flying I remember learning about a strange phenomenon called ‘convergence’. In the books, convergence was always discussed as something unusual, as though it only occurred in certain places such as on the coast, or in certain rare conditions.

Yet to my surprise I discovered that convergence appears all over the place: in mountains, flatlands, coastal sites and valleys. And that during an average distance flight you are likely to encounter it at least once if not more. In the Alps I’d say I encounter convergence during at least 50% of all my flights.

It is basically the meeting of two winds of different directions. Normally, providing that the air masses in each wind direction are different, one will ride up over the other, thus creating lift. However, if both winds are the same in temperature and density, then they will both ride up together, also creating an area of lift. In convergence zones, the thermals are generally more concentrated and are often stronger because the air around is already going up.

This is perhaps the most obvious type of convergence. It occurs usually when you have a relatively straight coastline, a prevailing, offshore wind and thermal activity inland. As the land warms up and convection starts, cool, high density air from the sea is drawn inland in a line. At the point where the cool sea air meets the warm inland air, convergence occurs, almost forming a soarable ridge in the sky.

You can spot a sea-breeze convergence in a number of ways. First, by the change in wind direction on the ground. The windsock will switch from blowing offshore to onshore in a matter of minutes. The air will also feel cooler.

Secondly, by looking at the clouds. Look for where the cumulus clouds stop in a consistent line, with blue stable air beyond.

Thirdly, if there are clouds in the sea-breeze air the base will be lower than the inland cumulus clouds. There will also often be a vertical curtain of cloud connecting the two cloudbases. Along the edge of the convergence zone this ‘curtain’ may look like darker, wispy bits of cloud hanging below the flat base of the inland cumulus clouds. If there is a range of hills near the coast expect to find the convergence zone situated over and along the higher ground.

These three indicators can sometimes all appear at once making spotting the convergence zone quite easy, especially if tell-tale clouds are present. On blue thermal days however, both sides of the convergence may be clear blue sky, so the change in wind direction on the ground may be your only sign of the sea breeze.

My experience of flying in these conditions however has taught me that with blue sky sea-breeze convergence, the sea air mass is often a slightly hazier blue than the inland air mass, creating a faint ‘line’ in the air. This is enough – if you look carefully – to tell you where the convergence zone is.

How to exploit it

Once you have spotted it the next thing is to use it. The first rule is to fly on the inland side of the sea-breeze convergence line. There are then two techniques of flying the convergence line, depending on the type of lift.

The first method, provided that there is thermal lift in the convergence zone, is to use the thermals in the normal way. The second method, when there is a weak line of ridge lift along the convergence line but no thermals, is to treat the line like a ridge-soarable hill and maintain height by doing beats along the line of convergence.

The most important thing in this case is to pay careful attention to stay on the inland side. It is easy to accidentally slip into the sea air side, in which case you will go down very quickly.

The only way to make distance flights in these conditions is to fly along the convergence line. If you try to fly away from it in either direction, then you either encounter stable air or a headwind. But staying in the convergence line is not always as simple as it sounds.

Often the ‘line’ is not straight, and tends to get pushed inwards in some places and stick close to the coast in others. It depends on the nature of the coastline and the landscape. Sea breezes often flow up small valleys near the coast more easily than over the small hills, so the convergence line is often very irregular.

To see more of what’s in the book see:

How to fly XC on an EN-A paraglider