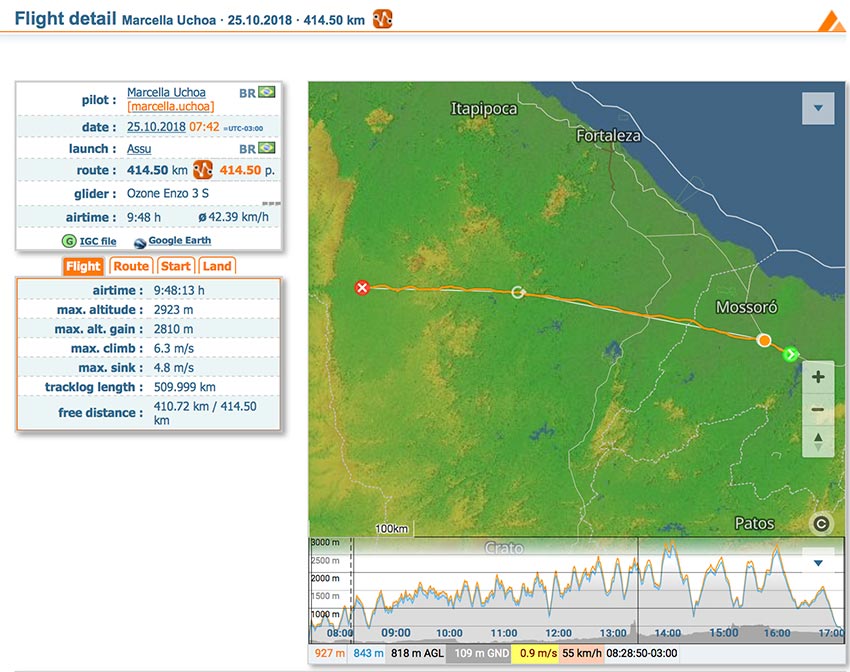 Marcella told Ozone that conditions had been difficult – blue and turbulent – and that she didn’t feel she had been climbing very well that day. The following was posted by Ozone on their Facebook page:

“The flying conditions of my record flight was very difficult. Turbulent, blue and very challenging. I was the last one to be towed, so I flew the first kms by myself, then I was able to connect with Frank Brown and Marcelo Prieto and later on we connected with Samuel Nascimento and Rafael Saladini. It was very very turbulent, it was not easy to fly the Enzo S in those conditions, so I was able to eat something only after 2pm. I think I did not fly very well, I always climb well, but that day I could not do it very well.

“Only between 10-12pm we had clouds. After Quixeramobim, turned blue again and the whole flight there was a thermal inversion making it more turbulent. We had several low saves. And when I thought it was getting weaker (I was even thinking of releasing the ballast) we took a 8m/s thermal in the lee side that we climbed out as we were papers. Although, the end of the flight was extremely difficult, very weak, blue and we were stopping at any bubbles we found along the way.

“It was very difficult to maintain concentration after beating the women’s world declared goal record at km 377. But I swallowed the celebration and concentrated on my main dream. I was 10km to record, 1000m above the ground. Theoretically, I already knew it was going to happen, but there were so many “almost”, that I only believed when I saw the 403 appear on the GPS screen, that moment I cried out of happiness, unique feeling in my whole life, never felt such big emotion like that. But until then, I did not even breathe so I did not miss any gliding haha. And I still glided 7km more, totaling 410.72km.

“Taking off in Assu in Rio Grande do Norte, cruising the whole “sertão” and landing near Tamboril in Ceará. It was 9h48 of flying. What a flight! If it were easy it would not be a record, and being on a bad and difficult day gave an even better taste. As I said last year, there is no greater connection to nature than flying the whole day. Without engine, without anything, only you, your paraglider and the wind. Taking off with the sun on your back and ending the flight with a final glide towards the best sunset in the world, in the best place. There is no better feeling in the world. That is where you are sure that all the suffering is worth it. And with the thrill of having beaten three world records. For sure, it was the best day of my life! Dream of a lifetime”. 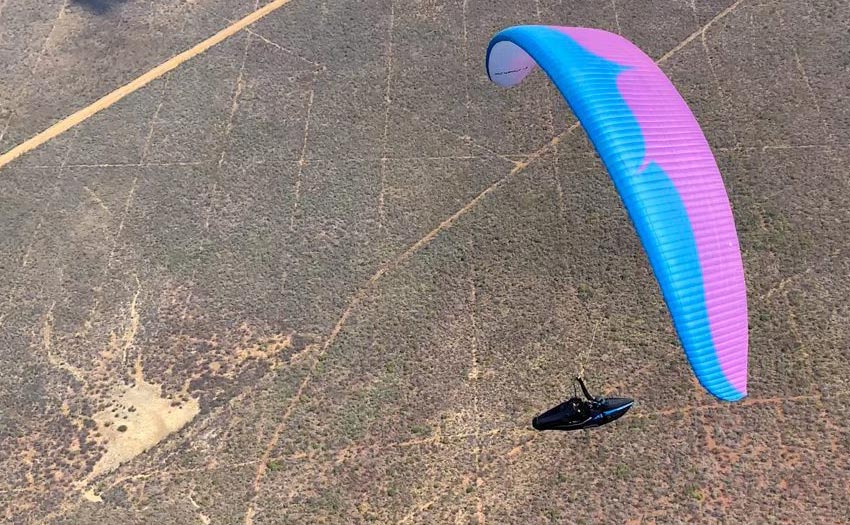