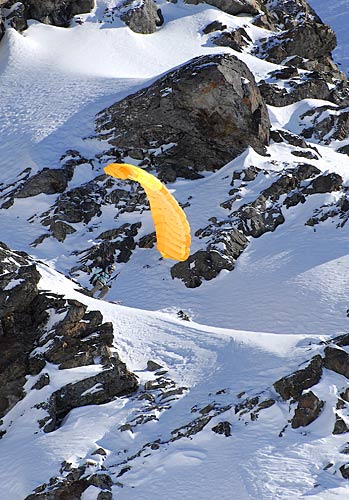 Les Arcs, France, played host to the Columbia Speedflying competition from 4-8 February. Organised by Francois Bon, 25 competitors representing six nations were carefully selected and pitted against each other in two events.

In the first ever “Speed Cross”, or parallel slalom, event two sets of gates allowed competitors to race one-on-one, their skis having to be in contact with the snow around the gates; The “Big Mountain” or Freeride event allowed competitors to choose their own best route between the rocky spires and snow fields beneath the Aiguille Rouge des Arcs (3226m).

The overall results were: