A statement was issued on behalf of Dan Hunt today at 5.30pm (UK time). It reads in full:

Nabik Daniel Hunt, known as ‘Nabik’ or ‘Dan’ by close friends and family, was speedflying in Switzerland with two friends on Saturday 15th September. After a successful launch from the Jungfraujoch at a height of 11,333ft, he did not land back in Lauterbrunnen Valley as planned. Search and Rescue efforts began as soon as his companions realised that he was not behind them.

Since Saturday afternoon, Nabik’s companions helped the Swiss Search and Rescue and military to find their missing friend. When it was made apparent that Dan’s insurance was exhausted to cover the cost of the helicopter, an appeal was launched via Facebook for donations towards the rescue operations. The response has blown everyone away, many many thanks to all who supported this effort.

Tim Good, who was flying with Dan, constantly updated his family and friends with the progress of the search, and has been searching for Dan continuously since Saturday. The efforts to date included mountaineers scaling the glacier, paragliders searching over the forested area, search dogs, more people on foot, and speedflyers that re-flew the line to see where Dan might have gone down.

The operations today were focussed mainly on a concentrated area of the Gorge. At approximately 12:20 GMT (London) news was received Nabik (Dan) was found alive and well – sitting in a cave, at the bottom of the gorge 40ft wide and 150ft deep.

The rescuers, friends of Nabik, and four German Mountain Infrantry Officers, lowered themselves down into the gorge and secured him in a harness, pulling him to safety. Shortly after, a rescue helicopter then arrived to pick him up. He was taken to hospital to be assessed for injuries.

“He is in good spirits and is overwhelmingly fine”, said Nadeem Al-Khafaji, a close friend of Dan’s and one of the rescuers.

Nabik spoke to friends and family back in the UK. “I am so grateful, touched, and humbled by all the help…thank you from the bottom of my heart”. Mr and Mrs Hunt are overwhelmed with the support from friends, family and from the wider community. They are so grateful to everyone who donated their time, money and energies to help find Nabik.

The search and rescue team and Nabik are thrilled with the outcome of the efforts and support shown by everyone, but are emotionally and physically exhausted. In the UK, Kara de los Reyes and Lisa Carnie have been co-ordinating fundraising and volunteers to help with the search. Lisa said “without social media, we would not have had access to the vast resources we needed to find him.” 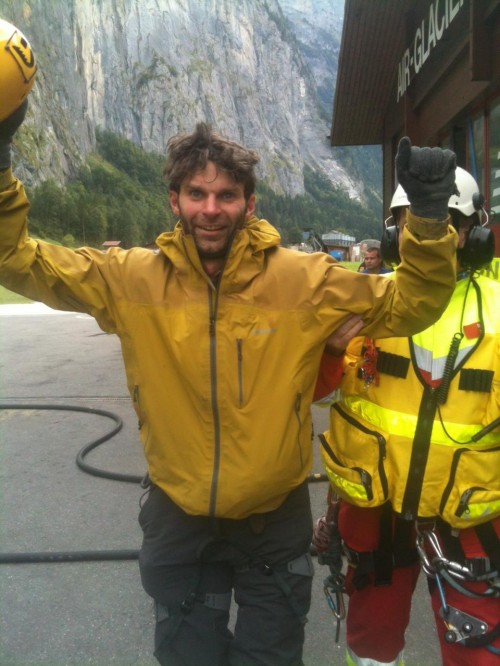 Dan Hunt was found on Tuesday 18 September. He was alive. The Find Dan Hunt Facebook page is carrying regular updates. It reported: “DAN IS FOUND!!! He is well, walking, and SMILING!!!!”

A British speed flying pilot has been missing in the Alps for three nights following a flight from the Jungfraujoch on the morning of Saturday 15 September.

Dan Hunt, 33, took off at around 10am with two friends but failed to land with them in the Lauterbrunnen Valley as planned. He has not been seen since. 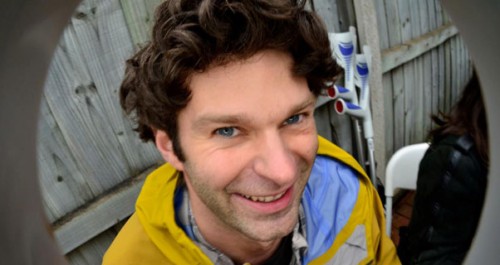 The alarm was raised immediately but a search of the area has so far failed to find him. A fundraising campaign has been set up to help pay for more helicopter air time.

The Jungfraujoch is a col between the Mönch and the Jungfrau in the Bernese Alps. It is 3,471m hight and is close to the mountain railway station the Jungfraubahn, the highest rail station in Europe. The area accommodates all sorts of air sports – from hang gliding to wingsuiting.

As the search entered its fourth day on Tuesday Kara De-los-Reyes, a friend in London who is helping to coordinate the rescue, said everyone was still focused on finding Dan.

“The team in Switzerland has searched the top of the mountain very thoroughly,” she said. “Now the focus is on forested parts of the gorge lower down the mountain.” 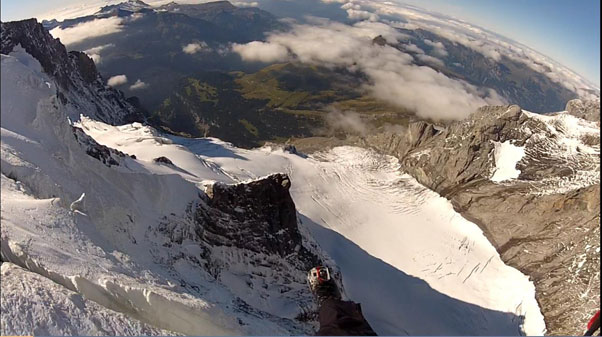 Top of the run 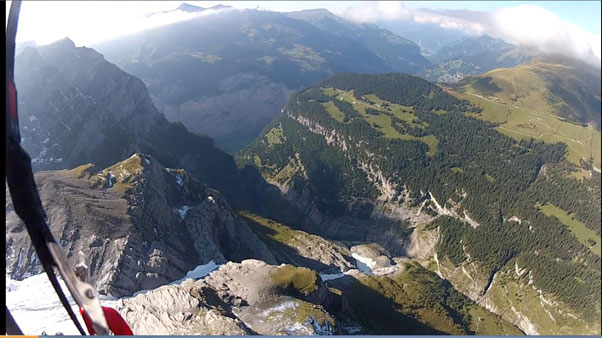 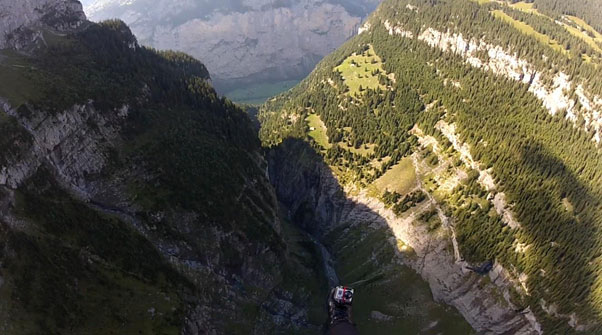 The final part of the flight, over the gorge. Landing was planned to be in the valley, on the right 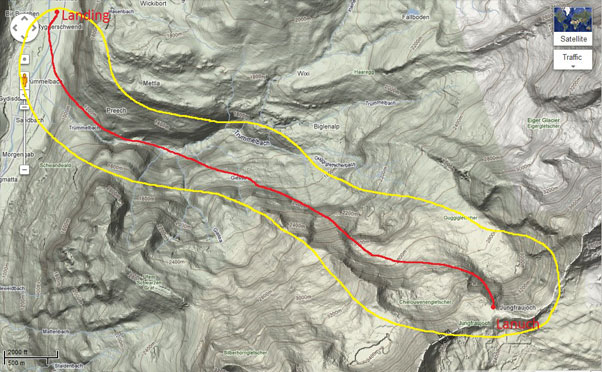 A map of the area. The red line is the planned flightpath, the yellow line is the search are

As well as Swiss mountain rescue, volunteer climbers, mountaineers and pilots have been involved in the search so far.

“There are 11 on the team,” Kara said, “including a team of climbers searching the glacier.”

A speed wing pilot is also planning to fly the line this morning in an attempt to spot Dan, she said.

The Facebook page set up to help raise funds for the search says that Dan is an experienced pilot and was seen to take off cleanly. He was not thought to be flying close to terrain.

One of the pilots flying with Dan posted on Facebook: “When I saw Dan [he was] flying high above the ground like a paraglider to be extra cautious. The possibility of an impact with the ground in low flight has almost 100% been ruled out.” 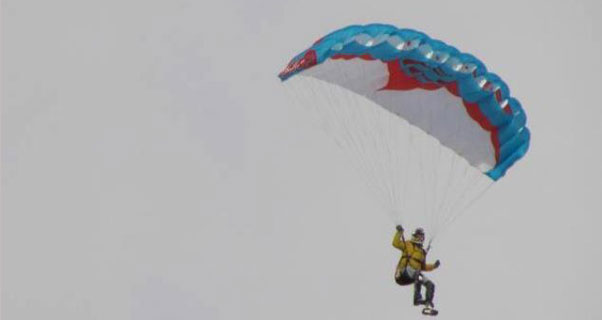 Dan in flight on a different day. This was the wing he was flying

A separate post described the conditions as “perfect” and said Dan took off “fine” and was four minutes behind the other two pilots.

Before launching the three pilots had discussed the route and agreed to land in the valley on the right side, avoiding a Base jumping competition on the left side of the valley.

A different pilot, Patrick Pearson, flying the same route in July this year. Dan is said to have been flying further away from the terrain than the pilot in this video.

Dan was carrying a mobile phone and it was switched on, Kara said. However, an attempt at locating him through triangulation on Saturday night failed. He was not carrying a Spot or other tracking device.

The Swiss authorities had been “amazing” Kara said. However, after two free search and rescue flights the search and rescue helicopter must be paid for, she said. Although insured, Dan’s insurers have refused to fund more of the search, hence the appeal for funds through Facebook and Paypal.

“So far we have £14,000,” Kara said. “The insurance money was exhausted after the first day, that’s why we’re asking people to donate.”

As well as the speed pilot this morning, a helicopter search of the tree-covered gorge will be carried out later today with a rescue volunteer suspended from a winch in order to search the tree canopy more closely.

The search comes only a few weeks after a Paragliding World Cup pilot went missing for 48 hours in Sun Valley, Idaho. Guy Anderson was found alive after two nights out in the hills with minor injuries.

Donate to the search and rescue