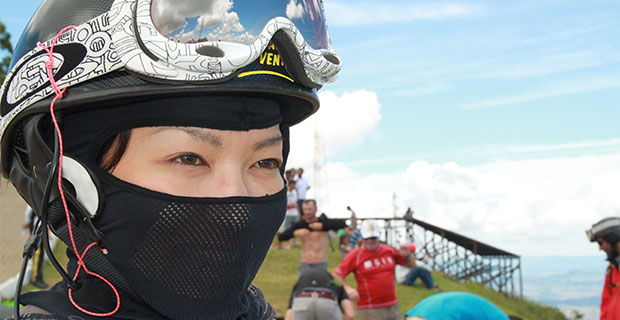 Seiko Fukuoka at the PWCA Superfinal in Brazil in January. Photo: Elisa Eisenlohr

Seiko Fukuoka has continued her record-breaking season by claiming four more records in the first few days of May.

Then on 3 May she flew 331.2km to claim a Women’s European record for straight distance.

The 331.2km flight was flown from Jeufosse, north of Paris. She was part of the squadron of French Team pilots that all flew 300km flights the same day. Luc Armant set a new French record at 369km.

Greenscreen … Seiko interviewed at the Superfinal in Roldanillo, Colombia, 2012

The haul puts her total tally of records at eight: seven world records and one European. All but one have been flown this season.

Seiko has flown an Ozone R12 on all her records this year. All the records are with the FAI for ratification.