Russian hang glider pilot Alexandra (Sasha) Serebrennikova has placed claims with the FAI for six women’s hang gliding world records, set in Australia on her Moyes Litespeed RX3 just before and during the Forbes flatlands competition.

The records came from two flights, and are:

27th December was a practice day before the Forbes Flatlands, and Sasha declared a triangle course flight for the day and successfully flew it, giving her the FAI triangle record:

“One would think that was just a preparation day before the competition. Well, this is how good Forbes is! Just hot from the oven – an observed, declared and completed FEMALE WORLD RECORD attempt for an FAI triangle. Declared distance of 210.4 km, flown with 37.8km/h on a Moyes Litespeed RX3. Tomorrow is another day in the paradise”.

The competition itself, which took place from 29 December to 5 January, is already legendary for setting the longest ever hang gliding competition task of 389km. 2 January was the fourth task, and Ollie Chitty won. (Read Ollie’s comp report here). Sasha extended the distance to 408km to claim three further records. 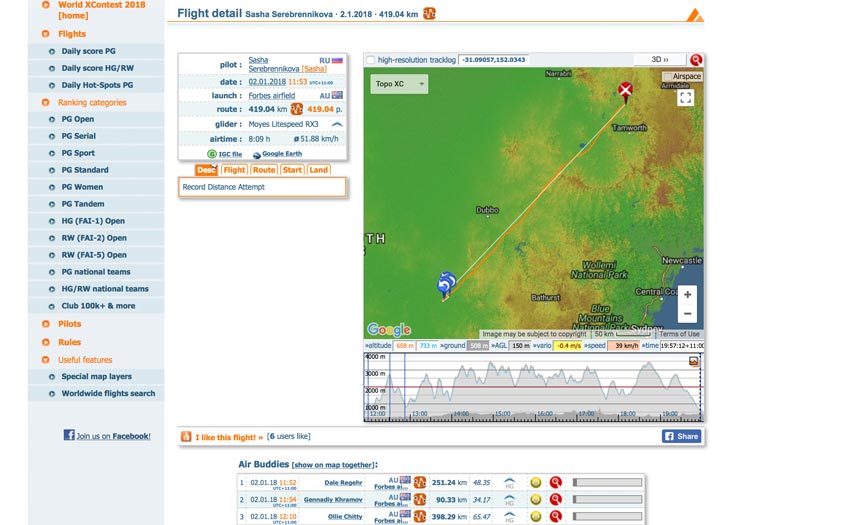 “Yesterday we flew the longest 389 km hang gliding task in history. But my aspiration was to go even bigger in order to attempt a new FEMALE WORLD RECORD for the declared straight distance of 407.8 km”.

She launched at 11:50, before the start, intending to extend the course prior to taking the start cylinder at the allotted time, and to then fly an additional 15 km or so past the goal in Manilla. At 17:45 she wrote that everything slowed down, but she still had 100km to go.

“I patiently made my way back to the cloudbase of 3,500 m and did possibly the best glide I’ve done so far with the glide ratio of 24 over a distance of 37km. Overall the air was fantastic and very supportive this evening, so after finding the last deciding lift I flew over the main competition goal to find my way further into the bunnies behind Manilla”.

Afterwards she wrote, “Huh, how good is Forbes!? (And Manilla too!)”.

The record claims are now with the FAI for ratification.

This post was edited on 29/1/17, as we initially reported five records, not the even more fabulous SIX!