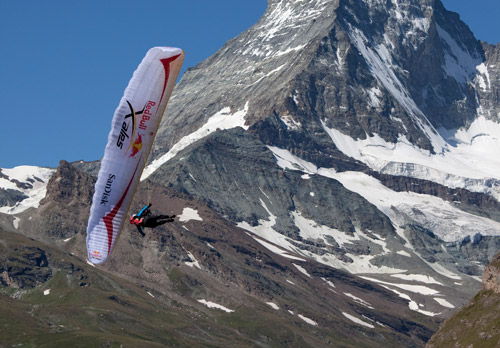 Next to the Matterhorn in 2009. Photo: Red Bull X-Alps

The Red Bull X-Alps 2011 athlete list was announced today. Surprise entrants include ‘Mad’ Mike Kung from Austria, who is entering for the first time.

Mike, 42, is better known as an acro pilot but said he is “not afraid of” the extreme adventure race that sees pilots race the length of the Alps by paraglider and foot.

Hannes Arch, the man behind the Red Bull X-Alps said the job of choosing 30 athletes was “really hard”, explaining, “There were so many who applied who would be good competitors, but we are satisfied that we made the right decision.”

He added, “I am confident the race will be a thriller, and all these guys will really push their limits to get to Monaco first.”

The X-Alps happens every two years. Competitors cross the Alps from east to west (against the wind) by foot and paraglider only. They are allowed one supporter and support vehicle but must not travel by any other means.

In 2011 the race will leave Salzburg, Austria on 17 July and will end around two weeks later in Monaco – pilots must land on a raft in the Mediterranean.

There are eight turnpoints on the 864 km route: Salzburg in Austria; the Gaisberg; Hoher Dachstein, scene of the 2003, 2005 and 2007 start; the Grossglockner; the Tre Cime in Italy; Piz Palü in Switzerland; the Matterhorn; Mont Blanc; and finally goal at Mont Gros, Monaco.