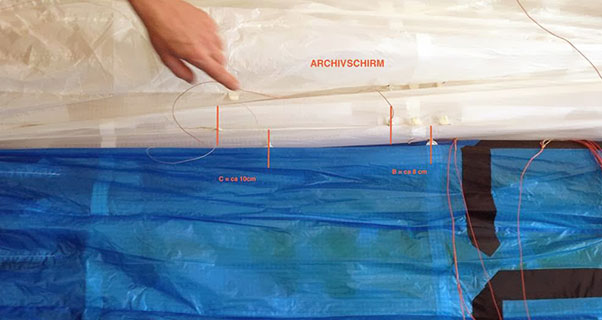 The different line-attachment positions on the Enzo 2 and the ‘Enzo 2.1’. Photo: piecanfly.com

The much-anticipated glider tests from the Paragliding World Cup Superfinal 2013 were completed in Switzerland this weekend.

The results, leaked early to Cross Country and not yet confirmed officially by either the PWCA or testing house Air Turquoise, show that the Ozone Enzo 2 paragliders used in the Superfinal in Brazil were significantly different to the sample model stored at the test centre Air Turquoise.

As a result, all pilots who flew Ozone Enzo 2 gliders in the Superfinal will score zero.

The conclusion of the PWCA minutes say:

“All pilots equipped with Enzo 2 M during the Superfinal 2013 will score no points for this event. All results will be recalculated accordingly and published as soon as possible.”

The PWCA minutes note that “no responsibility” can be attributed to the pilots flying the gliders, but point the finger of “moral blame” at “those pilots who knew and didn’t tell the truth”.

The conformity test on the Ozone Enzo 2 concludes that the ‘Enzo 2.1’ “clearly and unequivocally” does not conform to the sample glider held by Air Turquoise.

Calling the glider flown in the Superfinal the SF13, the minutes of the PWCA conclude there were differences in the length of the trailing edge and leading edge, plus the line attachment points were moved forward, by 70mm on the Bs and 80mm on the Cs.

The minutes conclude that measuring lines with “such differences in canopy construction” was “irrelevant”.

– B lines attachments points on the centre cells are moved forward (closer to As) for 70mm on the SF13 wing in comparison with the archived wing. This difference is decreasing towards the tip.

– C lines attachments points on the centre cells are moved forward (closer to A’s) for 80mm on the SF13 wing in comparison with the archived wing. This difference is decreasing towards the tip.

Lines: With such a differences in canopy construction, line length measurements and comparing in between SF13 wing and the archived wing is irrelevant.

Risers: SF13 Risers were found dimensionally correct but the construction is not similar.

The PWCA and Air Turquoise are expected to release the recalculated results of the PWCA Superfinal 2013 officially later in the week.