The medals will have to wait. Photo: Marcus King
Comps and Events, News

The FAI Paragliding World Championships have been cancelled due to the global coronavirus pandemic. The two-week long competition was due to have been held in France in late May and early June.

Organisers Air Evénement, the French federation FFVL and the FAI free-flight commission CIVL said that “too many uncertainties remain, therefore the decision has been taken to cancel the championship.”

The competition was due to take place in Chamoux-Sur-Gelon, France, from 23 May to 5 June 2021. Around 140 pilots from 50 countries would have taken part.

In a statement issued on Friday 12 March, organisers said: “Organisers and many volunteers worked tirelessly to ensure that this closed-door event would take place despite the difficult health context. In the end, the evolution of the Covid-19 global pandemic remained too problematic.

“[We] were hoping for a ‘safe, fair and satisfying’, event, as required by the FAI rules. Today, too many uncertainties remain. Therefore, the decision has been taken to cancel the championship.”

They added: “The organisers thank the many people who worked on this project and the teams who shared their worries and their support. They leave 2021 behind with regret but, they believe, with wisdom.” 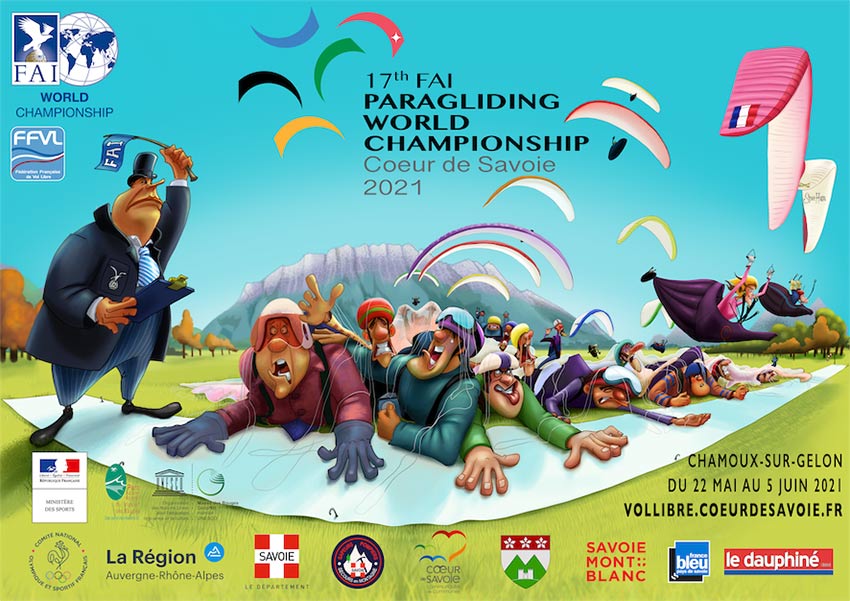 Under rules developed and approved by CIVL the organisers will now hold the next FAI Paragliding World Championships in 2023. Brazil, which was due to host the 2023 Worlds, will now host them in 2025.

Under the rules of a world championship organisers must provide a “safe and fair” event. However, with the pandemic at different stages around the world, and with many pilots unable to fly or train ahead of the competition, the “fair” element would not be possible to achieve. Travel between many countries and continents is also difficult and in many instances impossible, making travel insurance an issue.

The decision will most likely set the lead for smaller international competitions in France over the coming season. Several were watching and waiting to see what happened with the Worlds before making their own decision about whether to go ahead or not.

There’s never been a better time to subscribe to Cross Country. Subscribe before July 30 and you might win a new wing of your choice from Advance, Gin or Ozone!