One hundred and fifty pilots from 48 nations will battle it out in the skies for the prestigious title of FAI Paragliding World Champion 2019 – plus the coveted gold medals that go with it.

The competition will see medals awarded in Overall, Women’s and Team categories.

Each national team is made up of a maximum of five pilots.

The first task is tomorrow, 7 August.

Key dates over the next two weeks include:

A maximum of 10 tasks will be flown, with one mandatory rest day. 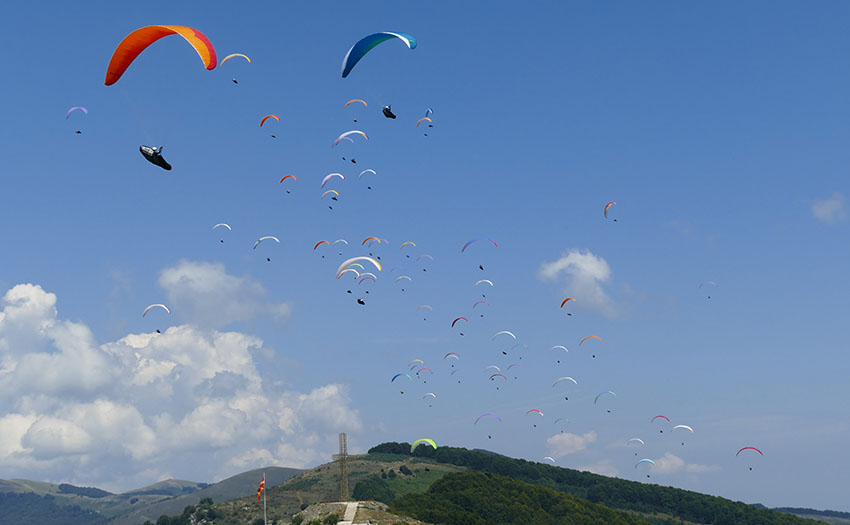 So who to watch on the live tracking each day?

Standout favourite is France. In fact France could clean up with potential gold medal pilots in all three categories.

And although four-time FAI Women’s World Paragliding Champion Seiko Fukuoka Naville is not taking part (she was planning to, but today on her Facebook page she revealed she is not 100% fit so withdrew), Women’s PWC Superfinal winner Meryl Delferriere is expected to perform strongly.

Australia also has a potential women’s podium finisher in Kari Ellis, while Flow Paragliders’ Felipe Rezende will be keen to be seen to do well on his new just-certified CCC creation, the Flow Spectra.

Austria’s Helmut Eichholzer and Alexander Schalber clearly started as they mean to go on – placing second and third in the practice task. Heli is an expert at trimming wings – you can guarantee those Austrian CCC gliders will be laid out flat at night, possibly on cotton wool under humidity-controlled conditions. It’s all about the incremental margins!

Brazil have sent a team packed with long-distance XC gurus. Rafa Saladini, Frank Brown and Marcella Uchoa don’t usually get out of bed for less than 300km. Team-flying experts, expect them to be smart and fly tactically, aiming for a national medal as well as individual.

Bulgaria is represented by Yassen Savov and Veselin Ovcharov – charismatic pilots who can fly boldly and creatively.

China has three pilots in the Worlds. This is an interesting development as China doesn’t have a strong tradition in FAI comps. We wait to see how they perform individually and as a team with interest.

Finland has Jouni Makkonen leading the team, fresh from chasing (almost) 400km in his home country.

Germany is always interesting to watch. They are one of the most professional teams in the Worlds, and come complete with TV crew and usually some proper sponsorship. In recent championships they have suffered from a lack of young blood – but young Ferdinand Vogel, 28, (currently fourth in the world rankings) and Philipp Haag, 24, might have something to say about that. Old(er) fellas Torsten Sigel and Uli Prinz head the DE crew and Ewa Korneluk completes the team.

The famous Pal Takats is one of four in Team Hungary.

Italy has a strong team including Christian Biasi, Marco Busetta, Joachim Oberhauser and, already winning gold for best-name in the field, Silvia Buzzi Ferraris, but Aaron Durogati, Red Bull-X-Alps hero and, more importantly for this type of competition, twice PWC Superfinal Champion is notable by his absence.

India is a team of two – Gurpreet Dhindsa and Vijay Soni are both international competition veterans.

Japan has also sent some of the old guard. Keiko Hiraki must be one of the longest serving members of a national paragliding team in the competition.

In Korea, Moonseob Lim is one of the well known pilots from the PWC circuit.

Host nation Macedonia has a team of three. They have the home team advantage – will it pay off?

New Zealand is a team of three, with Louis Tapper, Richard Castro and Mark Hardman.

Poland could be interesting, with Michal Gierlach and competition veteran and former Women’s Paragliding Champion Klaudia Bulgakow onboard it’s a strong team.

Slovenia is always strong – they are currently second in the national world rankings. Expect good things from any team that includes Tilen Ceglar and Jurij Vidic. Although a last minute political upset over the new Triple Seven Gambit CCC wing Ceglar was planning to fly won’t have helped pre-comp nerves.

South Africa will enjoy the conditions in Krushevo, which might remind them of home: Russell Achterberg, Theunis de Bruin, Stephan Kruger and Khobi-Jane Bowden.

Spain has a team of three, and what a three. Xevi Bonet is grandaddy to the comp scene now, and has been flying, coaching and mentoring in the competition world for decades. He’s joined by Felix Rodriguez and Francisco Javier Reina Lagos.

Switzerland has also sent a strong team, headed up by Michael Sigel with Yael Margelisch – fresh from a world record triangle this spring and who should be in the running for the Women’s podium.

The UK has what could be the perfect mix of youth and experience. Test pilot Russell Ogden has stood on more podiums than we’ve had hot dinners, Guy Anderson and Kirsty Cameron are both experienced international competitors, while Gin’s Idris Birch and current FAI European Paragliding Champion Theo Warden are the talented youths.

The USA has arrived with their blazing saddles and cowboy hats in the shape of Brad Gunnuscio, Mitch Riley, Cody Mittanck and Bianca Heinrich.

Finally, at the end of the A-Z list of nations, Venezuela has assembled a team of giants, led by the inimitable Joanna Di Grigoli, translator and manager of our sister title Cross Country en Espanol.

Pick a favourite, pick a team, and follow the action throughout the competition at these sites and across social media:

Check out the rest of the teams
www.pgworlds2019.mk

Check out the pilots and their photos
pgworlds2019.mk/live/photos.php