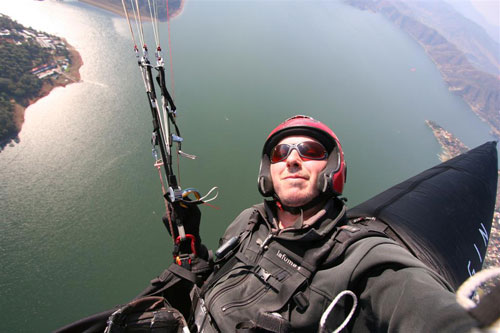 A British Paragliding Team member has resigned his place in the forthcoming World Championships over concern about two-line competition paragliders.

Mark Hayman, a well-known pilot on the international competition circuit, resigned his position in a letter to Kitt Rudd, British Paragliding Team manager. He also sent a copy to Cross Country magazine.

In it Mark says he feels “tacit pressure” to fly, “the highest performance machine available”, which he is uncomfortable doing. He criticises CIVL, the organisational body behind the World Championships them and a lobby of “self-appointed people” for not doing enough to defend pilot safety.

Referring to the ongoing discussion within the sport about the increased risk of flying two-line comp gliders, Mark writes: “I know, living in the real world, that every time I attach an uncertified two-line glider to my body I am increasing my risk substantially of having an accident over flying a certified wing.”

The move is a blow for the British Team, but the culmination of a journey for Mark that has seen him often a lone outspoken voice against the push for paraglider performance over pilot safety.

He hit the international paragliding headlines at the last World Championships, in Valle de Bravo, Mexico when he blogged here on XCmag.com from the competition.

He saw Swiss pilot Stefan Schmoker die in an accident there, and at the time condemned the sport and its organisers for their lack of action on safety.

And last year he suffered a serious blow-out while flying an Ozone R10.2 at the British Paragliding Open in St Andre, France in which the lines of his glider wrapped around his neck. Fearing unconsciousness he deployed his reserve and landed safely but battered and bruised.

In his resignation letter he again criticises CIVL, the organising body behind many paragliding competitions, which he says, “pretty much decided to do nothing” about safety at their most recent annual meeting.

Looking forward to the 2011 World Championships he says the published pilot list shows, many “average” pilots will be flying paragliders, “way beyond their ability”.

This, he says, is, “dangerous, unwise and contrary to the higher aims of the sport.”

The Serial Class versus Open Class debate has rolled on in paragliding competition for over a decade. Those who are pro-Serial Class want to see more limits on gliders in competition, while those pro-Open Class want the opportunity to race uncertified and thus higher-performing machines.

In the latest compromise between the two camps some restrictions have been placed on Open Class gliders in competition, which are intended to stop unflown prototypes being unfurled on the first day of a big comp.

With the World Championships on the horizon, and with the new rules for comp gliders and competition harnesses recently posted on the CIVL website, Mark’s resignation will undoubtedly spark another round of intense debate.

It is with regret that I find myself in a position where I feel obliged to resign my team place for the forthcoming World Championships in Piedrahita.

As you know from our discussions I have become very concerned over the last year about the safety and thus the wisdom of flying the recent two-line competition gliders. This concern is two-fold.

Firstly I do not think they are strong enough. I am unusual in that I fly at weights up to 140 kg and I can tell you that at this flying weight you spend a lot of time wondering just how strong the anchor points are into the sail.

I know the gliders are load tested but I’m a good enough engineer to know that in extreme circumstances like shock re-inflation very large loads can go through only one or two attachments. The fewer these are the more likely that one will reach its failure loading and similarly the fewer there are the less likely the glider is to keep flying if one does fail.

In any case cutting more and more lines out of paragliders and making the remaining ones thinner is, in my opinion, dangerous and stupid and having seen a couple of gliders with line failure already last year I’m not prepared to keep taking the risk.

Secondly these newer gliders are, in my opinion, and from evidence I’ve seen with my own eyes during competitions, almost irrecoverable by even very highly skilled pilots if they have large frontal collapses. It is true they collapse less but also true that if this happens the results are often catastrophic.

It seems foolhardy to continue to fly gliders on which the reserve parachute becomes an accessory and not an item to be used as a last resort.

It also seems foolhardy to fly gliders that are so unpredictable in collapses that it becomes extremely unwise to fly them close to the terrain whilst at the same time their performance means full-bar ridge racing very close to the ground is usually the quickest way to fly them.

I was hoping for some sensible direction from CIVL towards a safer and more enjoyable future but, as has so often been the case in the past, the recent plenary meeting pretty much decided to do nothing.

In the parallel universe that the Open Class Working Group exist in all accidents seem to be attributed to insufficient pilot training whereas I know, living in the real world, that every time I attach an uncertified two-line glider to my body I am increasing my risk substantially of having an accident over flying a certified wing.

Even more than this these largely self-appointed people make the stunningly subjective observation that “flying toned-down Homologation Class wings is considered far less fun by the majority of competition pilots”.

They obviously didn’t talk to me! After 5,000 hours flying across 16 years at almost every well-known site in the World the only way I can ever get much better is by becoming a full-time test pilot with a glider manufacturer, but as I need to earn a decent wage this is not going to happen.

However if a pilot like me cannot control a competition glider under all circumstances then the sport is rotten to the core and in need of change.

We have discussed my participation in the event on a certified wing or lower aspect prototype but I do not think this would be a good idea; If I were to compete on a certified wing and performed badly the rest of the team will berate me for ‘wasting’ a team place.

If I do very well on one then they will also berate me, as they’ll say I would have done better on a two-line glider. Whatever happens I cannot come out of it well.

During conversations with you and with other team members this attitude has become very apparent and I can see that there is a tacit pressure to fly the highest performance machine available (and therefore often the least safe) even if the pilot doesn’t feel capable enough to fly one.

I can see this effect in the entry list to the World’s with many pilots whom I consider to be merely average in terms of glider handling entered on gliders that will require extreme and accurate piloting way beyond their ability to deal with should they go outside the flight envelope. Again, I consider this effect to be dangerous, unwise and contrary to the higher aims of the sport.

As I sit here writing Zac, my four-month-old son, is sitting on my knee and smiling away cheerfully at the words he cannot yet understand. I have always found the attitudes in paragliding frustrating and perplexing.

I’ve never understood the desire to take a dangerous sport and then fly gliders that increase rather than mitigate that risk. I have always detested the way everybody banalises accidents or, even worse, glorifies them and I dislike the tendency to always try to find a reason for those accidents anywhere other than the obvious – the equipment being flown.

Until paragliding gets its house in order and I can therefore feel I won’t be abandoning my parental responsibilities to my new son I’m going to be obliged to sit it out.

If the paragliding community ever grows up enough to run a World Championship for certified and sensible gliders – a Serial World Champs would be a huge amount of fun – then give me a call.

How nice it would be if we could all go flying in the morning safe in the knowledge that we’d be coming home to our families safe and well again in the evening.

Best regards and good luck to the team