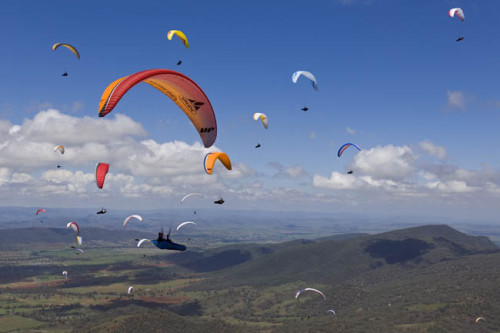 Flying his Omega 4 from Mt Borah, Manilla, Godfrey flew  335 km in seven and a half hours. He flew alone for the entire flight, and reporting cloudbase to have been around 2,400m, going up to 3,000m by the end of the day.

“The first 160 km were slow, with only a few small cu’s and big blue holes. But on the second half of the flight I enjoyed long cloud streets over the flat wheat and cotton farming countryside, and it was possible to dolphin fly at around 60-70 km/h, with a southerly tailwind of 20 km/h.”

Godfrey landed at 7:45pm, about 100km into Queensland. He said: “The final glide from 2,000m was crosswind so I could land near the homestead on a 40,000 hectare property. If I’d had a retrieve vehicle, 350 km would have been possible with the tailwind.”

Godfrey’s record is remarkable, considering it was from a hill launch and didn’t necessitate strong wind or cu-num surfing.

Manilla plays host to the New Zealand Nationals and Australian Open, running back to back from 27 Feb to the 13 March 1999.