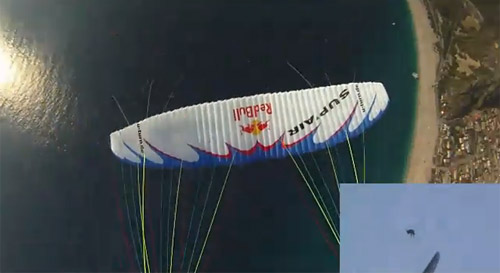 The view from above ... Pal Takats looks down on Olu Deniz. Photo: Pal Takats

Pal Takats has invented a new paragliding acro manoeuvre, the Esfera, which means sphere in Spanish.

“It is probably the only great connection left that we knew about and that was still undone,” Pal said.

In the manoeuvre the pilot goes from SAT on one side to Infinite Tumble to SAT on the other side. The trick is named after the shape of the movement.

Beyond Infinite: The Esfera links SAT with SAT through Infinite Tumble

Announcing his new move on the website Justacro.com, Pal said:

Six years have passed since Raul Rodriguez’s greatest discovery the Infinite Tumbling. Together with that invention a new dream was also born: if it is possible to build up a horizontally rotating SAT into a straight-up vertical movement (Rythmic-SAT to Infinity) it could also be possible to come back down into a SAT again to the other side.

But how to do this ‘Anti-Rythmic’ and work down the angle from Infinite Tumble without losing massive amount of energy in an already extremely sensitive movement? Over the past five years most top acro pilots have thought about this, but there have never been any serious attempts – probably because of the scary, unstable moments during the transition.

Pal succeeded in making the connection on 22 October, above Olu Deniz in Turkey. “I managed the first ever successful execution of the ‘Anti-Rythmic’ coming down to a SAT from Infinity,” he said. “Soon after the dream of ‘Esfera’ came true.”

He added, “The manoeuvre is from SAT to SAT that is turning to the other direction, linked with Infinite Tumble in the middle.

Pal made the flight using the new U-Turn Thriller 11. “The ’11 is the very latest version of the glider, slightly adjusted and reinforced as a result of our experiences gained during test-flights and the Tandem Infinite project,” he said.

After he and Gabor Kezi successfully Infinite Tumbled a tandem wing earlier this year, Pal was in Olu Deniz for all of October taking paying passengers for Infinite Tandems.

He said, “I did 19 tandem acro flights with people from all around Europe. With around six of them I flew Infinity too, as the first ever commercial flights.”

There was big interest from other tandem pilots operating in Olu Deniz, he said. “I know of at least three companies who are going to produce wings for their acro pilots so this is going to come up next year.”