Magic May: A big weekend in the Alps 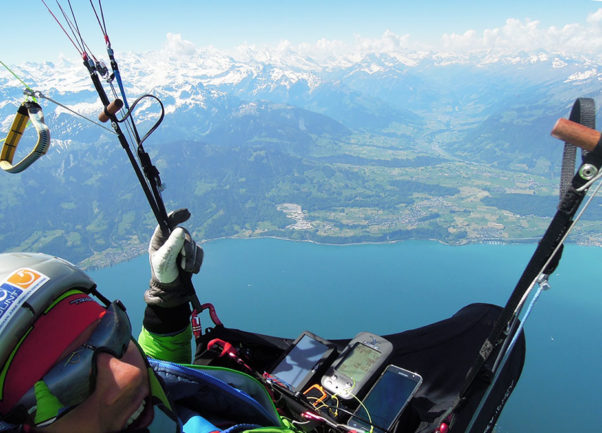 Chrigel Maurer on track to a new Swiss record on Sunday 28 May 2017. Photo: CM

The last weekend in May was a big one for free-flight across Europe, with literally dozens of 200km triangles and long open-distance flights. Here’s a quick round-up of the very best.

Friday 26 May
Jouni Makkonen (Ozone Enzo 2) flew 325.38km across the (very) flatlands of Finland. He went north to southeast, cruising under cloud streets with a base of around 2,200m. He must have had a nice tailwind – he averaged 46km/h and was in the air for seven hours.
Tracklog

Saturday 27 May
Twenty nine 200k Alpine triangles were logged in XContest on Saturday, which saw a total of 2,180 flights entered. Alexander Robe (Ozone Zeno) topped the table with a 295.44km FAI triangle, launching from Stoderzinken in Austria. He was in the air for 10h44mins.
Tracklog

Sunday 28 May
An even better day! With 2,372 flights logged in XContest. Christopher Manzl (Ozone Enzo 2) launched from Zillertal, Austria and was in the air for 11 hours. When he landed he’d completed a 313.21km FAI triangle.
Tracklog

Thomas Walder (Skywalk Poison X-Alps) was also out there for almost 11 hours. He launched from Zillertal too, and flew a 295.73km FAI. Max climbs 7m/s to 4,000m. There were more than 70 200k triangles logged.
Tracklog

Chrigel Maurer (glider unknown!) set a new open distance Swiss record with a monster 332.17km flight that started at Mabachegg in the centre-north, then took in most of the Swiss Alps, almost touching both east and west borders of the country. He reached 300km in 8h31min, before conditions turned slower. He landed at the railway station and got the last train home with four minutes to spare.
Tracklog

And finally, Tom Weissenberger was out on his Litespeed RX3.5 in Austria. He flew a massive 370.6km flat triangle over nine hours. He’s on record as gunning for 400km and noted, “Nine hours working day but this job is still not finished!”
Tracklog