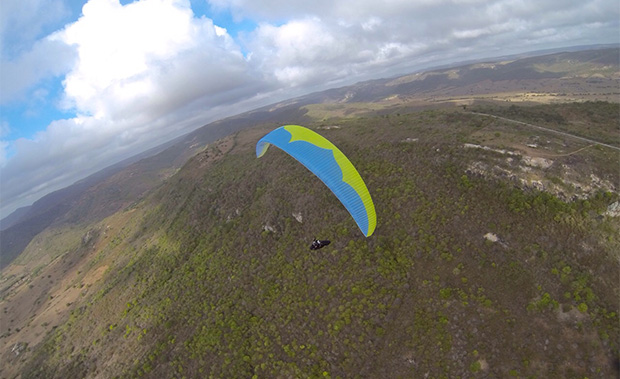 Donizete Lemos climbs out from Tacima at 7am on 5 November 2014. Photo: Rafael Saladini

Donizete Lemos flew 478km in Brazil on 5 November – making it the second longest flight ever flown by paraglider.

His flight is the longest in what has so far been a storming season in South America, with numerous 300km flights and several big 400km whoppers.

Donizete flew from Tacima in the north east of Brazil almost due west, landing to the north and west of the town of Juazeiro do Norte. His flight took 11:15hrs at an average speed of 43.53km/h. See the tracklog here.

In the air with him for much of the flight was Samuel Nascimento, who covered 454.18km.

Conditions were strong during the flight, with 10m/s+ climbs and 5-6m/s sink.

Tacima is not the traditional jumping off point for big flights in Brazil – that is Quixada, further north.

However, it has quickly gained a reputation amongst Brazilian big-distance hunters for its potential.

Karel Vejchodsky from the Czech Republic knows the area well. “We spent two weeks exploring the area around Tacima in October and it’s clear it is one of the best places to fly record distances,” he said.

“We flew four flights there over 400km long. The best was 457km, and Donizete flew his flight after our departure.” 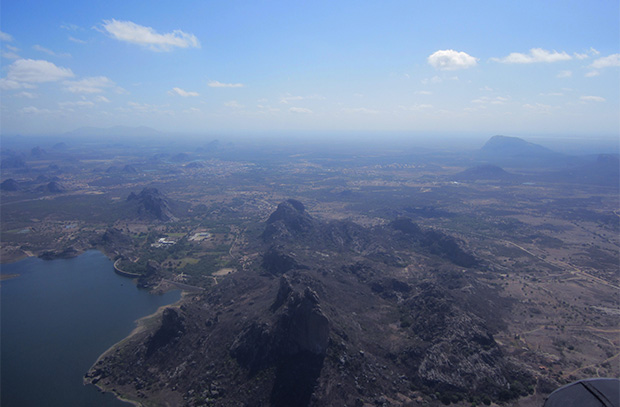 While Tacima has been the place to be, Quixada has also seen plenty of action. As well as dozens of 300km flights, Philipp Steinger (CH) flew 411km on 17 October. Switzerland’s Pascal Bissig currently leads the XContest after his season in Quixada where he racked up four 300km flights and two big 200km flights. 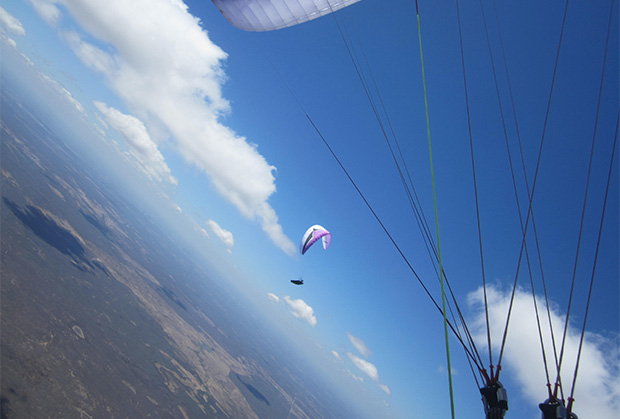 Flying the flag for Britain meanwhile, Richard Perkes and Alex Butler set a new UK distance to goal record with a 285km flight. That beat the previous UK best of 280km, set by Matt Church in Quixada in 2012. Richard went on to land at Piripiri at 318km while Alex landed at Lagoa de Sao Francisco at 305km.

The flight is the second longest paragliding flight ever. The world record distance of 503km was set from a tow launch by Nevil Hulett in South Africa in 2008, before the two-liner revolution.

Since then pilots have been trying to break the 500km mark for the second time, with many pilots heading to Quixada in Brazil with the intention of doing just that. However, with less than 12 hours daylight, average speed has to be very high – 45 km/h for more than 11 hours.

The site allows pilots to launch very early, before 8am, and fly until sunset at 5.30pm.

Looking for more hours in the day and greater average speed however, some big-distance pilots have switched their attention from Quixada to Zapata in Texas, USA. The site of the hang gliding world record at 761km, Luc Armant (FR) flew 463km here at a record encampment in July 2014, averaging 48km/h in just under 10 hours. Tracklog.

Otto Schulz keeps a note of the longest paraglider flights in the world on Paragliding Forum: