Rafa flew from Tacima in the northeast of Brazil on 15 October. He landed after more than 11 hours in the air having covered a straight-line distance of 555km – the third longest paragliding flight in history. He was flying an Ozone Enzo 3, and his average speed was 50.86km/h over the day. 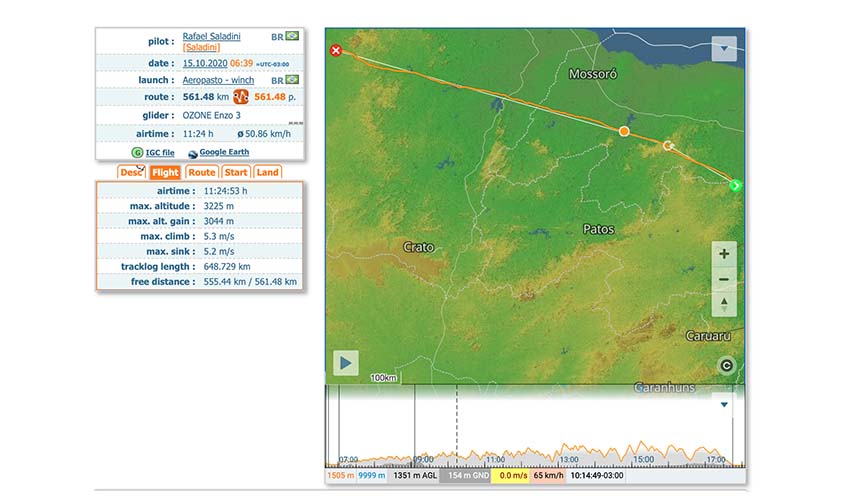 Rafael’s 530km declared-goal world record comes almost exactly a year after he, Marcelo Prieto and Rafael Barros set the new paragliding world record flying from the same place. Flying as a team and launching by tow from Tacima they flew 582km on 10 October 2019.

Rafael, an Ozone team pilot, told Ozone that he had been in Tacima for 20 days this season, waiting for world record conditions. They declared the same goal at 530km every day before they flew.

“We only had two waves [of conditions] with reasonable wind and enough humidity,” he said. “Tacima is always a mental challenge.” 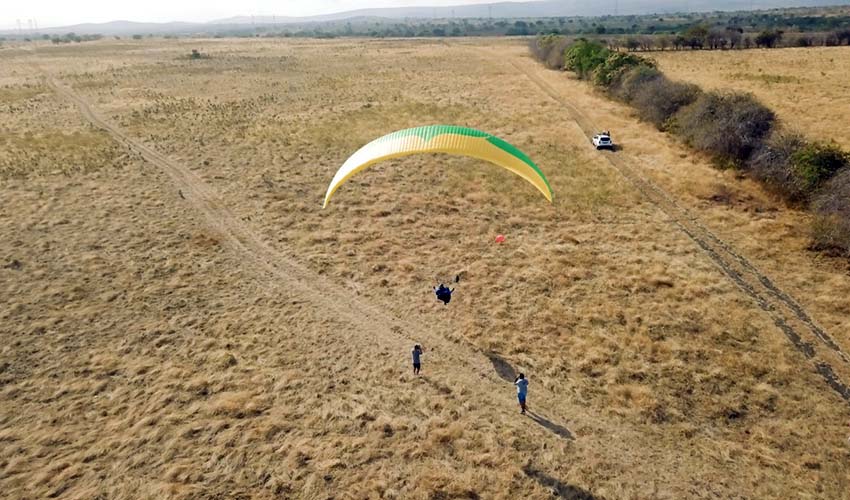 On the day he was towed into the air at 6.40am. Flying in Brazil starts early, and in October and November conditions can set up that allow extreme long-distance flights. Consistent winds and thermals allow pilots to fly from before 7am to sunset at about 5.30pm.

“I was towed to 400m AGL – just enough altitude to reach the ridge two kilometres behind where the old foot-launch [take-off] is located.”

Going for a world record was not in his mind, because the forecast was not good. Instead, he wanted to fly with a chase cam, get some footage, and then check out a potential new tow-launch runway about 100km downtrack.

After soaring for 20 minutes on the Tacima ridge he set off and, “began my unexpected +11 hour journey through the atmosphere.”

Before reaching Lagoa Nova he had to catch his chase cam before his planned landing. Having done that and cut the line, on approach, at 250m AGL he found a strong climb that took him all the way to base.

With the day clearly switching on he then changed plan. “After that my mindset changed completely. I decided to fly as far as I could and finally try to break the declared goal.”

Rafa was flying alone, which makes a difference when going for world records. The Brazilians pioneered flying as a group when hunting world records back in 2007, when the world record stood at less than 400km. So it was unusual for Rafa to find himself alone, and committed to flying all day.

“Since 2007, after my South American record of 397km, I never flew alone anymore. Team flying is my favourite way to explore the Brazilian Sertão [outback]. Sharing the sky and world records with my friends are among the best experiences I ever had.

“But this time I decided to do it otherwise. Fly by myself again the whole day. Meditate in deep silence for more than 11 hours. A pure connection with the pulse of the atmosphere, when nothing else matters, only the present moment and the next thermal.” 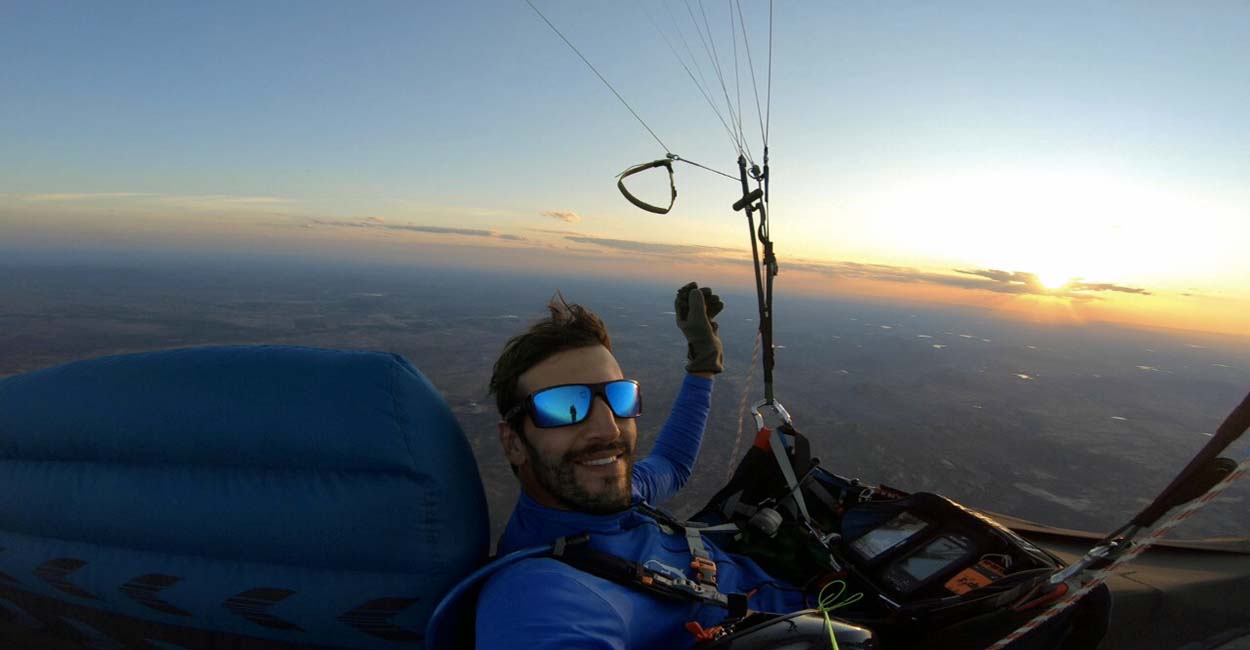 Rafael approaching the end of his flight. Photo: Rafael Saladini

Conditions were “not great” he said. “Only moderate wind and many blue holes. The only way to try to compensate was full bar the whole time and an aggressive attitude, exposing myself for an early landing much more than we usually do when team flying. It worked until 3.30pm. After that the sky turned blue and was very difficult to navigate fast and precise.

“Late afternoon, when I was already tired, that’s when team flying makes a difference, especially when we have blue sky.

“I committed some mistakes in the last two hours that cost me some precious kilometres. But I managed to break the straight distance to a declared goal world record, declaring and flying 530km and reaching a final distance of 555km, landing on a dirt road in the heart of Ceará.”

The flight was one of the best of his life, he said. “I’m really stoked! 555km is the third longest flight in paragliding history. The current straight distance world record is 582km (tow), and the previous one was 564km (foot launch). Both from our team, and I am really really really grateful and honoured to be a part of all of them.”

The flight has been submitted to the FAI, World Air Sports Federation, for ratification.