In May Ken Hutt climbed and flew from the flanks of 8,000m Himalayan giant Cho Oyu, the sixth highest mountain in the world. This is his description of the climb and flight 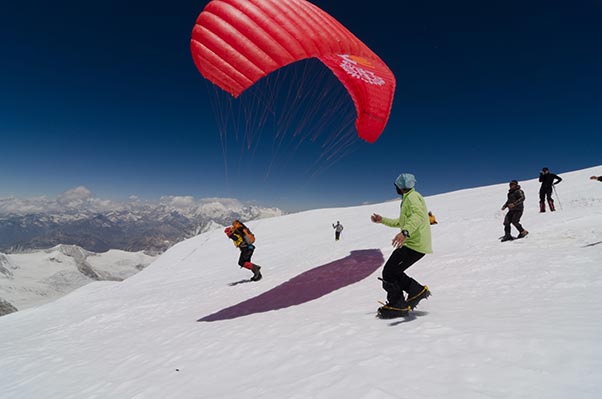 It was 6am on 23 May; the sun had risen over the summit. The wind was almost calm. This was the weather window that we had been promised. I had little sleep that night, despite a hugely vigorous day previously, scaling two ice cliffs, steep snow slopes and with an overall 800m vertical gain.

The previous night was also without much rest as we were camped at 6,400m with temperatures reaching well into the deep minuses due to the strong winds which had been blowing for many days and preventing an earlier ascent. We had been waiting at Advanced Base Camp (5,700m) for four days and watching the jet stream winds blowing over the summit.

We had seen many climbers returning to ABC, heading down from their summit attempts by the continued force of bad weather fueling dangerous climbing conditions. The forecast of a one day window prompted some urgency to commence the summit push, and three days later here I was at Camp 2 and 7,200m altitude. 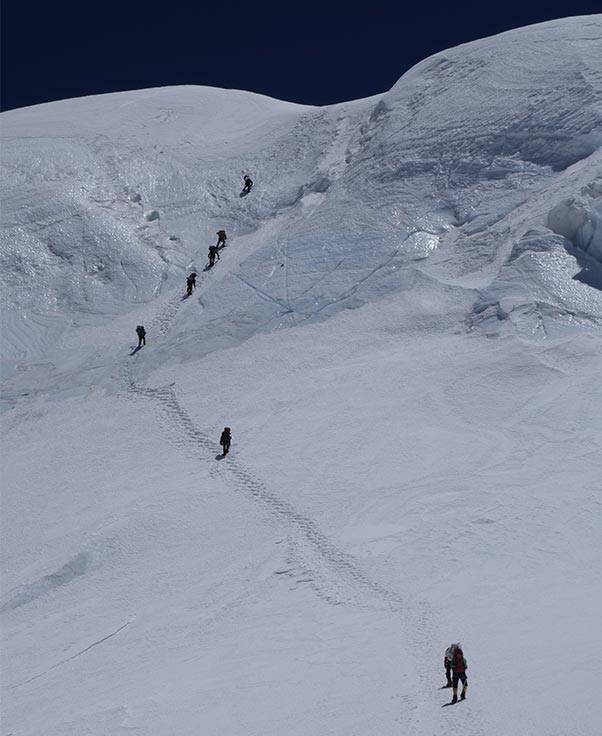 I had reached Camp 2 late in the afternoon on 22 May. Our team now consisted of five climbers, four Sherpas, and Angel, our Argentinean guide who had proved his worth by getting us, thus far, so high on the mountain.

Three team members, including my climbing partner, had returned to ABC due to illness with their summit hopes dashed. I discussed with Angel my options at this point in the expedition. I had been climbing strongly over the previous weeks and felt the summit was certainly achievable. However the weather forecast was dictating my opportunities and unless I took advantage of the current conditions, paragliding would be off the agenda.

The object of this expedition was to climb as high on Cho Oyu as possible and make an attempt to launch a paraglider from the mountain and fly back to ABC. Cho Oyu is the sixth highest mountain on the planet, with the summit registering 8,201m. The summit is basically a broad dome rather than a peak, which made it attractive, and perhaps less committing (in an obscure sort of way) than attempting to launch from a mountain peak such as the summit of Everest or Makalu. 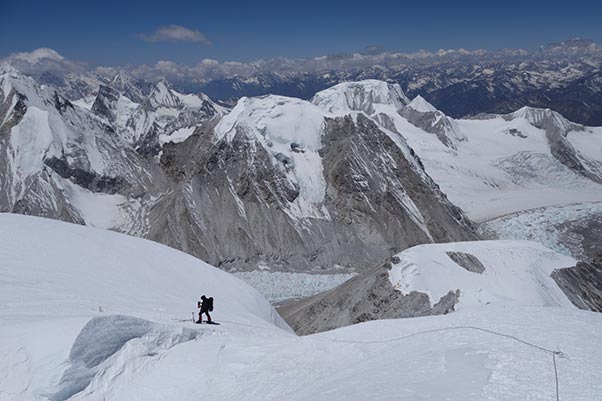 A flight from this altitude held a lot of unknowns despite my attempts to educate myself on the performance characteristics of paragliding at high altitudes, well above what could be considered ‘normal’ flying limits. Very few pilots have launched from this altitude. In the quiet of my tent my thoughts for many days previously, had consisted of simulated take offs in varying weather and mountain terrain conditions, correcting wing collapses from turbulence and rotor effects from nearby peaks, simulated landings in various terrain types – glacial moraine, snow slopes, and even dodging base cap tents and prayer flags. But the time had now come. A variable strength breeze up to only 6 knots was blowing directly up the mountain. The sky above was that deep blue, shown off by the pure white of the snow-covered mountains, the conditions, considering where I was, could not be better.

Angel and I discussed the climb ahead and I believe he would have preferred me to continue climbing to the summit that evening, however with conditions such as they were, and the opportunity to complete the quest of flying from the mountain and maximize the fundraising and awareness potential of the End Polio Now Campaign, the decision was made to make the attempt at launching from here.

Prior to the commencement of this expedition, we had made a number of attempts at embassies, to obtain permission from Chinese officials and gain some sort of official permit for this venture but no joy was forthcoming. At Base Camp we approached the Tibetan Mountaineer Liaison Officer for approval to paraglide and was informed that this was not possible and any decision on this would need to go to Beijing and may take months and , due to the proximity to the border with Nepal (Cho Oyu’s summit is the Tibetan/Nepalese border) permission would be unlikely. The unofficial response from the Liaison Officer was: “No prohibition but no permission. You fly, do not fly from summit and do not bring attention of army,” and “I know not about you”. 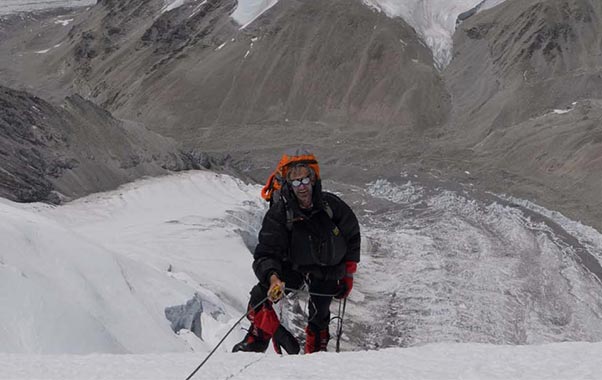 Ken Hutt climbing Cho Oyu in Tibet prior to flying off it. Photo: Ken Hutt collection

This expedition was about promoting Rotary’s worldwide efforts to eradicate the Polio virus from the planet. The commitment to the success of this mountain adventure was brought about by the chance to promote the Rotary fundraising and the awareness campaign. How could I best serve the objective with the most beneficial outcome? What is going to make the biggest difference? It had been a personal dream for many years to attempt one of the 8,000m peaks as a climber, and here I was, so close to the summit, with the final summit push to happen from 10 o’clock that evening. On the other hand very few pilots had ever attempted a launch from over 7,000m altitude and the site of our red “END POLIO NOW’ glider over Cho oyu and the surrounding peaks would really make a statement in the promotion of Polio eradication.

At 9am the weather conditions on the mountain had not changed and after about an hour on bottled oxygen, with the blood warmed and the head thinking straight, (there were four Sherpas amongst others who would question this) I struggled with my climbing boots and crampons, grabbed an ice axe, placed all my sleeping gear and climbing harware in the pack, and with the glider, headed out to the snow slope and assessed the suitability for launching.

The slight wind that was blowing had now died and was now almost calm, which I thought may make takeoff a bit more difficult. The snow slope was gentle and increasing in gradient further down the mountain but did provide ample abort opportunities should common sense suddenly prevail.

My Glider, an Ozone Ultralite 3, was purpose-made for this flight and displayed the Rotary wheel emblem and “END POLIO NOW” insignia. After many promotional photographs it was time. The karabiners were clipped to my harness, the risers checked, the speed system clipped to the speed bar. 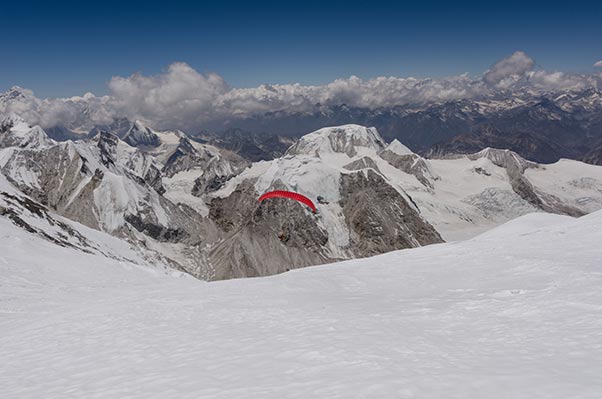 The forward launch was textbook and despite my doubts about crash-and-burn due to the thin air, after 30m of adrenalin-filled running I was off the snow and flying over the ever-increasing snow slopes, then over the first ice cliff with 1,500m free air below me. Strangely, it was only then I realised my breathing was heavily laboured and I was struggling to find my next breath. The realization that running 30m at 7,200metres above sea level is quite exhausting exercise was very evident and it took some minutes to recover. Once this moment of panic was calmed, I then had full realization of the incredible surroundings and prayed that the GoPro was on record.

Although my wing was only 21 square metres, which made soaring unlikely, there was an apparent gain in altitude which allowed me the opportunity to stay close to the mountain and head over Camp 1 before my descent following the glacier in the direction of Advanced Base Camp. I was not carrying a GPS or vario as weight on the climb is a real issue. 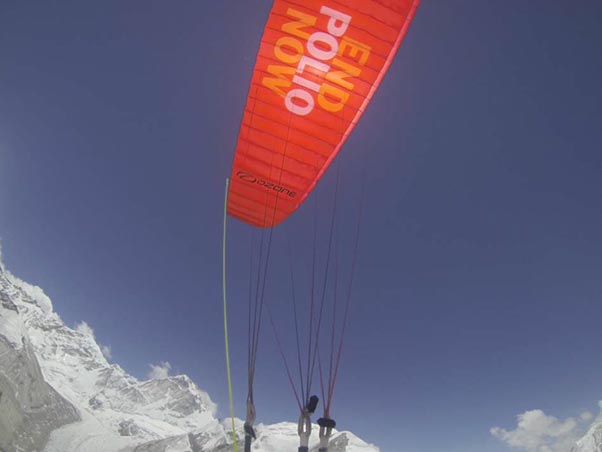 Due to the military presence at various lookout towers near the Nepalese/Tibetan border, my flight plan involved a direct route to ABC and not fly in open skies, but rather I stayed close to the mountain and dropped down into the valley formed by two other peaks on either side of ABC. I did not wish to tempt any response by the military or test their charitable feelings in any way. This decision put me in an awkward position when it came to landing, as the obvious point of touchdown was a broad snowfield on the other side of the glacier to ABC, but possibly in full view of a Chinese Army lookout tower. This snowfield also formed a mountain pass into Nepal and there was reported history of aggressive military intervention on this pass.

This meant a landing on the moraine (boulders pushed to the side of the glacier by the slow movement of ice down the valley over centuries) to which there were very few snow patches or really flat areas. The other condition I had to contend with was not realised in full until on final approach. The flying speed of the glider. I should have realized by the wind noise through the risers that I was travelling much quicker than I would have at sea level due the there being only about 35% relative air pressure at this altitude.

I was still about 1,000m above my landing and commenced a series of steep banking turns to wash off altitude. I could just make out a number of people at ABC standing outside tents having heard of the launch by radio from Camp 2.

I came in on final approach with my sights focused on a small snow strip about 30m long and six metres wide. I had identified this as a possible landing site when resting at ABC many days earlier and had also placed a wind vane (old Tibetan prayer flag) on a bamboo cane in the snow.

Alas, even good planning does not make a good landing when I realised I was going to pull up short, I had a few short seconds to re-evaluate the situation. Up until this point I had been flying quite conservatively, and not wanting to discover the glider’s limits at this altitude (I was also carrying a 13kg pack and was right on the 100kg weight limit of the wing). After aggressive braking I came to a near stop before hitting the rocks of the moraine and although I tripped, was fortunate enough to not sustain any real injury (a bit of pride perhaps).

The flight from 7,200m to 5,700m (over a distance of about 6km), and had taken me 13 minutes. Five minutes after landing I was drinking hot lemon tea provided by our very excited Tibetan cooks.

Ken Hutt, a member of the Rotary Club of Berry, New South Wales, Australia, and a member of the Stanwell Park Hang Gliding and Paragliding Club spent five weeks on Cho Oyu in Tibet, the sixth highest mountain in the world at 8,201 metres, where his intent was to climb as high on the mountain as possible and paraglide back to Cho Oyu Base Camp.

Ken is inviting pilots and readers to support the Polio Challenge by making a donation to:

Donations will be matched 2 to 1 by the Gates Foundation effectively tripling the value. “The smallest donation will make a huge difference,” says Ken.

FEEL THE LOVE
All Cross Country subscribers are about to get a free £10 voucher to spend at xcshop.com! It’s our way of saying thanks to all our readers – longterm and new – for supporting the magazine. To get your voucher, just make sure you subscribe before Wednesday 16 July 2014, or double-check your subscription is valid on this date.