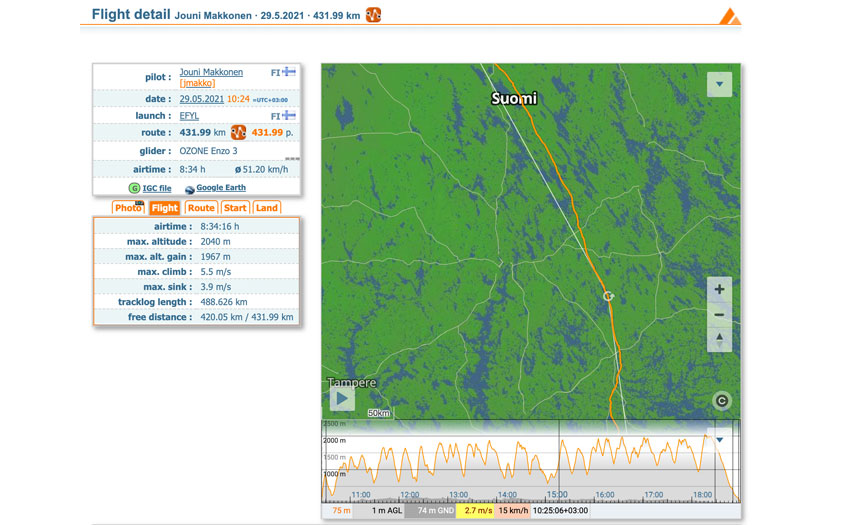 Jouni Makkonen flew just short of 432km XContest distance (420km open distance) across Finland from north to south on his Enzo 3 on 29 May, landing at the sea.

The flight took him eight and a half hours at an average speed of 51.2km/h. It is a new Finnish national record and the first time the 400k barrier has been passed in Finland. On the same day Pekka Raudaskoski also broke 400k, with a 420.3km (405.92km open) flight in ten hours on a Niviuk Peak 4.

The fact that ten hours’ airtime is doable is interesting, pointed out Tumas Seppänen, another Finnish pilot and former Finnish hang- and paragliding committee member. “Jouni’s flight took eight and a half hours, but the thermals were working maybe two more hours … so there is a slight possibility to break 500km in Finland some day!”

He explained: “The best weather for breaking distance records in Finland is when the wind is from the north or north east, bringing us dry, Siberian air. So to make a long distance flight you have to drive up north and fly back south.

“For many years we used to make the record flights from Kauhava airport, but in 2019 Jouni flew to the southeast coast of Finland (380km) and realised that to fly 400km you have to move the take-off further north. The new record flight was made from Ylivieska airport and since Jouni flew to the coast again, we have to move the take-off even further in the future. That is a lot of driving!”