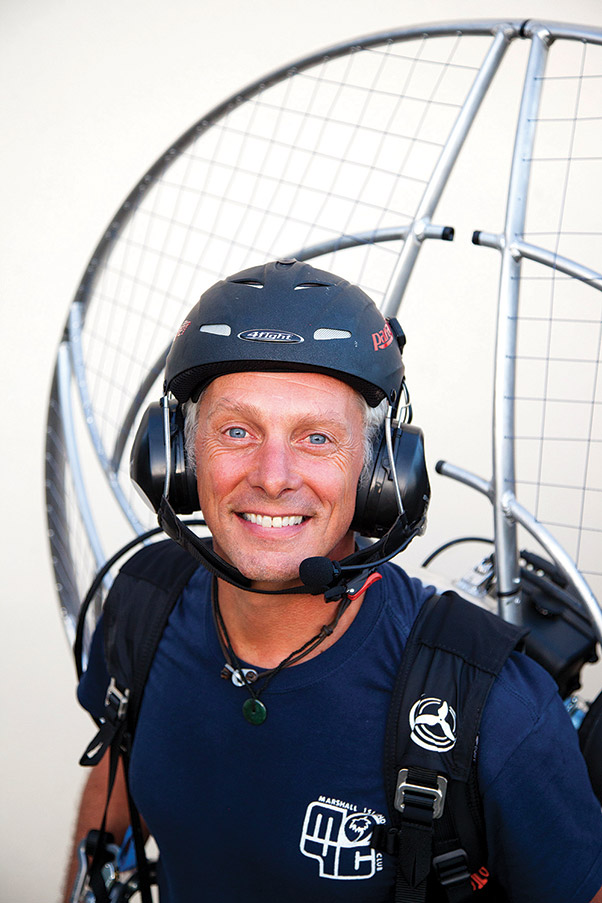 Dean Eldridge, paragliding and paramotoring instructor and regular columnist with Cross Country Magazine has died following a paramotoring accident in Spain, he was 50.

The accident happened on Tuesday 7 July in northern Spain when he was testing wings.

According to a local press report, emergency services were called to attend the crash site, a field 100m from Siurana airfield, at 8.53pm.

The fire brigade and ambulance service sent two crews to the scene.

Dean was immediately transferred to accident and emergency at the Doctor Joseph Trueta University Hospital in Girona, a 30 minute drive away.

However, he died from multiple injuries sustained in the crash 45 minutes after entering the emergency room.

No more details about the accident have yet been made public.

After an early career running diving schools, Deano, as his friends called him, discovered paragliding in 1994, learning to fly at a school run by Paul Farley in Wales. He continued his training in Colorado in 1995 and was a dedicated free-flyer for a decade.

In 2005 he discovered paramotoring, and he quickly grabbed the sport with both hands, excelling at the discipline and enjoying everything it had to offer.

“I did a swift conversion course and that was it,” he told this website last year in an interview promoting his recent book.

“I was off flying at every opportunity. In fact I very often used a field near my folks in Hampshire, England, at a place called Five-ways. It was soon nicknamed ‘Skive-ways’ as I was always there instead of at work!”

Dean developed elite skills, and was a keen competition pilot for several years. He won Best Newcomer at his first British Open and took the British Champion title in 2012. He was on the British team and had represented his country at the Paramotor World Championships twice.

As well as competition Deano had a passion for flying fast – earning a world record for speed over 15-25km at a fly-in in Arizona.

“I did it though on an old wing (Fusion 20) and to make it fast I strapped 25kg of bullets (honestly!) to an already heavy, fully fuelled Parajet Cyclone motor. The whole thing weighed as much as me!”

He was also an expert slalom pilot, earning a place in the Parabatix display team.

As well as his teaching and flying skills, Deano was a natural communicator. His easy smile and, dare to say, good looks, won over everyone who met him.

Last year his regular columns and articles were collected into a book, Paramotoring: The Essential Guide. It didn’t matter what he was doing or where he was, his commitment to the year-long project was absolute, as it was with everything he did.

As well as writing he was a talented cameraman, although always quick to underplay his own skills. In recent years he had teamed up with Brazilian producer Sylvestre Campe and travelled the world as a paramotoring cameraman, enthusiastic about every country he visited. Rubbishing the rumour that he was often mobbed by teenage fans in Rio de Janeiro airport, he did allow that he was now occasionally recognised in that country.

Dean Eldridge showed what our sports can bring you, if prepared to learn, and to open your heart and mind. More, he gave back as much he took out of the sport – an aspect of his character summed up perhaps best when he spoke about his love of teaching.

“With teaching you are quite often starting with someone completely new to the sport, it’s like an artist having a blank canvas.

“In a number of days you have taught this person skills that have taken them to the skies under their own efforts, and as a result have a smile that is impossible to erase.

“You have helped create something very positive – and that is good for the world.”

Dean Eldridge is survived by girlfriend Nicky, no children.