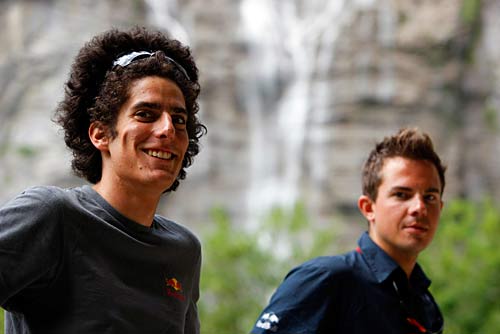 Pal Takats and Gabor Kezi. The paragliding duo are about to attempt the world's first ever infinite tumble on a tandem paraglider

Pál Takats, the current leader in the paragliding Acro World Cup, is plannning to attempt the World’s first tandem infinite tumbling sequence at lake Walensee in Switzerland on 6 August 2010, with passenger Gabor Kezi.

The pair will use U-Turn’s new XXL Thriller acro glider. Designer Ernst Strobl says, “The loop can be performed because the Thriller is extremely light and dynamic but also extremely resistant to drops in pressure”. It has a reinforced nose profile and additional ventilation flaps on the upper sail to improve stability.

“Infinity Tumbling is the most difficult acro trick with the highest degree of difficulty for both pilot and glider“, says Pál. “The glider is very big and has therefore got long lines. As a result, you have got a longer way and need more time to turn the glider and thus the acceleration has got even higher ‘G-Kicks’ in the lowest point.“

Pál estimates the kicks to have 7G – which means the same conditions as the fighter pilots are under, but they wear pressure suits! In the contact points between lines and glider up to 12 G are possible. “Everything must work perfectly, otherwise you might land directly in the cloth,“ says Pál.

To perform the manoeuvre on such a large wing under such a load will mean immense physical effort (around 50kg) will be required on the steering lines while exiting the manoeuvre. If required, Gabor will help steering via a special connection.

Numerous TV channels worldwide have shown interest in broadcasting the event. Therefore, the experiment will be documented by means of three helicopters, TV teams and photographers.