How to fly XC on an EN A paraglider

This is an edited extract from Fifty Ways to Fly Better, by Bruce Goldsmith and friends 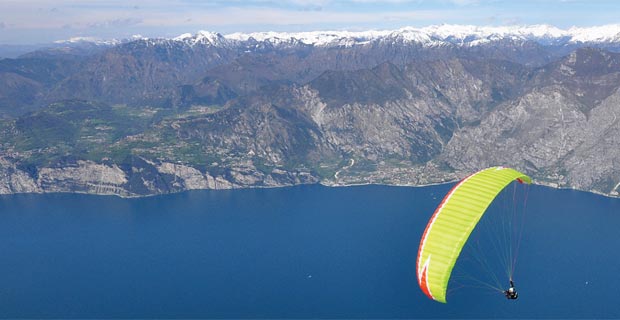 Your EN A glider is very capable of flying XC. It’s the pilot that makes the difference. Photo: From Fifty Ways to Fly Better

Your first wing is your most important one. It is the bedrock of your flying career. You need to be totally comfortable on as safe a wing as possible as you slowly become familiar with the strange, turbulent, ever-changing world of the sky.

And with a modern EN A glider, you have the perfect wing to do just that. EN As climb as well – if not better – than other classes of wing, and I believe offer better ‘real’ performance for early pilots than any other.

Simply put, they look after themselves and let you get on with the job of learning to fly really well. They’re brilliant fun, too. I’ve flown recent XCs on an EN A, EN C and competition wing: the EN A was by far the most enjoyable wing, dispelling all my ideas of dull handling. It was pure joy.

Some would say you shouldn’t move on from your first wing until you’ve perfected your launches, thermalled it to base, set off on your first cross countries and finally wrung the life out of it on an SIV course.

The reasoning is this: as a new pilot, your workload in the air is phenomenally high. You have so much to think about to stay safe. During your first 200 hours, you’re looking to convert as much of that workload to intuition as possible, so the basics – ground-handling, glider control, thermalling and gliding efficiently and safely on speedbar – become second-nature. This’ll allow you to free up some mental space to deal with decision-making, route-planning and so on – and only then are you ready to fly a higher aspect wing.

Indeed, most pilots move on from their first wing far, far too quickly, sold on the empty promise of ‘better performance’, when in reality they would progress far quicker and become more natural pilots by flying their first wing to the absolute limit of their capabilities first.

Here’s how to fly a lower performance wing really well.

1. Learn to climb well
Low aspect wings climb tighter in the core than higher aspect wings. You can spin them up on a sixpence and crank them inside their higher aspect counterparts. The right pilot should be able to outclimb competition wings with them.

2. Learn to ride low saves
Low aspect wings are easier to catch low saves with. Because they don’t move about much, you can concentrate on the feel of the thermal.

3. Fly good lines
Your glide and speed won’t be as good as pilots on high aspect Bs and Cs, so you have to learn to feel ‘lifty’ lines of air. They do exist.

5. Avoid sink
Stay high and under cumulus, or milky patches to stay in good air, and stay on the upwind side of clouds. You don’t get so many plan B, C or Ds because you don’t have the reach, so fly conservatively.

6. Keep learning
To keep learning, make it your goal to keep learning. A lot of us get lazy, and think we’ll get better just by going flying. We don’t. We need to learn from our mistakes and set ourselves goals.

Have you flown a few cross countries? Done an SIV course? Ridden a leeside thermal that feels like it wants your wing anywhere but in the core? Glided on full bar at cloudbase? Because you’re only holding yourself back if you haven’t yet mastered these skills on an EN A first.

To see more of what’s in the book see: