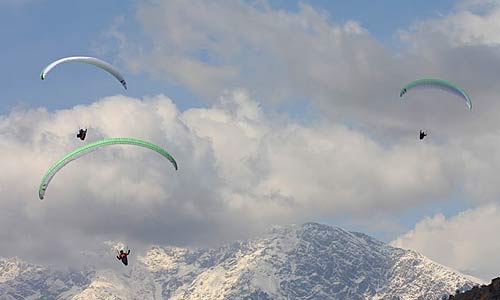 Himalayan Odyssey pilots heading off on their 1,100 km

The Himalayan Odyssey paragliding expedition has ended with members of the team having flown 1,100 km of the Indian and Nepalese Himalaya in 48 days.

The expedition, which started in Dharamsala in the western side of the Indian Himalaya with seven members, headed east along the main chain following the now classic route to the Indo/Nepalese border. By the time the expedition reached the border its numbers had dropped to five.

The traverse of Western Nepal, one of the remotest regions of the Himalaya, saw the number reduced to four when Oriol Fernandez landed alone in the Karnali river system and was unable to rejoin the group.

The team were unsupported on the ground, other than the cell and sat phones they carried and the SPOTS that tracked them. Lynn Jones tracked the team from Delhi and reported their progress on the web.

The expedition ended after 48 days in Bhojpur in Eastern Nepal when the team hit dangerously turbulent conditions for several days in a row. With the monsoon approaching fast they curtailed their mission, which had been to fly 1,300 km and cross back into India.

Cross Country magazine caught up with the remaining members of the team as they made their way back to civilisation. 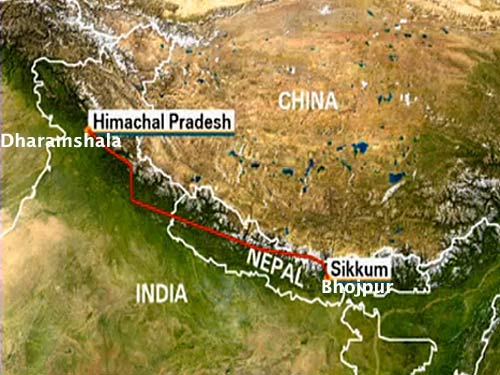 XC: Congratulations! What an amazing trip! Having crossed the Indian and Nepalese Himalaya what was the best area to fly through?

AL: In terms of easiness, beauty, regularity and efficiency of the route chosen, with a real ‘bivy spirit’, for me it was clearly India and Uttaranchal.

BS: North India from Dharamsala to the border of Nepal, we killed it. [There were] some concerns with overdevelopment but flying was easy compared to the rest of the route. Stunning mountain views, clear air, tons of HGV’s [Himalayan Griffin Vultures]. I was able to top land all 11 days, so absolutely no need to look for a take off or do any unnecessary hiking! It was the perfect blend of days camping in the mountains and nights in a village, resthouse or other accommodation. The group split and rejoined continually so it was fun to get to spend one-on-one time with people some days and then be in a group the next.

Flying into the Pokhara valley was really emotional for me. This route has been a dream since I started flying here in 2003. For years I never thought it was even possible for me. To do it – and share with my friends here in Pokhara – wow, amazing!

XC: What was the all-time high of the trip?

AL: That every two to three days we were all together again: either meeting in the sky, by bus or jeep or simply walking. We really tried to promote the teamwork, instead of performance and maximum kilometres covered.

ML: The camping was great. Most of the time we landed in places with snow and firewood, made big fires, cooked and slept together, chatting to local shepherds.

BS: Moving forward with my bros, day after day after day! Getting to a geographical place was secondary and never really the goal – throwing ourselves into a huge adventure and just living it was the real high. Being welcomed by the hospitality of locals in so many places. Not making any big mistakes with route finding, maybe not going as fast as we could have alone or in a group of two but doing it as a group. People stopped at different points, but that was their karma… the way it was supposed to go. That everyone is alive and without major injury proves that.

XC: How much time were you alone?

BS: Just the first two days in West Nepal. The first day I took off just before the conditions became unlaunchable and flew alone for 40 km looking for a good top landing. I lost the wing, ended up with riser twists and didn’t have altitude to sort it out. I threw my reserve, missed the cliffs and tall trees, and landed in a soft bush. Got everything out with help of locals and stayed in a small village. I repacked the reserve and made a makeshift envelope and handle. The next day I took off and promptly got trapped by a valley breeze, had a scary top landing and camped out alone. I wasn’t going to fly the third day but a group of 20 vultures called me into the air. I was still stuck in the valley wind, so I dove north into bigger terrain and strong conditions to escape, then rejoined the rest of the group in the air and we flew 30 km together to an awesome high camp where we caught up on our respective adventures. That was just three days’ adventures.

ER: Not very much, but I don’t remember feeling like that was a problem.

ML: We were sometimes in groups of two or three and caught up with the rest the next day. On my last flight before Pokhara I went down and was alone and far from any takeoff possibilities. I had to walk out for two days to reach the road to Pokhara. 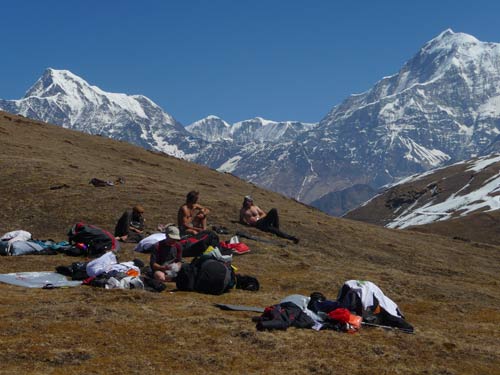 The team waiting to launch on the HImalayan Odyssey

XC: What was the scariest moment?

ML: I got smashed in by some bad dust-devil-type rotor in a nasty small bowl-type valley. I crashed into a narrow ridge trying hard to get the wing over my head again. I finally succeeded with 2.5 m of open wing in the middle and big cravats on both sides. I hit a steep terraced field at full speed and somehow didn’t get hurt. Antoine landed to help me. We both took off again and had a hard time escaping – there were no landing possibilities below us. Eventually I made it out of the valley and landed with Brad and Eric. Antoine later got into the same rotor and had to emergency-land in the same place.

AL: Near Dhorpata a front came from behind and the flying conditions got suddenly very strong, with a lot of wind and lift up to 9.5 m/s. Eric, Brad and I were trapped in a valley going up towards a col at 3,000 m, getting smashed and flying backwards. I chose the top of the mountain, thinking it would be safer, but I made a mistake and was happy to not hurt myself, parachuting a good 10 m into a lee-side hill. There was no other option for me.

ER: On our last flying day I got beaten up by some monster turbulence trying to escape a narrow valley with 40+km/h wind blowing down it and not-great landing options. I was way too close to the terrain and super glad when my glider restarted cleanly, but I still had to deal with the landing. I got on the radio between the blow-up and landing and said something to Brad like “really scary down here!” He was dealing with totally different wind 6 or 7 km away.

BS: You might think the reserve toss, but that was calm and peaceful – it happened so fast there was only time to react.

It could have been watching Antoine fly into horrible rotor twice, thinking I was going to watch him hit the ground – if it was anyone else they might have, but he landed safely.

Or it could have been Day 21 that Antoine talks about – that was the most turbulent flying Antoine, Eric or I had ever experienced in our flying careers.

Or Day 42 in East Nepal – strong, windy turbulent conditions. I wanted to land but there was nowhere safe to do so!

However, the scariest for me was Day 46, our last day of flying. Listening to the normally super-calm Eric Reed calling on the radio his coordinates, that he was in bad turbulence and would be landing backwards in a small place. Realising where he was and that I couldn’t land with him, that even landing close to him would be extremely dangerous. Realising that in the end if my friend radioed he was on the ground hurt, or didn’t radio at all, that I couldn’t be there to help him. That was a helpless, horrible, scary feeling.

Read the full story of the adventures that went on during the 48-day Himalayan Odyssey in Cross Country magazine 130, due out in July. 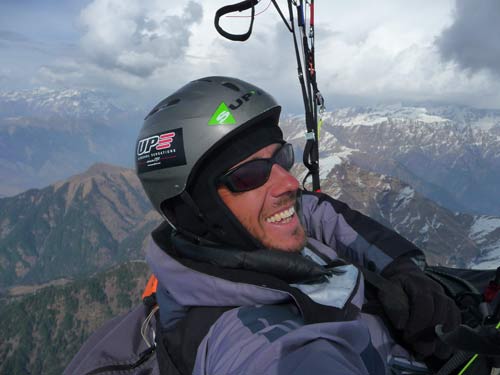 Brad Sander, high above the Himalaya.

Fair use applies to this article: if you reproduce it online, please credit correctly and link to xcmag.com or the original article. No reproduction in print. Copyright remains with Cross Country magazine. Thanks!