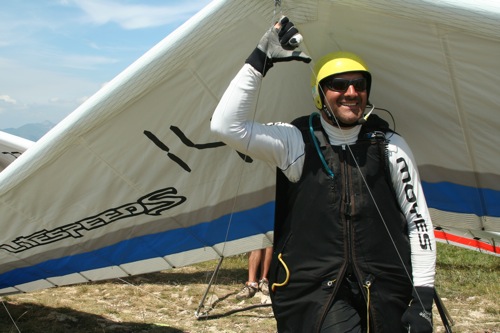 Attila Bertok was Hang Gliding World Champion from 2007 – 2009. Ed Ewing spoke to him

ATTILA BERTOK started flying in 1981 in Hungary. He was crowned the 16th World Champion after winning the World Hang Gliding Championships in Big Spring, Texas, USA in August 2007.

At that competition Attila led from the outset by winning the first three days and staying top for the rest of the competition.

A resident of Australia since 1992, Attila is sponsored by Moyes, a hang gliding manufacturer. He lives in Sydney and is married with a six-year-old daughter.

Perhaps surprisingly for a world champion, Attila is not a fulltime professional pilot. Instead he works as a design engineer for a printer developer company. As he puts it: “I am not making a living out of flying.”

Attila, congratulations on winning the title in 2007. How and when did you start flying?
It will be 27 years in September 2008. I’ve been competing for 24 years. I started in Hungary in 1981 after seeing an advert from a local club. It was basically the traditional way – starting from low hills, lots of work, short glides for a couple of seconds, at best for a minute.

You won the World Championship in 2007. Describe the journey to get to that point.
Well, it started such a long time ago that the beginning is really just a couple of flashes in my memory now. The journey was worth it though. For all the memories of flying, all the people I got to know. And realizing more and more strongly over the years that our purpose on this beautiful earth is more to do with having fun, and collecting pleasant memories, than making the bank account thicker.

What did the title mean to you?
A sense that I’ve completed a task and proved to myself that against the odds I am capable of reaching the peak in my chosen sport. It is good to have the title and belong to the club of the other World Champions – to the other guys I looked up to over the years, and still do.

You defended your title in 2009. How did you prepare for that?
Since I am a “permanently semi-retired” pilot, meaning that I rarely fly apart from the competitions, probably three or four comps a year, I don’t do too much preparation.

I’ll try to go to the site a few days earlier to do a couple of relaxing flights and get into competition mood when the event starts. I listen to the other people who were at the site before. This means basically everyone apart from myself, but I try to turn this to my advantage.

The biggest challenge is to keep the pressure down from my own expectations and take it easy in the first few days until I really got into race mode again.

How do you prepare for the ‘head game’ in competition?
I read as many books or articles on the subject as possible, but every day is different. I just stay relaxed and focused and make the maximum out of every situation. And disregard everything that is not important. The task is the same for everyone, so is the weather. The rest is up to me.

What are your most memorable flights? What are your records?
There are many. One of them is the last flight in Texas on the World Championship and the emotional rollercoaster that comes with such a flight.

[Attila was high and half way through the course, well on his way to becoming World Champion, when he realised his GPS had locked up. The instrument was no longer recording, meaning any flight would be invalid and he would lose the title. He ended up spending a long time derigging his electronic equipment in the air as he raced, nearly dropping everything in the process. He eventually managed to change the batteries and restart the GPS, but slipped several places while doing it. In the end he won the title by only 16 points, due mainly to this incident].

Also, we had a great flight a few years ago in Hay in not so great weather. We ended up flying over 260 km which we thought was not possible.

I also had a 407 km flight when I was sure that I would break the world record (it was 495 km back then) and I ended up landing early after five hours 45 minutes because the weather died completely. I was still happy. It remains my longest flight.

I had a 163 km flight in 1989 in Hungary. The next best was 22 km on the same day, I thought I was invincible! I did it with a glider which we built in a basement with my friend.

We had a task during the Worlds in the Owens Valley, USA, when I and many others got up to 6300m in a glass smooth 10 m/s (2000 feet/min) lift in the Sierra-wave (I think) and we still were not at cloudbase. We then had to glide for 50 km before hitting more lift, but eventually we stayed airborne.

Crossing the Great Dividing Range in Australia from Beechmont, Queensland, for my first time also stands out.

Also in Australia we had a little camp in Wilcannia in 2000 to break a few world records. I got the fastest 200 km triangle world record, which still stands.

But the most remarkable was to complete a 300 km triangle with Tomas Suchanek for the first time in hang gliding history. It didn’t get ratified, because the paperwork was screwed up.

But as far as I know there is only one more completed triangle to date over 300 km with a flexwing hang glider, which Tomas did a few days after that flight. On that day I flew about eight hours and 305 km, my longest duration.

We did an unfinished 300 km attempt about a year ago from Manilla, NSW, Australia, with Gerolf. We both went over 300 km, but we didn’t complete the flight. The stupidity was, that we didn’t look out the window in the motel in the morning, and therefore we wasted about two hours flyable weather. Some 380 km to 400 km would have been possible on that day. But what a feeling to land after sunset!

There was a great one with Lucas Bader a few years ago from Manilla to near the coast. That was only 200 km, but the scenery was simply breathtaking.

Almost all of my great memories are great because there were other people involved in it and we could share the memories. That’s all you’ve got at the end. That little film playing in your head over and over.

Do you ever get scared?
Not really. Sometimes when the weather becomes difficult, like thunderstorms. When I was younger I got sucked up in a storm and I was very happy to stay on the ground alive.

Have you ever had any accidents?
I nearly broke my neck in Hungary at the Europeans in 1996. Basically, I turned to tailwind with no speed left close to the ground and landed on my head. Apart from the plaster collar around my neck I could keep flying. But since then, I’ve learned that the flight finishes with the landing – and not when I cross the goal line.

What’s the worst thing that has happened to you in the sport?
When somebody died who I knew closely. Unfortunately there is more than one example. On a less serious tone it makes me sad when we forget that we are here for the challenge and the enjoyment.

And the best?
Being able to fly after this many years and still enjoy it!

Do you think flying hang gliders is dangerous?
Not inherently, but it requires proper judgement. Most accidents are due to human error.

How do you describe what flying feels like to someone who has never flown before?
Very much like in your dreams. Just start to run on a slope and all of a sudden you are up there. And the view is pretty good. But the truth is that you cannot really dream this feeling, you have to experience it.

If someone said why you fly? What would you tell them?
Because there is no other feeling like it. The rest is just a bonus.

What advice would you give someone who wanted to start out in the sport?
Be patient. For different reasons, but everyone I know enjoys hang gliding one way or another. We do this for fun!

This article was first published on www.chabre2009.com as part of the 2009 World Hang Gliding Championships