BIONICS, the application of biological solutions, is becoming increasingly common in every day lives. You might have heard Olympic sports commentators talking about the shark-skin swimsuits worn by competitors to reduce drag. In aviation we have long looked to the world of nature for inspiration when trying to overcome the technical difficulties of human flight, with inventors such as Igo Etrich and Leonardo da Vinci successfully ’stealing’ ideas from Mother Nature. 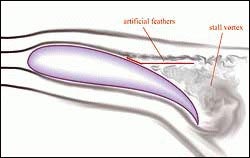 In paragliding, designers have been striving to reduce the speed at which the flow breaks away from the wing i.e. when stalling occurs. If we look at birds, our biological examples, we can see that they are also subject to this problem.

Whilst, as natural born flyers, they are intuitively aware of what is happening and can react unconsciously as they approach the stall point, they also have another ace up their feathery sleeves.

A brilliant construction of nature helps to delay the break away of the flow as long as possible: as the maximum angle of attack is reached, feathers on the top of the bird’s wing upright themselves.

When the air flow starts to break away from the wing at the trailing edge an eddy is released, this eddy travels forward across the wing diminishing lift the further it moves.

The upright feathers on the bird’s wing act as a fence that effectively stops this eddy moving forward, delaying the moment the airflow breaks away and the wing stalls. These eddy brakes are particularly effective during landing when a large angle of attack and maximum lift are required.

So, could such a system be realised on a flexible wing? In the Skywalk development team we were excited to see if eddy brakes could be combined with our proven jet flap technology and made to complement each other, further reducing the stall point and increasing the safety of our wings. 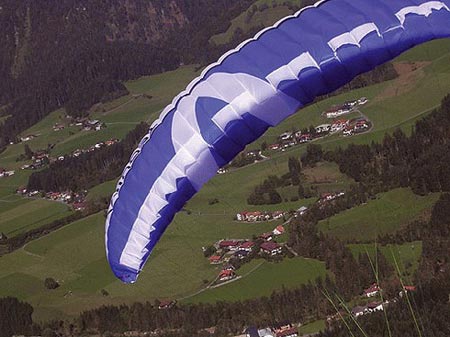 We theorised that the pressure difference between the high pressure below the wing and the low pressure above the wing would open the jet flaps and blow away the beginning of the break away of the flow, whilst the artificial feathers on the cells between would slow down the eddies moving up the chord of the wing.

If gliders equipped with jet flaps can fly 15% slower than conventional wings we would expect that the speed window could be increased even further through the use of artificial feathers!