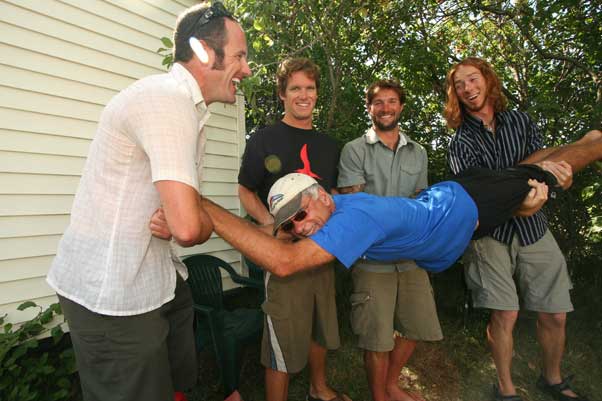 Davis Straub shows he's game for a laugh, with the US Team at a previous Hang Gliding World Championships. Photo: Ed Ewing

Davis Straub is to be meet director at the Hang Gliding World Championships in Forbes, Australia, in January 2013.

Announcing the appointment on his own website, the Oz Report, Davis said he was giving “fair warning” that pilots will have a “great time, with a safe, fair and enjoyable comp.”

Davis has flown for the US national team numerous times and had hoped to make the team in 2013 too. However, he said, “Looks like if I can’t be a pilot chosen to be at the World Championships then I’m fresh meat for being the meet director.”

I’ve been drafted to fulfill my duties to the hang gliding competition community in this capacity by Vicki Moyes, who is organizing the competition. So this is fair warning to all the pilots coming to the Worlds that you’re going to have a great time with a safe, fair, and enjoyable competition.

This also means that I’ll be on site to provide both extended and real time reporting through the Oz Report web site, daily email issues, and Oz Report feeds through Facebook and Twitter. The time offset is such that real time reports will arrive in the evening in the US and morning in Europe. I’ll also be linking to pilot blogs, news feeds and tweets, etc.

The plan is to get to Sydney and then Forbes (driving with Vicki) on December 31st. Towing in Forbes starts on January 1st. The competition starts on the 5th and runs through the 17th with awards on the 18th.

I am working hard now to deal with multiple issues that address fairness, safety and fun. I continue to be impressed with the organization and am quite certain that there will be plenty of resources to carry out a worthy competition. The pre-Worlds was very well organized and much appreciated by the pilots and by CIVL.