The three-day 110km race took place from 3-5 June 2017, and was subject to the mixed weather conditions that have become the norm during its five-year history. It took a blend of flying prowess and leg-power to complete the circuit, which 28 athletes did. Damien crossed the finish line first, on the morning of 4th June. 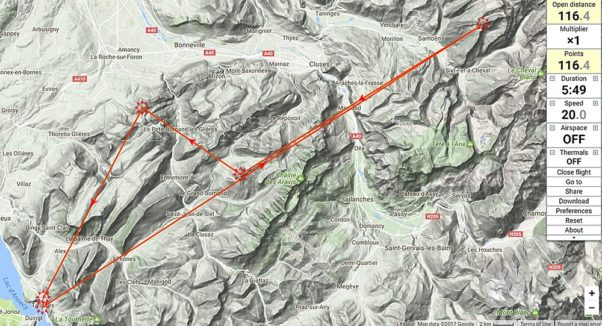 Of the 28 athletes that made goal only one, Edouard Potel, did so in the air, the rest finishing on foot. Chrigel Maurer, who was assisted in Bornes to Fly 2F by his new X-Alps supporter Tobias Dimmler, missed a 16:30 land-by-time instruction that was given out in a morning briefing because of a stormy forecast, and accidentally breached the rule. On landing, he discovered he had to be taken back to where he had been at 16:30. It took a four-hour run to get him back to where he’d landed but he reacted in good humour, smiling for a selfie that was posted on Facebook. He finished in sixth place overall.

Damien Lacaze admitted he had not been the model of good preparation for this event. An ongoing injury meant he had been advised not to run too far, and he almost didn’t take part at all. An eleventh-hour decision to compete meant his assistant was organised a week before the start, the wing the night before and the harness was set up at the start line. He took off on the first flight without even having the route in his GPS!

Damien will be part of team FRA 4 in the Red Bull X-Alps 2017, assisting pilot Benoit Outters. 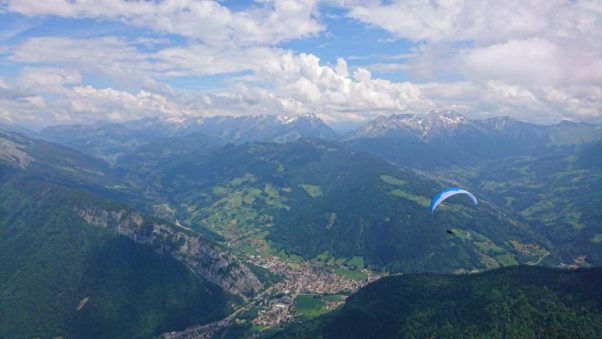 Alistair Andrews during a 45km flight to turnpoint one. Photo: Dan Starsmore

Alistair Andrews, one of three British athletes to take part, made goal on the second day, finishing in joint-15th place with fellow Brit Daniel Starsmore. Alistair gave us his account of the race:

The event was set a few weeks later than it had been in 2016 to catch better weather and a higher snowline. The latter was achieved, but “Born to Hike” does seem to attract rather a poor forecast. Based on this, the organisers set a conservative 110km route from the beach in Talloires, to the North of Cluses, back South to Mont Le Chat, and then finally the summit Sur Cou before returning to Talloires.

Storm day after storm day preceded the comp, and with a similar outlook for Saturday, we started at 10:40 and had a land-by time of 16:30. The day hadn’t got going by the time the racers got to Planfait and Montmin so they kept climbing to Col du Lanfonnet and the base of La Tournette to find better air. Nearly half the field then flew the +40km to TP1 and some even made it halfway back up the tree-lined gorge leading back to Col de la Colombière, finding tiny, committing landing fields.

Shortly after the 16:30 flying cut-off, the sky went black and minutes later went boom with lightning and torrential rain. Well done the organisers! One Chrigel Maurer overflew the 16:30 cut-off by a few minutes, the ensuing penalty ended his chances of a podium finish. The flying on day one and ensuing weather blew the field apart within a few hours. The rest of the evening and most of day two saw the teams hiking, running and orienteering through the fog to find Mont Le Chat and get themselves up the brutal climb of Sur Cou.

Two brief spells of fine weather (we’re talking seconds each time) allowed pilots to get off the summit and make XCs of around 15km back towards Talloires with 15 making goal by the close of day 2.

Day three saw low cloud from the off. Everyone still stuck on Sur Cou had to painfully tag the small radius turnpoint before a bone-crunching trail and road marathon to finish the weekend, all worth it for a dip in the lake. The top three pilots were 1, Damien lacaze;  2, Vincent Lebeau;  3, Tanguy Renaud-Goud. With the majority of the field making goal, it was yet again a brilliantly run festival of the best that paragliding has to offer. 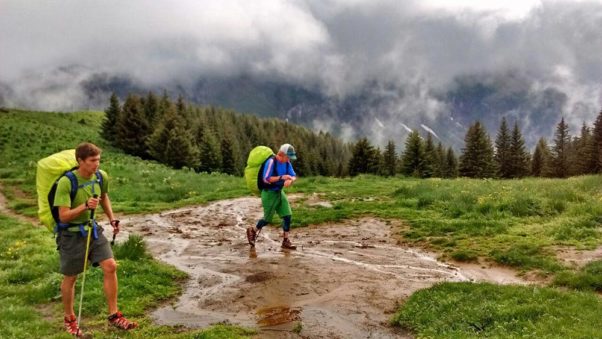 It wouldn’t be Bornes to Fly without a bit of mud and rain .. Photo: Dan Starsmore