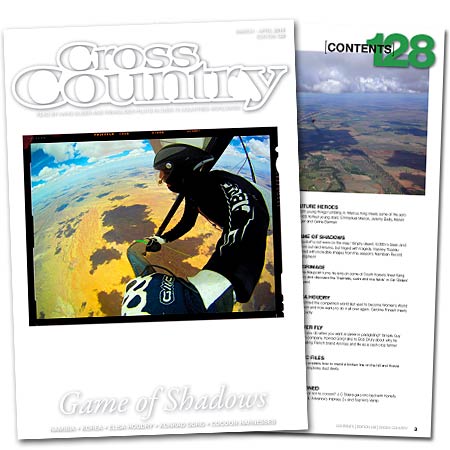 The latest issue of Cross Country magazine is out now. The magazine features a stunning cover shot taken by Vianney Tisseau while hunting hang gliding records in Namibia this season.

Inside, a seven page article featuring more of Vianney’s photographs takes pride of place. The 10-week long expedition to the Namibian desert in December, January and February saw 30 pilots migrate south from Europe. Two world records were the result, but the camp was also hit by tragedy when a car crash killed French hang glider pilot Jean Charles Balembois. Vianney’s article charts the highs and lows of this extreme adventure.

Meanwhile, paragliding adventurer and photographer Jerôme Maupoint has been in South Korea, flying with Gin, who he reports is “treated like a priest” at some of the country’s less-visited paragliding sites.

The mag also features a four-page feature on the Women’s World Champion, Elisa Houdry, who reveals her hunger for competition stems in part from a long illness she lived with in her early-twenties. Better, she stormed the circuit to win gold.

Also featured are four young acro stars – Emmanuel Manon, Jeremy Bailly, Marvin Ogger and Celine Barman. They reveal they all started flying young – really young. Another young face is Konrad Görg, who talks to Bob Drury about why he bought failing French brand Aircross and is now turning it around.

Plus there are the regulars: Bruce Goldsmith, World Champion 2007, explains how to fly in the lee safely, Nick Greece opens his photo albums for a magnificent five page gallery, Chip Miller goes on a Black Op on Abert Rim in a reader’s tale High Life, and the XC Files explore dust devils and explain how to mend a broken line on the hill. Readers’ Photos features the winner of our Facebook competition, plus other stunning readers’ images.

News wise the magazine has four pages of industry and pilot comment surrounding the latest CIVL meeting where the future of paraglider design was discussed, and carbon was allowed. ‘Civl Saves Carbon,’ trumpets the headline.

There are also reports from Stuart Holmes on his Ama Dablam speed fly, Brad Gunnuscio on his win in Monarca, the Forbes Flatlands and the XCOpen in Australia.

Other news includes new rules for Bir / Billing in India, the Speedflying Pro in Les Arcs, format changes to the Paragliding World Cup and the Women’s Paragliding Open.

Plus, there are four pages of new products and an in-depth review of the Go Pro HD Hero, the new helmet-mounted camera specifically designed for airports. This month’s cover shot was taken with one – they’re that good.

If you don’t already, subscribe now to get your copy through the mail, or subscribe online through Zinio.com to read it on your computer.