Switzerland’s Patrick von Känel took second place after a neck and neck sprint to the finish line with Austria’s Simon Oberrauner. Patrick swooped down from the Schmittenhöhe, spiraling above the glimmering waters of Zell am See to land on a floating raft shortly after 1.30pm.

It followed Chrigel Maurer’s arrival on Monday evening, confirming his seventh consecutive win in the hike and fly race around the Alps.

Hot on his heels on Tuesday Oberrauner and France’s Maxime Pinot (FRA1) started the day up front and launched together. Patrick von Känel was a little further back.

But in the battle in the sky it was the Swiss athlete who triumphed. On the last leg to the final turnpoint at Schmittenhöhe he landed, bunched up his wing and sprinted for the signboard, with Oberrauner just 100m below him. Then he quickly re-launched and flew to the landing raft, where the clock stopped.

Patrick said: “We were all so close together. Once Simon was in front, once Maxime, it was just a question who had more luck, and finally it was me.” He said the elation had yet to sink in. “It’s hard to explain the feeling right now.” 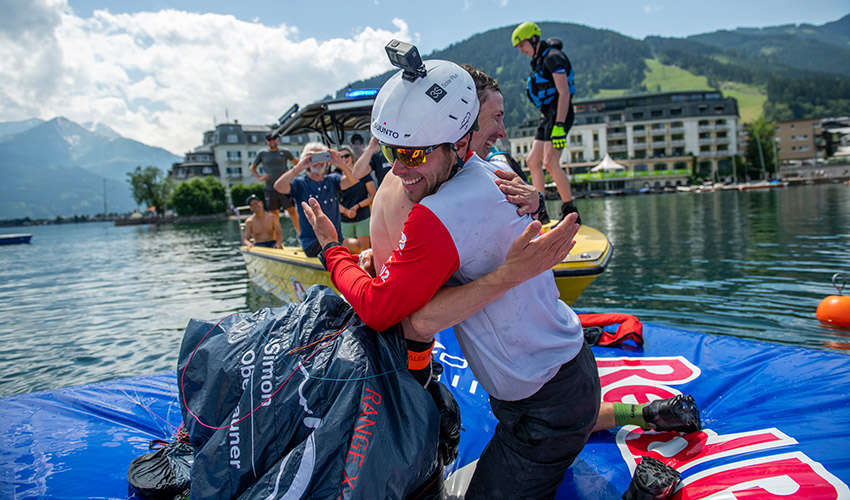 Simon Oberrauner and Patrick von Känel celebrate on the raft at the end of their race. Photo: zooom.at

Oberrauner landed just ten minutes later – missing the raft by a metre and splashing down into the water. He couldn’t contain his jubilation at making the podium. “I am in a very good mood! It’s unbelievable. It’s more than I get ever imagined. There have been moments where I thought, oh my God, it was tough, but I never wanted to quit. I enjoyed it really. I’m here now and just happy about that.”

This year was the toughest edition yet, with athletes having to navigate a 1,238km course across five countries, battling not just each other but also thunderstorms, strong winds and heat.

Earlier, Maurer spoke of his historic win: “Finally I landed here as a winner again for my seventh time,” he said. “It makes it really special to win like this so I’m really happy.”

He added that this year the competition was stronger than ever: “It was a new race for me and it was not clear I would win again. The other athletes are more fit in flying and hiking, there are better teams and we could see that for seven days it was really head to head and really fighting.”

Ulrich Grill the race’s founder and organiser said: “With von Känel and Oberrauner taking second and third we are seeing a new generation of athletes succeeding in this race and I congratulate not just them, but all the athletes who have taken part.”

An hour later France’s Maxime Pinot made a perfect landing on the float any 2.30pm, but he couldn’t hide his disappointment. He had lead the race on Day 1, but slipped in the rankings after sliding down the hill on Day 2 without finding a thermal. He then made a heroic comeback, steadily pushing his way up the field, and three days ago was flying wingtip to wingtip with Maurer around Mont Blanc. For much of the past 48 hours he’s been in second place.

After landing he said: “Of course I am very disappointed. But I would like to congratulate Chrigel, Patrick and Simon. Fourth place is the wrong place, but it had to be somebody.”

On Wednesday it looked like Benoit Outters would get the raft and the finish line. He was hiking as the weather had turned. Behind him, the rest of the athletes still have two days to get as far around the course as they can.