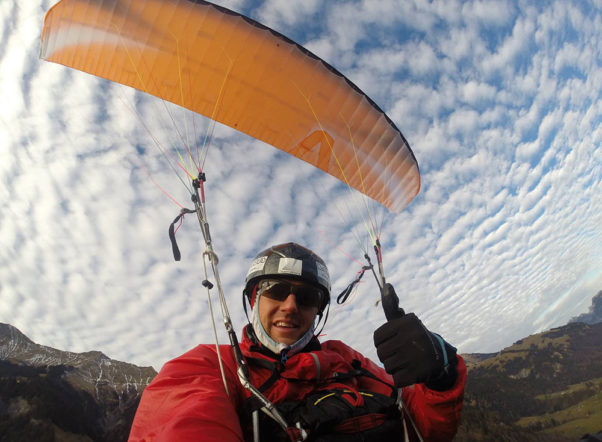 Chrigel Maurer will fly Skywalk in this year’s Red Bull X-Alps, Skywalk announced on Friday 5 May.

The four-time X-Alps champion has been trialling wings throughout spring, and has been flying XC on GIN and Ozone two-liners.

However, according to Skywalk, Chrigel will fly Skywalk for the rest of the hike-and-fly adventure race season, which will include the Red Bull X-Alps in July.

Chrigel said: “The right glider is critical for my personal highlight of the season. Skywalk‘s X-Alps glider is in my opinion the optimal combination of reduced weight, great gliding performance and agile handling.”

The first run-in begins with the Bordair race, tomorrow on the 6th May starting in Aschau.

Posting to Facebook about the decision to fly Skywalk, Chrigel wrote: “Crucial was the union of lightweight, best glide and agile handling. I am also pleased about the collaboration of Skywalk and Salewa, who are X-Alps partners.”

Skywalk added: “The entire Skywalk team is already bubbling with excitement, anticipating the start of the race season. This year is going to be incredible!”

Chrigel flew an Advance wing in the 2015 Red Bull X-Alps, and has been considering his options throughout 2017.

Skywalk is an official sponsor of the Red Bull X-Alps. The commercial partnership sees their wings featured in the promotional photographs from the race. Bagging the X-Alps superstar Chrigel Maurer to fly their wings is without doubt a coup for Skywalk.

In another surprise X-Alps move, GIN Team pilot Aaron Durogati announced last week that he will fly an Advance glider in the race.

The race this year will see two-line technology come to the fore for the first time in the X-Alps, with 12 pilots reported to be flying Ozone Z-Alps. Given good conditions pilots will be flying further and faster than ever before.