‘Paragliding Is Not A Racing Sport’

Just when you thought you’d read every opinion imaginable on the subject of paragliding competitions… here’s another. By Hugh Miller 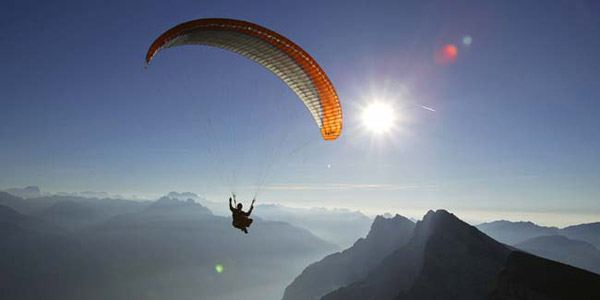 Flying into the glinting last rays of the sun, buzzing from the views and sensations of the last few hours, and excited about the ongoing adventure to be had wherever I land: this is why I fly. And I don’t think I’m alone. The essential freedom of flying is the hook that’s caught us all and won’t let us go.

And amid all the mud-slinging, name-calling and trailing edge checking that’s going on right now at the Paragliding World Cup Superfinal in Governador Valadares, I think there’s a deeper truth that we’ve been trying to ignore for too long. It’s this: trying to make paragliding into a high level professional racing sport has never really worked, and perhaps never will.

It’s always been fun, competing, but we’re just not meant to go really fast in an ‘every second counts’ kind of race. Racing might work as a competitive sport for cycling and athletics, but it’s not a good fit for paragliding, for a number of reasons.

1. We don’t grab our bags and head to the hills to fly as fast as we can. I’ve never rung a friend and said, “hey, this Sunday – lets do a 50km race!” We go flying because we love it, to soak up the views, to try and get to base or fly XC maybe – but if anything, it’s the slowing down and perspective that are such a privilege to experience in our hectic lives.

2. A 60km, two-hour race is plain BORING to watch. We just don’t care! I don’t hear pilots chatting on the hill – “did you see – Durogati did it in 32.45km/h – that’s 0.01km/h faster than Ogden!”  Besides, why are the tasks getting smaller each year? If these are the best pilots in the world, why not encourage them to do 200km on a shady day? That’d be fun to watch. Or call open distance! Jeez – now that’d be an adventurous day out. Or, of course, stick 1,000km of Alpine terrain between a pilot and goal, make them walk if they can’t fly… then we’ll be interested. And there’s a wider debate to be had here too. It isn’t JUST about what the competitors of the day want to do: it’s about the competitors of tomorrow, and the sport of paragliding as a whole, too, and they’re not one and the same.

3. It’s hard to care who wins, when there’s so little consistency in the rankings from one event to another. With such short tasks, and seconds separating everyone, it seems like any one of say 60 pilots might win. Besides, “Who is the fastest” just doesn’t equate with my or many peoples’ idea as to who the best pilot in the world might be (and we already know: it’s Chrigel – and he can’t be bothered with the world cup or FAI events most years either).

4. What hardly gets mentioned is the fact that the turnover in pilots is relentless. Very few stick at it – most give up after 3 or 4 years. It’s a little like a medieval battle, with those at the back marching forwards over the bodies of the fallen at the front, unaware just how dangerous high-level competition is. It’s been the same ever since I started competing in 1994. The lucky realise the risks involved in flying fast aren’t worth it (there are no rewards), and pull out. The fallout rate in paragliding competition is way, way higher than in hang gliding where, interestingly, speed IS safety, making it a GOOD sport for racing.

5. Surveys reveal that the real motivation for pilots entering competitions is to meet our friends and learn to fly a little better. So why not take that as the starting point? Don’t take it all so seriously. Get together and have a blast. The Rat Race, the Ozone Chabre Open, Gin Wide Open and dare I say it – North South Cup – show it’s possible.

6. More rules just don’t work, despite the good intentions behind them. Paragliding is too small a sport to enforce so much regulation. If a tiny minority in our sport want to fly Open Class, let them. If you want to keep flying the same kind of races, go for it. But until the tired old competition formats change, respect for the titles of ‘World Champion’ and ‘PWC Champion’ will continue to be eroded, with attention more and more focused on the winners of the contests we understand, the pilots whose achievements are more in line with the essential nature of paragliding.

So, amid all the chaos, and the distinct possibility that this Superfinal will be invalid, this is a chance to remember who we are and why we do what we do. Forget the entry cylinders and ESSs – whatever they are, anyway – let’s flashmob the good sites on the good days, unroll our wings and fly as high or as far or as stupidly as we can. Competition organisers: let’s move on from these politic-ridden racing events, start afresh, get back to what paragliding has always been all along: freedom.