All smiles on the podium! 1,2,3 for Martin Jovanoski, Jan Jares and Seyong Jung. Photos: PWCA
Comps and Events

The competition was held 1-8 October at two sites, Hadong and Gochang, and saw three tasks over the week.

Task 1 was a 60km race to goal from Hadong. “Although the skies stayed veiled, a 60km task was set,” reported the PWC’s Ruth Jessop.

“There was a nice easterly wind and sun at the start. The thermals were working at take-off but not going high.

“Good task-setting saw three different groups right from the start. The field spread out along the ridge, with the leaders skimming the trees below launch, before jumping over the back.”

The key to the day was to climb high, time it right with the cycles, and connect with the higher mountains behind.

“The crux was after 60-70% of the task when they had the first big valley crossing. The leaders got a good thermal. The second group had a more difficult time, especially as the wind increased.”

In the end only five “valiant pilots” made it in to goal, with Martin Jovanoski winning the day.

Task 2 was an 80km race to goal from Gochang. “A technical day with lots of cycles. The pilots really had to choose their moment to push,” said Ruth.

“There was a lot decision-making about when to stop and climb, when to leave climbs as they got weak. It was important not to get distracted and leave your own climb for what looked to be a better one only to miss the cycle or arrive too low.

“There were lots of different route opportunities, with different clouds to chose from. Though in the flat section in the middle of the race the pilots had blue skies before rejoining the mountains for the end of the task.

“It was a day for staying high and being as efficient as possible hopping from mountain to mountain.”

Flying in Gochang offers views of the ocean and also yellow rice terraces which fill the flats between the mountains.

Gin test pilot Torsten Siegel, who regularly flies in South Korea, summed the day up as “the nicest cross-country flight I have ever had in Korea!”

Eighty-one pilots made goal and the day was won by Peter Budai with Violeta Jimenez first woman.

Task 3 was a 61km race to goal which started off “with perfect blue sky and cumulus clouds” but quickly over-developed, the sky rapidly opening and closing several times.

“The sky would open up, the pilots would leave, go on a glide, and were able to climb in what felt like darkness as the thermals were already there.”

A strong 20km/h cross-wind made the final third of the course difficult, and no one made goal – although the leaders landed with less than one kilometre to go. Takuo Iwasaki won the day.

The final day was cancelled due to strong wind. 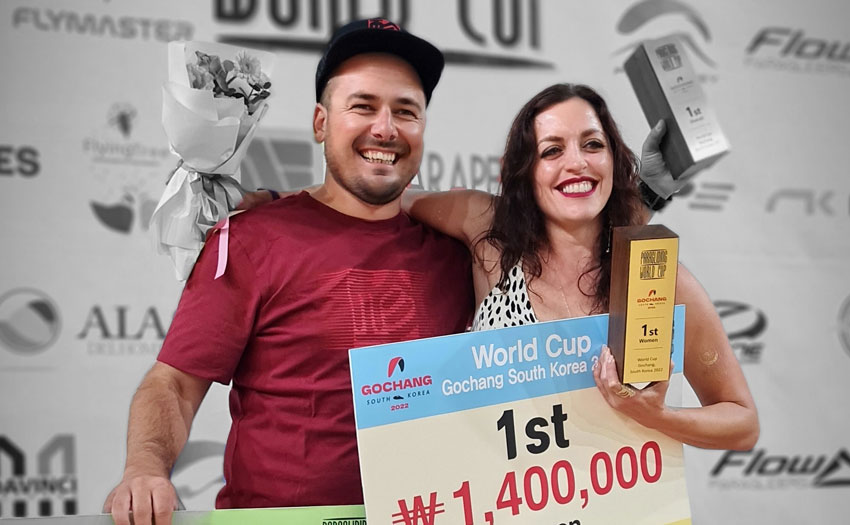 Ruth Jessop, PWCA commentator, said: “What a stunning week. For many of the pilots it was their first World Cup and what a debut they made. In twelfth place, Richárd Gabrieli (HUN, Ozone Zeno 2) was the highest placed newcomer in a very competitive field.

“For many, it was their first visit to Korea. The competition started and ended on a high, with a stunning banquet of local cuisine.

“The scenery of rice terraces and views from Hadong launch across to the islands that dot the south coast of South Korea, filled pilots’ posts on social media.

“The organisation here in Gochang has been fantastic. A big thank you to Gin Seok Song and all his team at the Korean Paragliding Association for organising such a safe and successful competition.

“Many congratulations to the undisputed winner of this competition, Martin Jovanoski. He won two tasks and came fifth in the third. Violeta Jimenez won the women’s rankings with an impressive 100-point lead and a top ten overall place in Task 2.”

The next stop for the Paragliding World Cup will be the Superfinal, Valle de Bravo, Mexico, from 6-17 December 2022.

See all the scores at pwca.org.